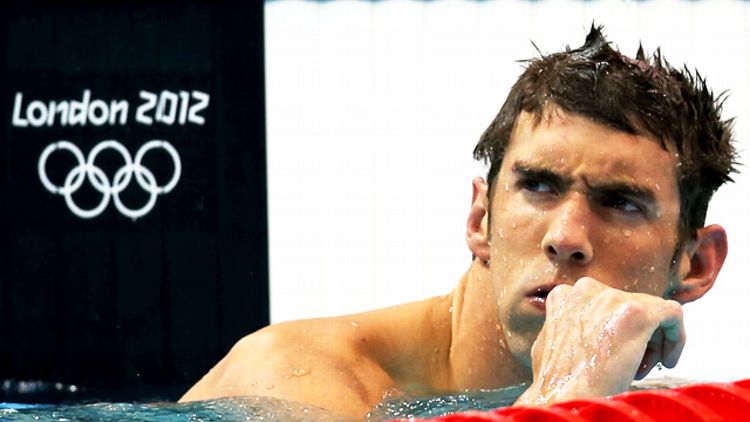 Can you believe the Olympics have only been going on for a couple of days? The past two days of competition have felt like two weeks. Already champions have been made and unseated, rivalries have been strengthened, American TV viewers have utterly lost their minds … and that’s just in swimming alone. Here’s a look at who really rose above and beyond over the weekend: It’s our own Poolside Podium!

Two of the most demonstrative wins of the weekend came not from the usual suspects (Australia, the U.S.) but from China. Sun Yang became the first Chinese man to earn a gold medal in swimming when he won the 400 freestyle on Saturday, and he reacted with a barbaric yawp, his flexed torso rising so far out of the water that it seemed like he was levitating in celebration. (My colleague Shane Ryan did not appreciate the maneuver, calling it an “Overt Display of Righteous Fury”; I didn’t really mind it, but it certainly did have the patina of ‘roid rage that Shane pointed out. More on that in a sec.)

On Sunday, Sun followed up the achievement in the semifinals of the 200 freestyle; this time when the race was over he raised a finger to signify that he’d earned the best time. (Ryan Lochte, who swam in the other semifinal heat, finished second, which means the two will swim side-by-side in lanes four and five in the finals on Monday.) What’s truly scary, though, is that Sun hasn’t even gotten to his best event yet: the 1,500 freestyle, in which he broke a 10-year-old world record last July at the World Championships.

If Sun’s finishes were unrestrained, Ye Shewin’s was totally unexpected. It wasn’t just that 16-year-old Ye, who was funneled into China’s athletics system at age 7 when one of her teachers noted that she had unusually big hands and long legs, won the 400 IM, besting the United States’s Elizabeth Beisel. It wasn’t just that she set a new world record of 4:28.43 in the process, shattering Stephanie Rice‘s prior time by over a full second. (Rice, by the way, was the beneficiary of a surprise visit from Kobe Bryant late last week, who stopped by the Australian team’s practice to ask her to sign a swim cap for his fangirl daughter. He gave her a pair of his shoes. This all happened.)

No, it was the way she finished the race that left everyone gaping. She went fast, and then she went faster, and then she somehow went even faster still. Here’s how fast she was going: Her last lap, 50 meters of freestyle, was faster than Ryan Lochte‘s last lap in his gold-winning 400 IM, 28.93 to 29.10. (Her final 100 split of 58.68 was just three-hundredths of a second slower than what Lochte swam.)

Sometimes NFL players are so good and precise at lunging those necessary last few inches that I forget they can’t actually see the bright yellow first down line on the field that I can see on TV. That’s how it felt watching Ye — it was as if she was actually in the pool with that world record pace line that NBC superimposes on the screen. How else to explain the way she threw herself at it … and then completely left it in her dust? (Or in her bubbles, I guess.)

Well, here’s one way: by wondering if it was perhaps done illicitly. Almost as soon as the race was over, the speculation began. (The comments here are wholly representative.) Was this a redux of the 1994 Worlds in Rome, when China had, in the words of Wayne Wilson in his book Doping in Elite Sport, “the most noticeable demonstration of sudden superiority in the history of swimming”? Was this a resurfacing of the rumored “state-sponsored doping regime” of decades ago? Or was Ye just a fit 16-year-old who got excited on the big stage, turned in a monster performance, and was put under unfair suspicion by a bunch of Sinophobes? To quote the kid in Moonrise Kingdom, “who’s to say?”

Regardless, I award China the weekend’s gold medal anyway. Because let’s be honest: What’s an Olympics without a good doping scandal?

Thankfully, Ye wasn’t the only one to set a new world record this weekend. Two other swimmers, the United States’s Dana Vollmer and South Africa’s Cameron van der Burgh, won gold medals — while putting their names in the history books for good measure.

As a 12-year-old in 2000, the now-24-year-old Vollmer was the youngest kid at the U.S. trials; she didn’t make the Olympic team that year, but in 2004 she won gold in the 4×200 freestyle relay in Athens. Four years later, though, she failed spectacularly to qualify for Beijing, missing the cut in four different events. (She was so distraught that her coaches “essentially stashed [her] away” in Fiji for the duration of the 2008 Games.) This weekend, she was back on the podium after swimming a 55.98 in the 100 butterfly — a time made all the more remarkable considering one of her two swim caps fell off during the race.

For van der Burgh, also 24, the gold he earned on Sunday with his 58.46 time in the 100 breaststroke was his first Olympic medal. (It also helped end Japan’s Kosuke Kitajima’s quest to be the first man to win three consecutive golds in the same event. Just like Michael Phelps in the 400 IM, Kitajima failed to medal.) After the race, van der Burgh stretched out on his back atop one of the lane lines, smiling. Later he said he was looking up toward the sky in honor of Alexander Dale Oen, the Norwegian breaststroker who was the reigning world champion in the 100-meter breaststroke when he died of a sudden heart attack this April at age 26.

“I know that he was probably laughing down at me,” van der Burgh later said, and thinking, How can you go that time?”

But what’s even more impressive about van der Burgh’s time, as well as Vollmer’s, is that they did so while wearing boring old “textile” swimsuits. (I bet you thought that “The Textile Suit-Wearing Record Setters” was the badly translated name of a semi-pro handball team in Denmark or something, didn’t you? DIDN’T YOU?)

What are textile swimsuits? Well, the answer is more so what they’re not, which is “those neck-to-knee bodysuits that were tested by NASA and improved buoyancy and were worn by everyone in Beijing as world records fell left and right.” Remember those things? They were LZR Racer suits by Speedo, and they were banned by swimming governing body FINA in 2009. Regulation suits, FINA declared, must be knee-length, max, and made of a “textile,” although they didn’t specify precisely what they mean by that.

At the time, there were many who feared that some of the records “with The Suit” (the swim world refers to the LZR as “The Suit” the way New Yorkers call their habitat “The City”) had led to times that might not be revisited for decades. Which is why I was so glad to see a few world records fall to the textile-wearing, swim-cap-losing athletes in the first several days of the Olympics. (There’s a good chance Matt Grevers could break another one today when he swims the 100 back.) It’s just kinda nice to nip those kinds of overblown story lines right in the bud. Which brings us to …

He didn’t just win the 400 IM, he dominated it almost from the start, leading at every split, winning by a gulf of more than three seconds, and ensuring that the anticipated neck-and-neck showdown between him and Michael Phelps wouldn’t be taking place quite yet. For his part, Phelps did something that seemed even more difficult than that: For the first time since he was a 15-year-old in Sydney in 2000, he failed to so much as win a medal, finishing fourth.

The insta-narrative was simple: LOCHTE RULZ, PHELPS DROOLZ!!!! It was also easily recognizable from the U.S. trials in Omaha, where Lochte beat Phelps, much more narrowly, in the 400 IM on the first day of competition, riling everyone up. (He then beat Lochte in the next three head-to-head races, something most people seem to have forgotten.)

But there was a key difference between the Trials and the Olympics: In Omaha, by virtue of their top two times in the preliminary heats, Lochte and Phelps swam adjacent to one another in the desirable lanes four and five. In London, Lochte was again in the center of the pool — but Phelps had been exiled to Siberia, otherwise known as lane eight, due to his poor finish in the prelims. (While he won his qualifier, it was such a slow heat that his time just barely sneaked him into the last spot in the finals.)

Phelps hates the 400 IM. After he won the event in Athens, and again after he won in Beijing, he declared he would never swim it again. It was only about a year ago that he changed his mind. And he still finished fourth while swimming in the worst lane. None of these are meant to be excuses; they’re just meant to demonstrate how Phelps’s finish, while certainly as “crappy” as he described it upon getting out of the pool, wasn’t exactly a “choke job” or a “meltdown” or any of the other hyperbolic descriptors that were immediately appended to the result. It was a bad swim in a hard race, and little more.

On Sunday, with the U.S. 4×100 freestyle relay team of Phelps, Lochte, Cullen Jones, and Nathan Adrian set to take to the water, the Australian announcer on whatever online feed I was watching sounded gravely worried while discussing the most decorated swimmer in history.

“You just wonder what Phelps has to offer after that 400 IM,” she said. She practically clucked!! You got the sense that if she were a string-puller, Phelps would be watching the relay from the stands.

Instead, he swam his leg of the race (the second) in 47.15, a faster split than anyone else on his team and enough to give the U.S. a bit of a cushion. But in an almost eerie reversal from the famous 2008 relay in Beijing, in which Team USA rallied to beat France, on Sunday it was France’s Yannick Agnel who overtook the U.S. on the anchor leg for a come-from-behind gold-medal win. The USA anchor swimmer? Ryan Lochte.

That’s how it always goes, isn’t it? The highs are never quite as glorious as you may believe; the lows are never as dismal. In a day Lochte went from world-beater to beaten; Phelps went from “washed up” to “making a statement.” Lochte will most likely win several more medals when it’s all said and done — perhaps starting today with the 200 free — and if I had to bet I’d say that Phelps probably will, too. (If he wins just two more medals, he’ll be the most decorated Olympian, in any sport, of all time.)

Remember, it’s been only two days, and there’s a whole lot of swimming yet to be swum. We’re all just getting started.