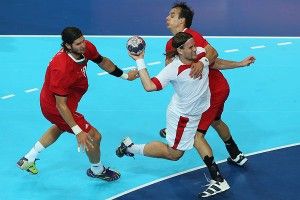 Close your eyes as you read this and try to picture in your mind what I describe to you. Got ‘em closed? All right, now imagine a sport that basically combines all of your favorite sports and sort of resembles that Powerball game from American Gladiators. What you’re imagining seems like a pretty kick-ass sport, right? OK, now open your eyes and grab a towel because you’re about to be so stunned that you’ll spit your coffee all over your trousers: This sport actually exists, and it goes by the name of handball.

After word got to Grantland headquarters that I had made multiple visits to the National Handball Hall of Fame in Tucson, Arizona, I was dubbed a handball expert and was asked by the higher-ups to explain what makes the sport so exciting. My response: “Actually, the Handball Hall of Fame in Tucson celebrates the boring kind of handball. You know, the one that Jake Plummer plays. It is figuratively and literally a poor man’s racquetball, seeing as how it’s racquetball for people who can’t afford to buy a racquet.”

“Close enough,” they retorted. And with that, it was settled — I would spend opening weekend of the Olympics watching a sport I knew nothing about, except that it’s not the same handball that Jake Plummer plays.

Understandably, I was less than thrilled with my assignment, but it took virtually no time at all for my feelings to change. That’s because I quickly realized that handball is the single most exciting sport in the Olympics. And I say that without a trace of hyperbole. It’s the curling of the Summer Games — which is to say that it’s the sport a majority of Americans forget exists outside of election years, yet during the Olympics develops a captivated, cultlike audience.

Since NBC’s TV listings were as helpful as a water noodle in a street fight, I couldn’t figure out when the handball games were going to be shown on TV. This led to me watch all of them online, and I tell you this for one very important reason: All of the games I watched didn’t have commentators, so the only way to figure out what the hell was going on was intuition. Sure, I could’ve just looked up the rules and some strategy guides and solved most of my problems, but there was something endearing about trying to figure out how the game worked on my own. And by endearing, I mean slightly frustrating.

As best as I can tell, handball is like lacrosse without the sticks, helmets, or Native American origins. The goal is to throw a ball past a goalkeeper and into a net, but shots have to be taken behind a line that sits about 20 feet from the goal. However, offensive players can throw at the goal from inside this line, so long as their feet are behind the line when they jump to throw the ball. This means that most goals (which are plentiful, by the way — there are about 50 per game) are a result of guys taking off from behind the line and firing the ball towards the goal right before they land. Which kinda makes them look like that dude from 300 who jumped off Leonidas’s back prior to the entire Spartan army being massacred. If that doesn’t sound exciting to you, I weep for your existence. Being a fan of any of the five most popular sports in America but not a fan of handball is hypocritical because it’s basically a mixture of all five.

Basketball: It’s played in a gym; being tall appears to be advantageous (tall guys can throw the ball over the wall that the defenders make in front of the goal); there are alley-oops and electrifying fast breaks; and just like the refs in the Big Ten, handball refs seem to arbitrarily blow their whistles and make something up if more than a minute goes by without a stoppage of play.

(My only complaint about handball is that the frequency of fouls kills the flow of the game a little bit. I’m sure if I actually knew why the fouls were being called I wouldn’t be so annoyed.)

Soccer: The point of the game is to put the ball in the back of the net; refs hand out yellow and red cards; certain fouls result in something that resembles a penalty kick; and there are hooligans in the stands who paint their faces and chant throughout the game. Also, America sucks at it.

Hockey: There are power plays and a penalty box; substitutions seem to happen when the ball is live; and I don’t understand most of the rules.

Baseball: A bunch of guys throw a little ball around and there’s at least one guy on each team whom you’ll erroneously think you’re more athletic than.

Football: No teams want Terrell Owens to play for them.

In short, I’m pretty positive that handball was conceived by some guys who were just hanging out and smoking the reefer. After an hour or so of taking turns offering enlightening thoughts such as “Can you give a dog pink eye if you fart in its face?” one of the guys had an epiphany, excitedly stood up from his chair, and said, “What if we, like, invented our own sport. We could just, like, combine all the popular sports to make one ultra-super-cool sport that everyone will love. We could make millions!” Stoned out of their minds, all of the other guys looked at each other and in unison said, “Duuude … that’s brilliant!”

And (probably) just like that, handball — the Summer Olympics’ most exciting and captivating sport — was born. If you haven’t been watching, I suggest you start now.