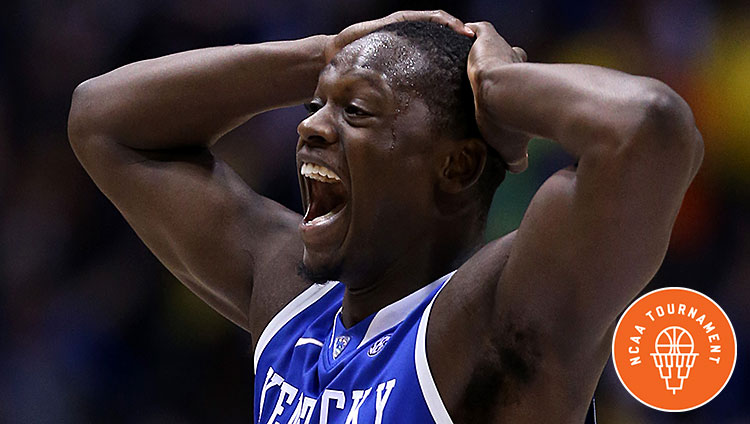 Throughout the college basketball season I’ve been making various all-star teams — the best redheads, the best lefties, the best players from outside the United States. Well, now that we’re headed into the Final Four, it’s time to look at the best performers from this year’s NCAA tournament. Here goes nothing:

I described Wilbekin as “the player Aaron Craft’s biggest fans think Craft is” when I chose my conference players of the year, and the more I watch him play, the truer that description feels. This isn’t a knock on Craft. As an Ohio State alum, I’m required by law to love Craft and think he’s one of the best Rubik’s Cube solvers and digits-of-pi reciters the game has ever seen. But Craft has some flaws to his basketball game that Wilbekin doesn’t have, and it’s also harder for Craft to hide his flaws since he’s not surrounded by half as much talent as Wilbekin is.

So while Craft’s fans try to explain why he’s the quintessential senior point guard, Wilbekin’s fans can just let his play do the explaining. The guy oozes confidence and poise, he’s the obvious leader on a team full of seniors, he’s a defensive-minded player who does whatever his team needs him to do on offense, and he almost never makes a bad decision. Wilbekin has six steals and two turnovers in 140 NCAA tournament minutes this season — that’s how great he’s been. When you consider he’s also averaging 16.8 points and shooting 47 percent from the field, there’s no doubt he should be captain of the NCAA Tournament All-Stars.

If Wilbekin is having the season many thought Craft would have, Napier is having the season many thought Marcus Smart would have. Smart was billed as a point guard who could do it all on both ends of the floor, a guy who was so good that if you surrounded him with even decent players there was no telling how far he could carry them in March. In other words, Smart was billed as exactly the player Napier turned out to be.

I feel bad for driving the “Shabazz is Kemba 2.0” bandwagon so often this season. It’s unfair to Napier to dismiss what he’s accomplished by saying “Kemba Walker did it first.” Having said that, I’m not going to stop conducting this train, because UConn’s national title in 2011 was the most entertaining tournament run in my lifetime (excluding the title game, of course), and comparing this year’s Huskies to the 2011 team brings back floods of great memories. It’s easy to make the Napier-Walker connection based only on their respective UConn teams making improbable Final Four runs and because both Napier and Walker were the best players and point guards of their squads. But the comparison reaches new heights every time Napier makes a huge shot.

Think back to 2011. Imagine it’s a tie game in the second half, the shot clock is off, and Walker has the ball. Would there be any doubt in your mind that he’s making the game winner? Like, if a genie appeared and offered you 500-1 odds on the shot not going in, would you take that bet on the off chance he’d miss or would you realize you’d be throwing your money away no matter how tempting the odds?

After watching him do Gary McGhee dirty in the Big East tournament, Walker could’ve been blindfolded and I still wouldn’t drop a dollar on that bet. I’m almost at the same point with Napier. If nothing else, I’m at the point where him missing a big shot (like one would-be game winner versus Memphis in February) shocks me more than him hitting a big shot. In fact, when Keith Appling fouled Napier as Napier shot a 3 with 30 seconds left in the Michigan State game, UConn up two, and the shot clock winding down, my first thought was this: Great foul. He’s definitely making that fadeaway 3 with a hand in his face and the game hanging in the balance. Might as well make him earn it from the line.

I don’t know who the strength and conditioning coach of Kentucky is, but he deserves a raise and maybe even the entirety of the $300,000 bonus Kentucky’s coaches got for beating Michigan on Sunday. That’s because Harrison’s ability to even get his game-winning shot to the rim proves that he has miraculous strength. Remember: He shot it from NBA range, he had to shoot over the outstretched arm of 6-foot-6 Caris LeVert, and his two-ton set of steel balls was weighing him down.

But Harrison’s inclusion on the NCAA Tournament All-Stars isn’t all due to that one shot. He hasn’t exactly played perfect basketball during Kentucky’s tournament run, but he is averaging 16 points over four games. More important, the Michigan game winner wasn’t his only clutch shot. In fact, you could argue that his corner 3 against Louisville with 40 seconds left, which gave Kentucky a one-point lead, was more clutch than the Michigan shot since a miss against the Wolverines would have meant overtime and a miss against Louisville likely would’ve meant the end of Kentucky’s season. Oh, and he also hadn’t hit a single shot against Michigan until the final eight minutes, when he proceeded to hit all four 3s he attempted down the stretch, including the final dagger.

Somebody get this man a wheelbarrow to help him carry around all that sack.

Randle has posted a double-double in each of Kentucky’s four tournament games. He’s shooting 48 percent from the field. He had six assists against Wichita State. He assisted Harrison’s huge shot against Louisville. He hit two free throws with 13 seconds left to give Kentucky a three-point lead over Louisville. He got Jordan Morgan (Michigan’s best defender and only inside presence) in foul trouble, which led to Morgan barely playing more than half the game. The only bad thing to come out of this tournament for Randle has been that now when someone mentions “the Russ Smith dunk on Julius Randle,” they’ll have to clarify which one.

Considering Randle played the worst game of his career in the SEC tournament immediately before the NCAAs started, I wonder if John Calipari called him to his office and showed Randle the NBA’s rookie pay scale. “After that abysmal Florida game, Julius, you’re projected to be drafted here,” Calipari said as he pointed to what the sixth pick would make. Calipari then pointed to how much the second pick would make and said, “Every time you take the court from now on, it could be the last opportunity you have to get up here. Does that make sense?”

Randle responded, “Nothing has ever made more sense in my entire life.” Then he proceeded to destroy three consecutive top-10 teams.

The starting center for the NCAA Tournament All-Stars is the one guy who would give me nightmares if I were coaching against him. His game against Arizona was a “where were you when it happened” performance. I’ve followed Wisconsin all season and knew exactly how good Kaminsky could be, but what he did to Arizona’s three NBA-caliber bigs was on a completely different level. It got to the point where if I were him, I would’ve called timeout, walked over to Arizona’s huddle, and told Sean Miller: “This timeout is for you, Coach. Take all the time you need to figure something out, because what you’re throwing at me ain’t working.”

I guess that’s my only gripe with Kaminsky — he’s not nearly cocky enough. College basketball is approaching critical mass with its 3-point celebrations, yet the guy who just shredded one of the best defenses in America and single-handedly delivered his team to the Final Four can’t be bothered to do a single loose butthole monocle. Now that I think about it, though, maybe Kaminsky is the guy who will completely turn the 3-point celebration game on its head. Maybe he shouldn’t be doing loose butthole monocles, UConn-style arm swinging, Sam Cassell’s “big balls” dance, or Marshall Henderson’s “I just swallowed a fistful of cocaine and will now murder your family” celebration. No, maybe Kaminsky should follow in the footsteps of Eric Cantona’s goal celebration against Sunderland in 1996 by just standing still and looking into the crowd as if to say, “You all saw that, right?”

The problem with this: As Kaminsky poses for the crowd, the other team would take the ball back on offense and play 5-on-4 against his teammates. But it would be so badass that it might still be worth doing.

Raise your hand if you think the pro outweighs the con.