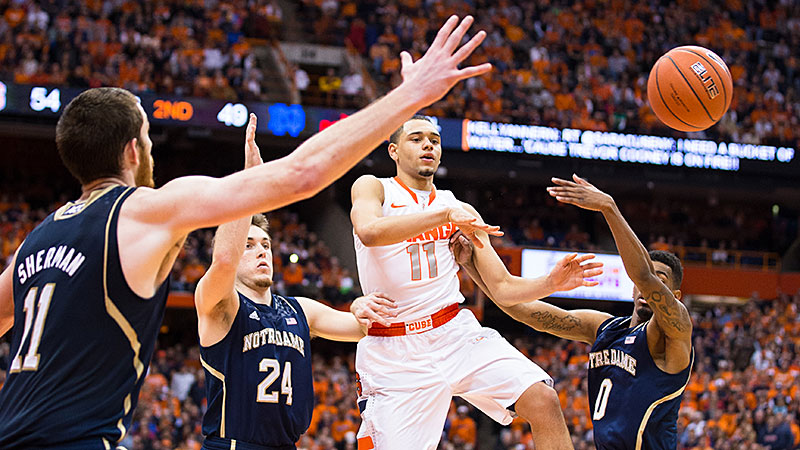 Even casual basketball fans know that the sport has quickly become a global game. Twenty-two years ago, the Dream Team could’ve played blindfolded and still won an Olympic gold medal, mostly because I’m pretty sure half the teams in the field were put together a week before the Olympics and consisted of guys who only wanted to play so they could meet Jordan, Magic, and Bird. Now the game has exploded to all corners of the globe, and international talent has made its mark on NCAA basketball. Canada, in particular, has sent several elite players to U.S. colleges in recent years, leading some fans to wonder if a team consisting solely of Canadian college players could win a national championship (the answer is yes).

With this in mind, I’ve decided to take on an impossible task for this week’s Triangle All-Stars. I’m going to build a team of non-American college players using the Captain Planet approach of naming five starters from five regions. The only exceptions are Antarctica (obviously) and Asia, because there aren’t nearly enough top-flight players from Asian nations in American colleges. (The only guys who really stand out for Asian consideration are Jason Brickman of Long Island University, who is Filipino American and leading the country in assists, and Aaron Craft, who is one-quarter Filipino. But both were born and raised in the United States, so even that’s somewhat of a stretch.)

Ennis gets the starting nod over his compatriots because, as you’ll soon see, the Captain Planet All-Stars need ball handlers in a bad way. That said, Ennis is arguably the best Canadian in college basketball. He’s averaging almost 12 points, six assists, and two steals for the no. 1 team in the country — mind-blowing numbers for a freshman. Sure, Syracuse lost to Boston College at home Wednesday, and sure, Ennis was uncharacteristically bad down the stretch. But it’s crazy to blame him for the loss. He finished with 14 points, eight rebounds, and six assists! Besides, Ennis’s clutch play has bailed out Syracuse countless times this season, which makes him a no-brainer for the Captain Planet All-Stars. I’m assigning him the heart ring because his composure on the court makes me believe he has total control over his emotions, and because he ripped out Pitt fans’ hearts last week.

I don’t love starting Giffey at shooting guard, because he’s not a great ball handler and it’s not pretty to imagine him guarding players like Gary Harris. But the thing Giffey does exceptionally well is shoot the ball. He has cooled off lately, hitting only two of his last 10 3-point attempts, yet despite that mini-slump, Giffey is still tied for 11th in the country in 3-point field goal percentage at 49.3 percent. Because he plays alongside Shabazz Napier, DeAndre Daniels, and Ryan Boatright at UConn, Giffey doesn’t get a ton of touches. That will change on the Captain Planet All-Stars. We’ll let him hover around the 3-point line with his hands up, waiting either for Ennis to drive and kick or for our slew of big guys to pass out to him when they get doubled. And when that happens, Giffey will prove that I was wrong to leave him off the Spot-up Shooting All-Stars by making it rain (hence the water ring).

Garino has put up decent numbers this season — 11.9 points, 4.4 rebounds, and 1.8 assists — but stats can’t tell the story of his game. A finger injury forced him to sit out a handful of games and be ineffective for a few others during the nonconference season. Now that he’s healthy, Garino is playing the best basketball of his career for a George Washington team that’s a lock to make the NCAA tournament. He’s averaging 15.1 points, 5.1 boards, and 2.9 assists over his last eight games, and he continues to be one of the best defenders in the A-10. If you’ve never seen him play and/or don’t know anything about him, this is a good start:

If you can’t root for a guy who cries after big wins and says things like this, then there’s no hope for you: “We’re a family. The team is a family. The chemistry of the team is amazing. We are working since three years ago, so this is our family.” Since none of the Captain Planet rings makes a whole lot of sense for Garino, I’m assigning him the earth ring because getting emotional after a big win and loving his teammates so much suggests he’s pretty down to earth. 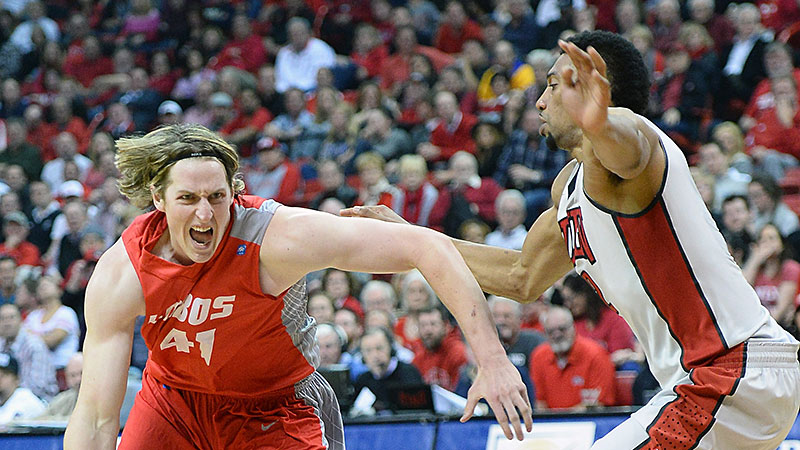 The captain and starting power forward of the Captain Planet All-Stars is the man who is most responsible for New Mexico winning 13 of its last 15 games. He’s also one of the most improved players in college basketball. He has more than doubled his points, assists, and blocks since last season, and the rest of his numbers have also improved significantly. He benefits from playing alongside a great center in Alex Kirk (a member of the Redhead All-Stars, whose association with Bairstow is why Bairstow gets the fire ring), but Bairstow is averaging 20.2 points and 7.1 rebounds per game. Aside from Doug McDermott and whoever Creighton throws out there with him, Bairstow and Kirk form the best big-man tandem in the country. New Mexico, 20-5 overall and 11-2 in the Mountain West, is an 8-seed in Joe Lunardi’s latest Bracketology, and the Lobos host San Diego State this weekend. If you’ve yet to see Bairstow play, tune in to ESPN2 on Saturday night and watch him, Kirk, and Kendall Williams try to put the Lobos in the Mountain West driver’s seat.

If you pay any attention to college basketball, there’s probably nothing new I can tell you about Embiid. So instead of comparing him with Hakeem Olajuwon and discussing his play, can we talk about his great Twitter account? The guy posts Snapchats of himself, talks smack, excessively uses emoticons, and includes “#WeAllFromAfrica” in a lot of his tweets. It’s so engaging that I was convinced the account was a fake until I saw Andrew Wiggins tell his followers to follow Embiid. Because I was the right age at the wrong time, I can’t watch African college basketball players without thinking of The Air Up There. As a benchwarmer who dealt with Rudy stereotypes throughout his college career, I felt guilty doing this because I know how dumb it is to base my perception of an entire continent’s worth of basketball players on a 1990s sports movie. But Embiid is such a goofball that there’s no doubt in my mind that he’d star in the hypothetical sequel to The Air Up There. If somebody points a camera at him and asks him to say, “Are you very sad, Jimmy Dolan? I disappoint you, maybe?” Hollywood might just say “screw it” and finance the film on the spot.

(By the way, I’m using The Air Up There to justify Embiid being assigned the wind ring. If you don’t like that, then just pretend I’m giving him that ring because of his ability to stay out of foul trouble.)

A few additional notes: First, the Captain Planet All-Stars are loaded with big men, which is why Melvin Ejim and Jordan Bachynski missed the cut. Second, right now we’ve got 16 players, but for the tournament we’d need to cut that down to a 13-man roster. To stay true to the spirit of the team, we’ll need at least one starter and one bench player from each region, which means I’ll have to cut a few guys who’d make the team if I just went with the best players. So without further ado, here’s my Captain Planet All-Star depth chart:

When those powers combine … that’s one hell of a basketball team.