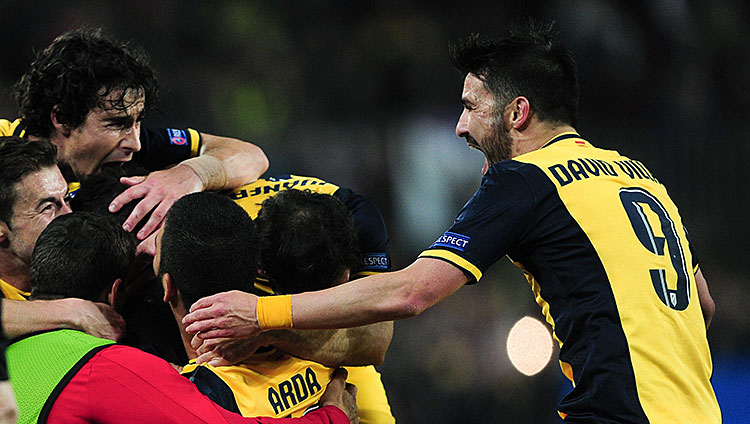 It’s really hard to watch two soccer matches at the same time. All of the things that make soccer a distinct sport — the lack of stoppages in play, the fluid transitions from attack to defense — also make it completely impossible to juggle more than one match at a time. Try to create a RedZone channel for soccer and you’ll end up with just a whole bunch of timely highlights. So, the Champions League quarterfinals scheduling two games at once makes for some angsty decisions. Which game to watch and which to simply be aware of? Sitting at the bar, which TV should I face, and which should I occasionally glance to my left to check in on? It’s an annoyance that the powers that be chose to schedule the world’s premier club competition this way. Except that, sometimes, it’s awesome.

And yesterday was one of those rare times. The surprise opening goals for Manchester United and Atletico Madrid came one right after the other, with just enough time in between to take them both in.

United’s goal was against the run of play, but it wasn’t undeserved. Despite already having had a goal dubiously disallowed, it just seemed so improbable that United could compete with the Bayern juggernaut before this happened:

And then as soon as everybody finished trying to get his or her head around how exactly Nemanja Vidic got his head around that cross, this happened for Atletico, in Barcelona:

That Atletico took the lead wasn’t nearly as shocking as that United had, but the way they did it, with a goal that pretty, from that angle, from a man, Diego, who was only on the field because star Diego Costa had gone off injured in the first half? Stunning, and timed perfectly for a second wave of excitement.

And, at least watching it in a public space, it was literally a wave, an organic version of the horribly manufactured bane of live sporting events’ existence. The unexpectedness of Vidic’s header brought the place to its feet, as supporters and neutrals alike tried to comprehend a world where Manchester United could actually be ahead of Bayern Munich. (We’ll ignore for now that we live in a world where Manchester freaking United are plucky underdogs.) And, just as the excitement subsided, viewers settling back to their seats and drinks and quiet conversations, around it came again, this time thanks to that ridiculously gorgeous Diego strike.

Eventually, United and Atletico both conceded, leaving their matchups at 1-1 heading to the second leg next week. Those games will likely be good, they may even be great (especially Atletico hosting Barcelona, which on paper is a much more even match than United at Bayern), but everybody will have to choose which game to invest his or her time in. And when we do, it’s possible, even probable that we’ll miss some excitement elsewhere. That’s just how more than one game on at the same time works. And it makes the exceptions all the more exciting.