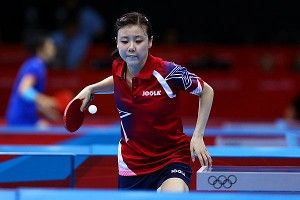 Last night, Ariel Hsing, a 16-year-old American table tennis phenom, almost defeated the world’s no. 2. Amid reports that Hsing would ease off on her training schedule to attend college, Jay Kang felt compelled to lend a little bit of unsolicited advice.

As you make some very important and pressing decisions in the upcoming year, please remember one thing: College can wait. I have heard of the 4.0 GPA suicide pact you made with your parents, and of your Stanford aspirations. There’s no doubt that any college would count “Olympian badass” as a worthy extracurricular activity, and I know that you are itching to join your buddies Bill Gates and Warren Buffett in the world of business. I also understand that you certainly don’t owe us — your rabid fans — anything more than what you’ve already given. It’s beyond selfish for cranky farts like myself to ask you to “Go for the Glory!” when the glory might be nothing more than a half-hour tape-delayed defeat in 2016.

But before you start weaning yourself off table tennis to pursue higher education, before the three hours of daily practice give way to dorm food, exams, and the unbridled, vibrant joy of student life in Palo Alto (this, Ariel, is called sarcasm), please consider Gates, who dropped out of Harvard because college can be pretty pointless for individuals of extreme talent, charisma, and vision. The country has changed drastically in the past 10 years, and the death march of academic accolades and achievement feels less necessary than ever. Better to do something well, no matter how weird it might be, and figure out the money later. The country already knows about the fine, hard-pressed balance you’ve struck between academics and athletics. They know you aren’t one of those gymnasts, who, at the age of 21, realizes she has the same command of the English language as her coach, Bela Karolyi (that’s called a needless dig).

The brain atrophies much slower than the reflexes needed to be a top-flight table tennis player, so even if you do nothing from now till Rio but graduate from high school and practice with all the empty-headed devotion of Forrest Gump, you’ll still be able to go back to college when you’re 20 and be just fine. Organic chemistry isn’t that hard. And even if it is, who cares? Employers now look at a 4.0 college GPA with trepidation, like, “Hey, why weren’t you out inventing a crash-proof Twitter or WINNING THE GOLD MEDAL IN PING-PONG instead of trying so hard in this stupid sociology class?”

America’s Olympic team needs you, Ariel. Right now, they’re a bunch of millionaire basketball players, swimming bros with weird pectoral muscles, hurdlers who cravenly market themselves as virgins to cash in on the Tebow effect, and tightly wound gymnasts who over-tweeze their eyebrows and pretend to be happy for one another (needless digs no. 2, no. 3, and no. 4. Also, I see what you’re doing, Lolo “1997 Britney” Jones … ). We need a Ping-Pong Psycho who whispers at the ball, smashes backhands, and screams incoherently after winning big points. We need the return of the Tiger Woods first-pump. We need you, the child of Taiwanese and Chinese immigrants, to take down the big bad Chinese athletes and bring glory to America’s favorite dormitory sport. It’s been said a million times by sportswriters who specialize in these sorts of rhapsodic, epistolary columns (needless dig no. 5 and SAT prep!): America loves nothing more than an underdog. Last night, you went Jake LaMotta against Ray Robinson. Li Xiaoxia may have won, but she damn well knew she had been in a fight.

Ariel, college is boring. You can learn much more about business by staying committed to table tennis and your Olympic dream. Hundreds of inspired kids woke up this morning and told their parents, “If you really loved me, you’d buy me a Ping-Pong table like Ariel Hsing’s parents did for her.” They will all want the Ariel Hsing Nike table tennis polo and the Ariel Hsing Smash paddle. If movies have taught me anything, you can immediately parlay that endorsement money into a shrimp-boat empire with your best friend, Lieutenant Dan. Don’t forget to invest in Apple.

There is no downside here. You were the unexpected star of the first weekend of the Olympics. Stanford and all its libraries and Jamba Juices will still be around in 2016. Your country needs you in Rio. So wipe the blood off your lip, grit your teeth, and get back to the practice table.