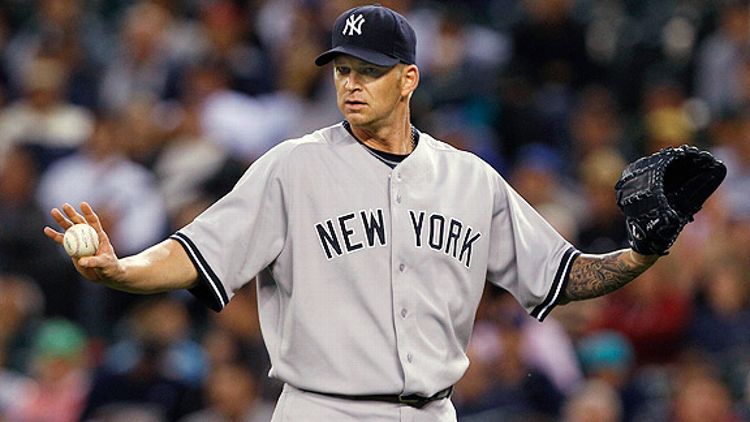 You’re never going to feel sorry for the Yankees.

They have a revenue stream large enough to justify a $500 million payroll, let alone the $200 million and change they spend every year. They can piss away tens of millions of dollars on Carl Pavanos and Rafael Sorianos and shake it off like nothing happened. They can hold clandestine negotiation meetings with an aging Derek Jeter, offer him millions more than anyone else would offer because he’s handsome, and feel good about it. They can twist politicians’ arms and annex acres of parks and public land to build a planet-size, $1.5 billion stadium, turn the best seats into a half-empty fortress of absentee investment bankers, hold you prisoner in your seat during the 7th inning stretch, and sneer at you after you’ve paid a month’s salary to take your kids to a game. Their entire organizational philosophy is, roughly, Deal With It.

Monday? You had to feel something. Because the Yankees just experienced one of the most infuriating playoff losses in a long time.

The strike zone
CC Sabathia’s season-high in walks before yesterday’s game was four. He walked three in the first inning alone last night, six in 5 1/3 innings. Sabathia did have less than his usual stellar command, missing Russell Martin’s glove by wide margins on numerous occasions. And yes, a team bitching about the strike zone can only last so long before it gets annoying. But seriously, look at this strike zone plot. As Shane Ryan noted this morning, Gerry Davis gifted the Tigers with 11 ill-begotten strike calls, versus just four for the Yankees. That doesn’t mean that Davis chose sides or showed bias. Only that he’s the latest glaring example of baseball’s need to automate umpiring, or at the very least impose a uniform strike zone, with stiff penalties for umpires who make things up as they go along.

Jim Leyland’s repeated attempts to give the game away
You can tell yourself every minute of every day that you value process over results, that you won’t let a fluke occurrence sway future decisions. But it’s damn hard to escape basic human nature and that one, immutable arbiter of success: the scoreboard. The Tigers scored two runs in the bottom of the 3rd to tie it at 2-2, then went on to win the game. Ergo, don’t complain about how they handled the 3rd inning, or any other key spot. They won the damn game.

When newly minted no. 2 hitter Ramon Santiago strode to the plate in the bottom of the 3rd, his team trailed 2-0, with runners on first and second and nobody out. Whether through his own control issue or Gerry Davis’ largesse, Sabathia had walked five men to that point, and looked primed to give up a big inning. There is no possible justification for giving up an out in that situation. Not trailing by two, not with a wild pitcher and a generous umpire, and certainly not if you had the conviction to bat Santiago second in the first place, leaning on 24 at-bats’ worth of moderate success against the big lefty as your justification for doing so.

TBS color commentator John Smoltz said, screw all that. “I will walk back to the hotel if he doesn’t square around to bunt. What do you think?” (Raucous laughter in the booth.) “This is why you had him in the number-two hole.”

Santiago tries to bunt once. Fails. Tries to bunt again. Fails. Down in the count 1-2, he gets a pitch he can handle, lines it into left field, and cashes Detroit’s first run.

The Tigers would load the bases with nobody out, but manage only one more run that inning, after Miguel Cabrera bounced into a 6-4-3 double play. So Santiago’s bunt tries didn’t hurt anything. It was still a colossally stupid move.

The sun continued to shine on Detroit throughout the game, even as Leyland found new and creative ways to hand outs to struggling Yankees pitchers. In the 5th, number-nine hitter Brandon Inge reached base to lead off an inning for the second time. Up stepped Austin Jackson, who’d worked two walks to that point. Sabathia continued to labor. Leyland ordered a bunt. Santiago then followed with a double deep into the gap that would have scored Inge regardless. Slotting Santiago to hit second on his small-sample success against Sabathia and his .320 average in 50 at-bats vs. lefties this year, looked inspired, and Leyland got rewarded for his somewhat defensible hunch there.

He just kept raising the degree of difficulty too. In the 6th, Don Kelly singled and Jhonny Peralta doubled him home. With Sabathia on the ropes and Ron Darling wondering why he came back out to pitch that inning, Leyland ordered a other bunt, this time by borderline MVP candidate Alex Avila. The slugging catcher got the runner over…and also rolled his ankle on the play, stepping on Robinson Cano’s foot as he crossed the bag. The Tigers didn’t score that inning, exiting with a two-run lead.

It looked like Leyland’s generosity might finally come back to bite him. In the 7th, Brett Gardner came through with a two-run double to tie the game — following the 9000th big, most unnoticed walk of Jorge Posada’s wildly underrated career, and Russell Martin taking a triple-digit mph fastball to the ribs and casually jogging down to first, because he’s Canadian. But the Tigers would get bailed out one more time, wiping away all the tactical mistakes that might have sunk the Tigers on a less fortunate night.

If you want to be more aggressive in the playoffs, on the theory that every game carries far more weight than a regular-season contest could, go for it. Bring your closer into tight spots in the 8th. Pinch-hit early in the game if a high-leverage situation warrants it. Play the percentages more religiously. Don’t give up any possible edge you can find, no matter how small. But don’t play dumb baseball either. There are appropriate times to lay down sacrifice bunts — tie game, 9th inning, man on first, nobody out, weak hitter and good bunter at the plate, excellent contact hitter on deck, for instance. But they’re rare. Going bunt-crazy falls into the same general orbit as sliding into first base: doting announcers will praise you, teammates will flock to give the bunter high-fives, almost no one will fault you if it doesn’t work, and only a few, nerdy voices in the wilderness will give you flak for it. Still a terrible idea.

Delmon Young’s predictable first-pitch swinging, and Rafael Soriano’s latest disaster
Yankees fans derisively call Soriano’s Seventh-Inning Guy. It’s true that the big right-hander, more often than not, comes in for the seventh inning, acting as a bridge to David Robertson and Mariano Rivera. But the term has come to mean something more, after Randy Levine overruled Brian Cashman and handed Soriano $35 million, and after Soriano coughed up multiple leads in big spots this season.

He proved his Seventh-Inning Guyness again last night, and Delmon Young reaped the benefits. A notoriously aggressive hitter, Young had swung at the first pitch of the two previous at-bats. In the 3rd, he laced a single; in the 5th, with Sabathia struggling, he flied out to center. Everyone in the ballpark knew Young was going to swing at the first pitch he saw. Even Smoltz, who warned: “Be careful on the first pitch here.” Young doesn’t deserve to be mocked for his aggression. Low walk totals and resulting low on-base percentages aren’t anything to be desired. But the first pitch you see often ends up being the easiest one to hit; plenty of very successful hitters had made a career out of whacking first pitches, including the pee-handed Moises Alou. If you get a fat pitch to start an at-bat, swing like hell.

Soriano threw a fastball down the heart of the plate. Young swung like hell. The ball disappeared over the right-center-field wall. 5-4 Tigers. Yankees fans have already started a charity drive to convince Soriano to opt out of the last two years of his contract. Pray for them.

Justin Verlander
OK, there’s not much to be mad about when it comes to Verlander, other than to lament he’s not on your team. The Tigers ace is notorious for saving a little extra for late in the game, and he didn’t disappoint last night. During one stretch in the 8th inning, he threw consecutive fastballs of 100, 100, 100, 101 and 100 mph. Verlander yielded four runs, including a two-run rally that shouldn’t have happened after he retired the first two batters in the 7th. But he pitched well enough to give his team a chance to win, against one of the best offenses in the game, and he looked Verlanderish doing it. The fastball he threw to Rodriguez to end the 6th caught the tiniest sliver of the outside corner, precisely knee-high, impossible to hit, and jaw-dropping to watch. As long as the Tigers stay alive this postseason, we’re going to see a lot more of that Verlander Verve.

Comerica Park isn’t Yankee Stadium
The Yankees hit three flyballs to right-center that died at the warning track. All three could very well have been home runs in Yankee Stadium, which would have changed the entire complexion of the game, and likely resulted in a Yankees win. Of course, everyone else in the league thinks the short porch in the Bronx is a joke, so maybe these were just desserts.

Jose Valverde wins the World Series, the Super Bowl and 100 hot-dog eating contests … every time he records a save
He completes his rain dance by untucking his jersey, revealing a closer corpulence not seen since the Jones boys worked their mustachioed magic in the ’90s. In other words, Valverde is tons of fun for everyone to watch — unless you’re rooting for the team he just beat, after walking three guys and very nearly blowing the game.

The season now rests on the shoulder of one A.J. Burnett
OK, this is bad. But Tigers Game 4 Rick Porcello is no prize pig himself.

Advantage Porcello? Only until you consider that Comerica Park is far friendlier to pitchers (especially right-hander pitchers) than Yankee Stadium, and that pitching in the AL Central isn’t as challenging as battling hitters in the AL East.

Best guess? Both pitchers don’t make it to the 6th inning, and the game becomes a slugging contest.

Which means the Yankees might not be done yet. Not even after a night from hell.

Draw It Up: Blount's Game-Winning Touchdown

OK, Ohio State Fans. Maybe We Don't Have This