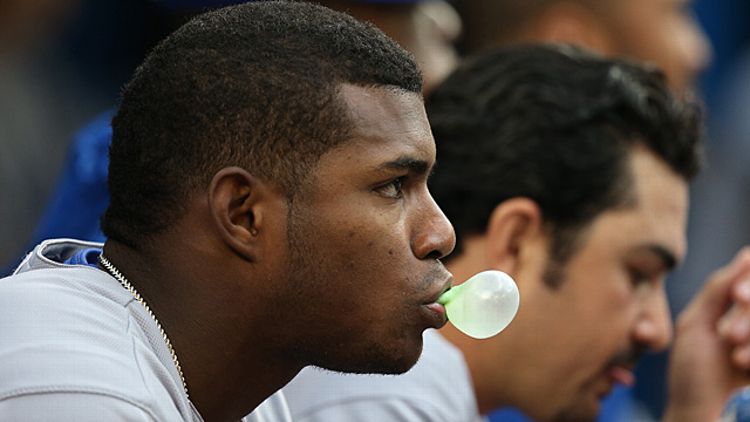 At the beginning of the year, I wrote up a starting nine of the most exciting players at every position, then followed it up with a list of the most exciting pitchers in the game. Completely rewriting the list after half a season would probably be a little silly, but here are some players who missed the cut the first time around who’d definitely make it now.

When Puig first got the call, I mockingly dismissed the idea that he’d immediately become the best player in baseball. Comparing him to Mike Trout was a ridiculous thing to do at the time. But he’s certainly been tremendous fun to watch during the first six weeks of his career, inspiring a level of hysteria that might remind older Dodgers fans of Fernando Valenzuela and Hideo Nomo. He’s inspired probably millions of words of hyperbolic, effervescent prose, to say nothing of a musical tribute act.

And you know what? He’s earned it. He combines natural talent with obvious, constant, homicidal effort on the level of Bryce Harper or Chase Utley. He has the hitting approach of Jeff Francoeur on MDMA, but it doesn’t matter because even with his regression to the mean very much in progress, he’s still slugging .571. Is his .462 BABIP going to hold up? Of course not, but at 22 years old and with only 106 games at any level, he’s going to keep getting better.

He’s made a believer out of me, and if you like baseball and you like fun, you should seek out his games, because he’ll do the same to you.

To adequately describe the joy of watching Cole, one needs to understand the Darvish Moan. The Darvish Moan is the noise you make when, while you’re watching baseball alone, a pitcher throws something so conspicuously nasty that you curl up in your chair and make a noise that’s somewhere between the Catelyn Stark Murder Scream and the Andrew Dice Clay sample from EMF’s “Unbelievable.” It is so named because nobody throws a greater variety of these pitches than Rangers righty Yu Darvish, who was featured in the original All–MLB Network team.

Cole’s a weird case. He’s got enough raw stuff to keep pace with just about any starting pitcher currently working, and he has good enough command to make sufficient use of it. But for some reason, he just doesn’t miss that many bats, so the numbers he’s putting up for Pittsburgh have been kind of generically decent. But with any given pitch, Cole is capable of demonstrating wonders sufficient to make Pharaoh free his slaves, the kind of hopping fastballs and neck-swiveling off-speed stuff that causes you to clutch your chest. If Cole ever puts it all together, he’ll be the most disturbingly awesome thing to hit the Pittsburgh sports scene since Bane.

We’ve covered Machado already in this space, but the Orioles’ All-Star third baseman deserves further mention. There may not be a more exciting defender in the game right now, and Mini Keg would rate as a must-watch player based on his glove alone. He also leads the league in doubles, so, you know, you should go watch him already.

Archer’s repertoire is effective, but not all that remarkable — he hits the mid-to-upper 90s with his fastball and mixes in a hard-breaking slider and a changeup.

What makes Archer so fun to watch is not what he does but how he does it. Archer paces around the mound like a leopard in a cage that’s too small to be comfortable. He isn’t the only pitcher who points up whenever he gives up a fly ball, but nobody does it with such enthusiasm. On a ground ball, Archer not only turns around to see the result of the play, but he turns his body to face whichever fielder is handling the ball at the moment. With his socks and stirrups pulled all the way up (a style that looks excellent in Tampa’s striped socks) and his hat slightly crooked, Archer looks and moves like the oldest kid on the Little League team. He was a pretty highly touted prospect, but considering that the Rays still play in relative obscurity, he’s easy for the casual fan to miss. Go fix that — he’s charismatic and kinetic and you’ll absolutely fall in love with him in an instant.

Finally. This was supposed to happen two years ago, but it didn’t because of a broken hamate bone and the arrival of Hunter Pence and the Phillies’ torturously slow approach to bringing along young players. (Brown’s professional relationship with Ruben Amaro Jr. is not unlike Gretchen Wieners’s relationship with Regina George.)

Well, with a run of 10 home runs in 12 games in May and June, Brown planted his flag in left field and, for the first time in his career, seems relatively certain that he won’t be traded or benched for an older, more expensive player.

And this is to our benefit, because Brown hits the kind of home runs that will warm the hearts of even the most ardent small-ball fans. He has immense pull power, not only yanking balls out of the park with ease, but hitting them so high and so far you can lose your rookie eligibility waiting for them to land.