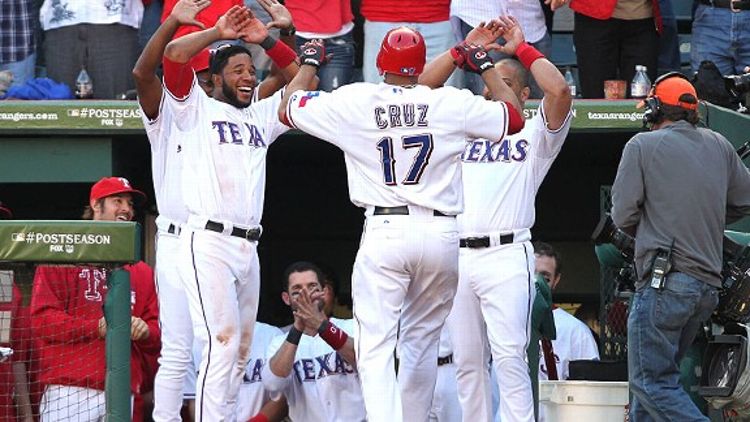 The hosannas rained down on Jon Daniels. The Texas Rangers already had nearly all the ingredients a winning ballclub could want. A potent lineup filled with power up and down the order. Superb defense. The league’s best set of baserunners. A young, deep, talented rotation that barely missed a beat despite the loss of Cliff Lee.

The one trait the Rangers lacked was a dominant bullpen. So when Daniels went into the July trade deadline and snagged Mike Adams and Koji Uehara, then nabbed Mike Gonzalez at the end of August, the baseball world agreed: The Rangers now had no significant weaknesses. Despite their lack of Yankees or Red Sox sheen, they were declared by many as the stealth team to beat in baseball.

Nelson Cruz was the man who danced into the dogpile at home plate last night, having hit two monster home runs to tie and then win the game for Texas. But the Rangers never would have pulled off their dramatic 7-3, 11-inning win over the Tigers if not for that bullpen. Funny thing, though. The bullpen hero wasn’t Adams, Uehara or Gonzalez. It wasn’t even Neftali Feliz, the electric closer with the 100-mph fastball. The Rangers head to Detroit for Game 3 up 2-0 thanks to the pitching staff’s extra man, a fringe right-hander not good enough to crack the rotation. If the Rangers head back to the World Series this October, they can thank Scott Feldman for playing a huge role in making it happen.

He once won 17 games in a season (largely due to his ability to stay healthy and in the rotation all year and get good run support — his peripheral stats were nothing special).

He’s got a kick-ass beard It looks even better six weeks after that photo was taken.

He’s a member of a fairly exclusive club: The Baseball Boychiks.

Feldman and the Rangers got help from a Tigers team that squandered numerous opportunities and a coaching staff that didn’t help matters any. Detroit had fielded a top-heavy lineup for much of the year, carrying several light-hitting regulars; Magglio Ordonez’s injury thinned out their depth even more. Still, even with those shortcomings and the Rangers’ unmatched ability to play matchups with their stacked bullpen, the Tigers ran out a badly injured Delmon Young and two hitters in Brandon Inge and Raburn who struggle against right-handed pitching, making life much easier for Feldman and allowing Texas to stay in the game.

The more curious and probably more damaging move came in a 9th inning neither team will soon forget. After Alexi Ogando recorded five straight outs of his own in relief of Feldman, Ramon Santiago lashed a two-out single to keep the inning alive. Ron Washington, who handled his bullpen very well after another frustrating episode in Game 1, went to Gonzalez to face Don Kelly. It was the right move on paper, even if the result was a bad one for Texas: a stinging double into the right-field corner. What happened next was the most puzzling move of the game from a strategy standpoint, even though it got less attention than several other turning points: Tigers third base coach Gene Lamont held Santiago at third.

Take this with a gigantic grain of salt, given the lack of data here … but the more I watch high-impact, high-leverage decisions in baseball, the more I’m convinced that risk aversion is by far the biggest concern. That’s the case with decisions such as pitching changes, where a manager might save his closer for a save situation so as not to deviate from orthodoxy and leave himself open to criticism. But I’d love to see someone tackle more spur-of-the-moment decisions too. The more baseball you watch, the more it seems like, given fight-or-flight decisions, people choose flight. Wussing out is apparently a primal instinct.

Lamont had maybe a second or two to decide whether or not to send Santiago. It was a tie game, and scoring a single run would have immensely valuable at that moment. There were two outs, which is when you should get more aggressive in sending baserunners. Santiago is a decent runner, not a burner, but competent enough to score from first on a deep extra-base hit. Cruz did field the ball cleanly in the corner. But so many things would have needed to go right for the Rangers to nail Santiago from that point: a perfect throw-in by Cruz, a perfect relay, a perfect catch, plate-block and tag by Napoli. Yes, the man on deck was Miguel Cabrera, the Tigers’ best player, one of the three or four best hitters on the planet. Did Lamont consider the on-deck hitter when making his decision? Maybe. Would Cabrera (or Victor Martinez, if the Rangers opted to intentionally walk Cabrera) have been more likely to knock in the go-ahead run than Santiago would have been to score on the play? That just doesn’t seem possible. Lamont may not have had time to do all the math in this situation, and there’s nothing wrong with going on gut feeling in a big spot. But if that gut feeling is to be cautious to the point of harming your team’s chances, your prudence is much riskier than a so-called aggressive move could ever be.

After Lamont chickened his way to failure, Washington did order a Cabrera walk, did go with Feliz, did induce a Martinez popout, and the Rangers did get out of the jam unscathed.

The rest of the game lit up in flashpoint moments. Feliz escaping the 9th only after Elvis Andrus gave the entire stadium a collective heart attack. Jose Valverde, the worst best closer who ever lived, digging himself into a hole that out-Valverded the usual Valverde — bases loaded, nobody out, bottom of the 9th — then Valverdeing himself out by inducing a popout to left and an improbable gem of a defensive play by Cabrera that went 3-2-3 to end the threat. Max Scherzer pitching an absolute gem given the circumstances (elite team, killer hitter’s park) only to end it in disappointment: After setting down 12 Rangers in a row at one point, Scherzer put men on first and third with one out in the 6th, wiggled his way out of it, got told by Jim Leyland that he’d be facing just one more batter next inning before coming out … then saw that batter hit a ball to El Paso to end his day and tie the game. That batter, Cruz, firing the bazooka blast off a 94-mph, chest-high fastball that ended with the upper deck’s facade getting dented. Raburn nearly ending his life on a freak collision with an 8-foot Davy Crockett. And Cruz cementing his reputation as the biggest postseason hero in the history of a franchise with his walk-off grand slam in the 11th.

It was one of the most memorable games of a playoff season that’s been flush with drama — the best of it probably never happening if not for the tall, bearded afterthought on the mound who saved the day.