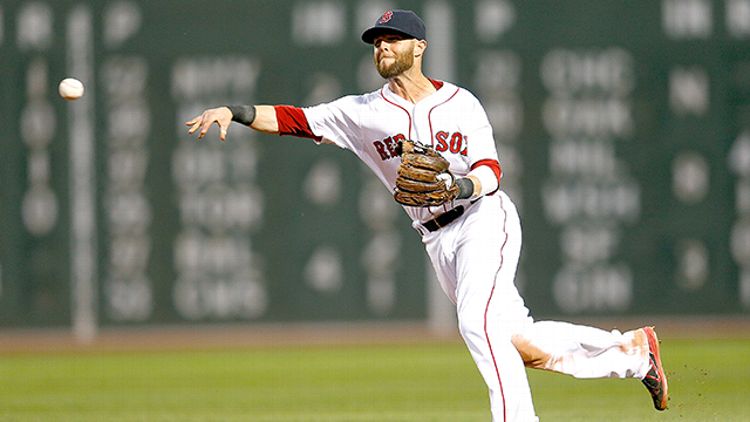 Two AL East contenders made moves Tuesday, one of them a win-now play, the other with an eye toward the future.

The Red Sox locked up their franchise player, signing Dustin Pedroia to a seven-year, $100 million contract extension. The All-Star second baseman is making $10 million this year and another $10 million next year as part of a six-year, $40.5 million deal signed in December 2008. His new contract wipes out the $11 million club option the Sox held in 2015 and replaces it with the first guaranteed year of a deal that will run through 2021. We’re still waiting on more precise details, with the contract likely to escalate in value to account for inflation and the rising cost of talent. For now, all we know is that its average annual value will be $14.3 million.

To evaluate this deal, let’s first consider the kind of player Pedroia is right now. A career .303/.371/.457 hitter, Pedroia is an extreme contact specialist, with an 8.9 percent strikeout rate that’s the 15th-lowest among 457 players tracked since 2006, when his career began. Players who put the ball in play that frequently tend to be aggressive early in the count, thus generating low walk and pitch–per–plate appearance rates; the top two P/PA hitters in baseball this year are Mike Napoli and Adam Dunn, two of the whiffiest batters in the league. But Pedroia has ramped up his walk rate to a near-career-high level of 11.3 percent this year and ranks a solid 17th in P/PA. He’s a grinder in every sense of the word, other than not being a delicious sandwich (as far as we’re aware, anyway).

Pedroia isn’t a huge home run hitter, carrying a career Isolated Power (slugging average minus batting average) number of .154. But he’s been a doubles machine, cranking 266 two-baggers since the start of the 2007 season, second only to the player against whom he’s most often compared, Robinson Cano. Pedroia has become a master of banging balls off the Green Monster to get those doubles, with career home numbers of .322/.387/.502 versus .284/.354/.412 on the road. That makes him potentially less valuable to other teams, but with the Sox obviously not leaving Fenway any time soon, Pedroia could continue to take advantage of the ballpark’s quirky dimensions.

He has been and remains one of the best defensive second basemen in the game, with only Mark Ellis and Chase Utley producing better per-150-games results since 2007. Originally a shortstop, Pedroia’s range and arm strength dwarf most rivals, and should serve him well when he eventually loses half a step as he ages into his mid-30s. He has also been mostly durable, save for a 2010 season in which he played just 75 games (and still put up good enough numbers to make him a three-win player). Pedroia did suffer a fairly serious thumb injury last year but mostly played through it and saw his numbers suffer as a result; you could argue for or against his toughness and refusal to take a seat.

We’re not big fans of playing up intangibles round these parts, so we’ll go easy on Pedroia’s status as a team leader and max-effort player. And while people who have measured these things argue that keeping recognizable players long-term is good for business, Red Sox fever is so ubiquitous in New England that you have to think fans would pack Fenway Park and flip on NESN no matter what, assuming the team doesn’t become terrible for multiple years in a row.

But even if we discount those tough-to-quantify factors (and the Red Sox aren’t), Pedroia’s deal looks like a steal based on simple math. Since taking over the full-time second-base job in Boston in 2007, Pedroia has been a consistently above-average player. He’s netted at least three Wins Above Replacement in each full season of his career, with a high of 7.6 WAR in 2011 and an average of slightly less than five WAR per season. Pedroia turns 30 next month, and his new deal doesn’t kick in until 2015, when he’ll be 31 on Opening Day. Let’s be pessimistic and say Pedroia is a four-win player by 2015, then subtract half a win for each of the following six seasons, with him ending up a one-win player (a below-average regular or a bench player) in 2021, the year he turns 38. That would net Pedroia 17.5 WAR over the life of his contract. The current value of a win on the open market, based on recent free-agent prices, is about $6 million. That would make Pedroia worth $105 million over those seven years, producing a small profit on the $100 million the Red Sox will have spent. Even that math isn’t favorable enough to Boston. The combination of inflation and increasing industrywide revenues means we should expect salaries to rise, such that the cost of a win could be significantly higher than $6 million a few years down the road — which could make Pedroia an even bigger bargain.

No contract comes without risks, and Pedroia’s has a few. For one thing, there’s the oft-cited notion that second basemen tend to break down earlier than players at other positions. To that we say such an idea might be a simple case of selection bias, given second basemen are already often players deemed incapable of playing shortstop — and we’ve covered Pedroia’s superior defensive skills already. There’s the idea that any major financial commitment could put Boston at risk of going over baseball’s luxury-tax threshold — but that number should continue to rise as the years go on, as it’s already slated to do, up to $189 million, next year. There’s also the thought that giving any player (much less a player in his 30s) a seven-year deal is automatically a bad idea. But the numbers here aren’t anywhere near what the Albert Pujols–level kajillionaires are getting. Paying a player about $14 million a year starting in 2015 means you’re pegging Pedroia as roughly a two-win player, which is akin to a league-average player — about what Shane Victorino and Ryan Dempster are making now. In all likelihood, Pedroia will be better than that two years from now, such that the Sox will likely turn a profit on the contract in those first two or three years. Yes, Pedroia could be something of an albatross by 2020 or 2021. But that’s just the cost of doing business, in which you accept that an investment might not look good five, six, or seven years down the road, knowing it’s a terrific bang for your buck on the front end.

There’s one more angle here, too. Pedroia is 10 months younger than Cano. And while the two players have somewhat different skill sets — Cano hits for more power, while Pedroia is a better defender and steals more bases — they’re fairly similar players in terms of total value, with Cano ahead by a bit. Cano is about to hit the free-agent market after this season, where he’s likely to earn $200 million or more, whether from the Yankees, the Dodgers, or maybe a #MysteryTeam. Getting Pedroia’s signature on a deal now means the Red Sox won’t have to deal with any supercharged comps from Pedey’s Yankees rival.

All told, this was a good day to be a Red Sox fan.

The Orioles pulled off a bit of a surprise, snatching Francisco Rodriguez from the Brewers at a time when multiple reliever-hungry teams were rumored to be after the veteran righty closer.

The Red Sox and Tigers were known to have sent scouts to follow K-Rod in recent days, while the Dodgers and other teams were said to have interest, too. But the Orioles beat all comers, and you can see why. Last year, Baltimore relievers racked up more value than all but three other teams. Closer Jim Johnson in particular fared well, posting a 2.49 ERA and a 62.3 perfect ground ball rate while allowing just three home runs all season. Still he got a big boost from a career-low .251 batting average on balls in play, which seemed like it might regress in future seasons. It has this year, with Johnson’s ERA jumping by more than a run thanks to a 65-point spike in his BABIP … even as his strikeout rate has also climbed compared with last year’s level. Johnson’s pullback has been part of a bullpen-wide dip in which Baltimore has been closer to the middle of the pack this year. In acquiring Rodriguez, the O’s hope to gain insurance if Johnson’s sinker betrays him, fortify a setup corps that’s leaned heavily on sidearming wonder Darren O’Day for the second consecutive season, and allow a less talented reliever to move down to lower-leverage work.

Rodriguez’s superficial results suggest he has the chops for the job. Once a fastball-slider pitcher who was essentially unhittable, K-Rod ditched the slider and started throwing curves and changeups. The results seem to be there, with Rodriguez posting a 1.09 ERA this year with more than a strikeout an inning.

On the other hand, K-Rod’s fastball velocity peaked seven years ago at about 95 mph, and now skirts 91 mph. He’s inducing far fewer swings and misses in the past two seasons than ever before. He owes much of his success to a .250 BABIP (career .276) and 99.1 percent strand rate, both reflected in fielding-independent results that are two runs higher than his ERA. Granting that he’s made only 25 appearances this year and this stat could just be a smallish-sample fluke, a career-high 50 percent fly ball rate when you’re throwing 91 mph makes you wonder if a home run spike might be coming.

K-Rod figures to replace a Quadruple-A arm like Jairo Asencio, so he’s almost guaranteed to help, at least a bit. But he’s just a year removed from a near-replacement-level season, and using xFIP to account for his aberrant home run–to–fly ball rate, you get a pitcher who’s no better this year than last year, despite his ERA being more than three runs lower. This could end up being just a marginal upgrade for the O’s.

The good news is Baltimore didn’t give up a ton in its attempt to upgrade the pen. A sixth-round pick from a Tennessee high school two years ago, Nick Delmonico is hitting a decent but unspectacular .243/.350/.469 in the Carolina League this year, just past his 21st birthday. He split his time between first and second base last year and has played third most of this season; his defense is considered subpar wherever he plays, meaning he’ll have to rely on his bat to have a shot at major league success. He’s shown a strong walk rate in each of his first two minor league seasons, but striking out more than once every four at-bats this year isn’t a great sign. Heading into this year, Baseball Prospectus rated him the sixth-best player in a farm system that got weak in a hurry after top pitching prospects Dylan Bundy and Kevin Gausman. In other words, Delmonico is something of a lottery ticket like the vast majority of prospects, let alone prospects this far from the big leagues.