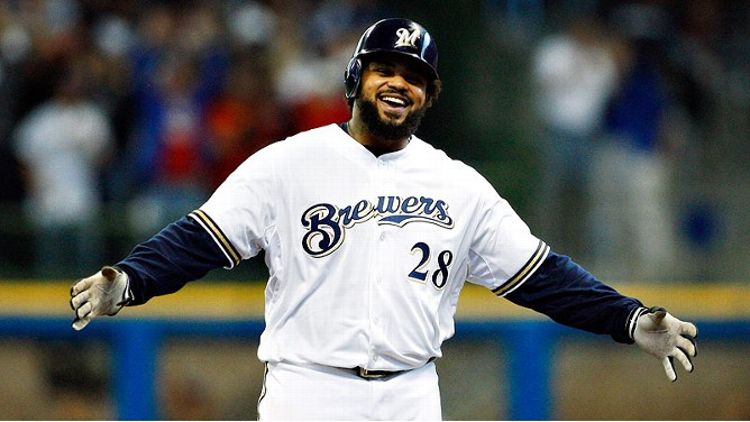 The Detroit Tigers agreed to terms with Prince Fielder on a nine-year, $214 million contract, upgrading the American League arms race to a full-on nuclear war.

The Tigers were known to be seeking a bat after Victor Martinez tore an ACL, knocking him out for the season. Still, talk had centered on bit parts like Johnny Damon replacing Martinez at DH. The Nationals were thought to be the leading contender for Fielder’s services, with the Rangers saying earlier Tuesday they were likely out of the bidding. No one had pegged the Tigers as the most likely destination, least of all on a nine-year deal. Given that just last month Albert Pujols signed a monster deal with a team no one expected, we probably should have known better.

Fielder offers a smidge more value than Johnny Damon. ESPN Insider’s Dan Szymborski ran a ZiPS projection for Fielder over the next nine years. Here’s what he got:

Those early-contract numbers might look a tad pessimistic, given that Fielder’s coming off a season in which he hit .299/.415/.566 and racked up 5.5 wins above replacement, and he’s just 27 years old, smack in the middle of the age range in which the average major leaguer peaks. But for all of his power potential, Fielder is a lousy defender who’ll play either first base (poorly) or DH. That means he needs to hit a metric ton to yield as much value as a player manning a premium defensive position, like Matt Kemp or even Dustin Pedroia.

Still, those homers will play anywhere, including Detroit, a roughly middle-of-the-pack park for offensive production over the past three years, though one that’s much stingier on home runs than Fielder’s old place of employment, Miller Park. The Tigers’ lineup got thin in a hurry behind Miguel Cabrera, and looked especially barren from the left side. Problem solved.

Detroit’s defense will remain ugly at first base, though. FanGraphs rated Fielder the fourth-worst starting first baseman in the big leagues last year, with Cabrera sixth-worst; flip 'em and you’ve got Baseball Info Solutions’ defensive rankings for 2011. Both players have looked for Mr. Goodbar (and found him), so it’s only going to get worse from here on that front.

The major concern, of course, is how Fielder ages. At first blush, the $214 million he got through age 36 looks a lot better than the $246 million the Angels are paying Albert Pujols through his 42nd birthday. But there’s never been another player with his dimensions in baseball history. That doesn’t necessarily mean certain disaster: There’d never been a pitcher quite like CC Sabathia before the Yankees gave him a seven-year, $161 million deal. When Sabathia opted out of the deal after three big seasons, the Yankees didn’t hesitate to re-sign their behemoth ace. ZiPS sees Fielder as an average player by year seven of the deal, and near replacement level by the end. But ZiPS has no more experience in projecting a 5-foot-11, 275-pound player than any of us do, either.

Just to be clear, I’d rate the chances of Fielder earning out the $214 million on his contract as slim to none. We don’t have exact comps for someone of his carriage, but we have plenty of evidence that burly sluggers with no other discernible skills tend not to hold their value all that well over time. If you want to use that other round Tigers slugger named Fielder as Exhibit A against Prince … son’s a lot better than dad, but can’t say that I’d blame you.

There’s already been some talk that Cabrera might see some time at third base [note: Spanish-language site], where he logged some time early in his career. This would be a colossal mistake. Cabrera broke into the big leagues nine years and 30? 40? 50? pounds ago. The projected batting order posted by MLBDepthCharts.com looks fairly reasonable …

… but if Cabrera plays third all season, he could go down as one of worst defensive third basemen in decades, potentially cost his team up to three wins with his glove, and prompt Justin Verlander to defect to Vanuatu. It’s not like there are any great DH options sitting out there that would make moving Cabrera a logical choice. Tigers fans better hope and pray this is just early cover while the team figures out how to finesse the Victor Martinez situation. Just over a year ago, Detroit handed Martinez a four-year, $50 million contract to be the team’s DH; there’s a good chance he’s already played his final game as a Tiger.

Here’s what we do know: The Tigers will pay Fielder, Cabrera, and Verlander about $64 million in 2012. Spending that much money on so few players may very well come back to crush them down the road. But for now, they’re the odds-on favorites to repeat as AL Central champions because of that star power. The Royals and Indians were intriguing little sleepers with an outside chance to challenge for the division crown before the Fielder deal. You can now call them, the White Sox, and Twins extreme long shots to win the division. If anything, Fielder landing in Detroit could prompt Kenny Williams to be even more aggressive in rebuilding on the South Side, maybe even nudge the Twins to strip down a few non-Mauer parts — if not now, then likely later this season.

More broadly, the Fielder deal is just the latest blockbuster for an AL pennant race that could be one of the best in years. The already-strong Yankees overhauled and greatly improved their rotation; with Pujols, C.J. Wilson, and a ginormous TV contract in tow, the Angels look like Yankees West; and they’re probably not even the best team in their own division, with the Rangers looking primed for a possible third straight trip to the World Series. That’s not even mentioning the Rays (three playoff berths in the past four years and an improved lineup for 2012) or the Red Sox. If baseball waits until 2013 to add a second wild-card team per league, Labor Day through the end of October could produce some unfathomably great baseball.

Finally, a message from the desk of Scott Boras: Told ya.