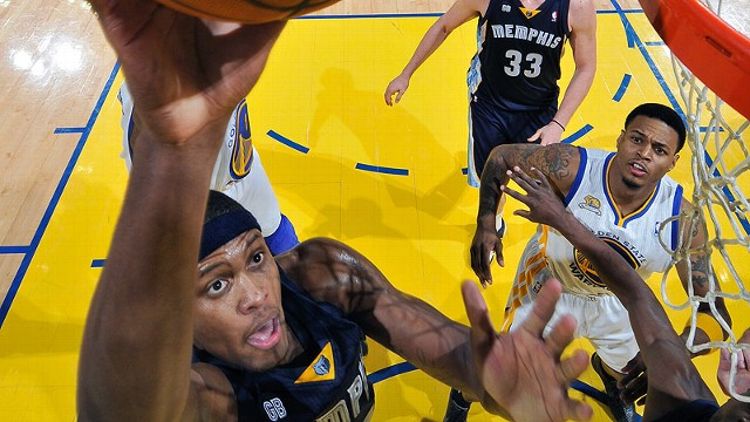 During last season’s playoffs, the Memphis Grizzlies were a shocking success story, knocking out the Spurs and taking the Thunder to seven dramatic games before being knocked out. But in some ways seeing the Grizz sitting atop the Southwest Division (albeit by a matter of a few win percentage points), after nearly a month of the 2011-12 season, is almost equally impressive.

What’s even more impressive is the way in which the Grizzlies are competing; they’re seemingly playing at a playoff-like temperature already. Reading quotes from postgame reports, you get the sense that the togetherness and resolve that carried them through their 2010-11 playoff run has carried over to this season.

After Monday night’s come-from-behind win over the Warriors, Rudy Gay, who scored three points in the final 23 seconds, had this to say: “We showed what we’re made of. We showed our toughness. There was a lot of yapping in the huddles. We went through a lot to get it.”

It was just the Warriors, man! Relax! Or don’t! Because the Grizz need a little fire in their bellies right now. After all, they’re going into battle without their star power forward and beating heart, Zach Randolph.

When Z-Bo collapsed early in the season, tearing a ligament in his knee, I thought I heard the distinctive sound of Cinderella’s glass slipper shattering. There was no way the Grizzlies could repeat last season’s success without their leading scorer and rebounder, right?

Wrong. You hear that sound? That’s the sound of M-Town chanting “Ru-dy! Ru-dy!” The Grizz have won seven straight and Rudy Gay has been the leading scorer in five of those contests. It makes a weird kind of sense; in the absence of Randolph, the engine of last season’s playoff triumph, Gay, a player who was absent for all of that playoff run, has come into his own.

Maybe, since there’s not the obvious A1 option in the post, the ball is moving around more. Maybe guys aren’t ready to let go of last season’s elation. And maybe head coach Lionel Hollins isn’t willing to let them do so. The coach’s take on Randolph’s injury might lack poetry (“That’s life.”), but whatever he’s telling his players in the locker room is working.

A West Coast swing, like the one Memphis continues Tuesday night in Portland, is usually a big test for any team. But somehow I get the feeling the Grizzlies will come out of it fine. They are, after all, pretty good at being tested.

Quote of the Day: Glen Davis

On seeing his tribute video played at the Garden last night: “I looked really fat.“