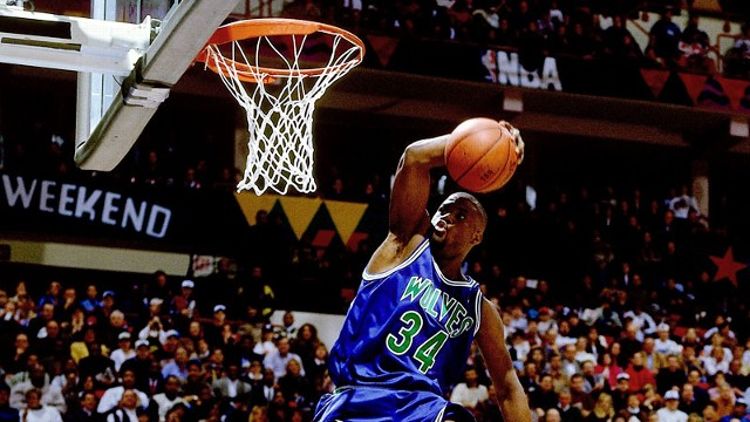 There’s no greater celebration of what professional basketball has become than All-Star Weekend. There will be some fierce dunks, canny dribbling, and face-melting passes, sure, but I’m mostly talking about the spectacle, the off-court everything else, all the new sneaker prototypes and fiber technologies that will be debuted, the trumped-up drama-turned-actual-drama of the 3-point contest, all those wondrous images of awestruck celebrities and athletes cradling each other on the sidelines during a Historic Dunk Performance. It’s like the Super Bowl, only nothing actually matters. No other league has come close to mining this sweet spot between sports and entertainment quite like the modern NBA, such that a pregame concert featuring Ke$ha or a prime-time competition featuring stars showing off “fundamentals” doesn’t seem all that strange. It didn’t have to be this way. Here are just some of the pivotal and slightly prophetic moments of All-Star Weekend history that we found on YouTube:


One of the most important aspects of the modern NBA was born in the stands of a baseball game in July 1983. Rick Welts, one of the NBA’s fledgling marketing advisers, was watching the Cracker Jacks Old-Timers Game and pondering his new responsibilities planning the NBA’s All-Star game festivities. He had met with then-commissioner Larry O’Brien and raised the possibility of adding an extra day of events. “I wouldn’t say it got a ringing endorsement,” Welts recalled. “Larry said that, number one, it couldn’t cost the league a nickel.” Watching these Jurassic ballers jog around the diamond, Welts had two epiphanies: (1.) fans enjoy novel exhibitions, even when they involve the old and nearly infirm; (2.) corporations like to sponsor things. “We didn’t really have any events to sponsor,” he recalls, so he sold the idea of the 1984 Legends Classic to Schick (which decided to leave baseball and football sponsorships to rival Gillette and invest in basketball exclusively). That year’s All-Star game was in Denver, and Nuggets owner Carl Scheer wanted to reprise the halftime slam-dunk contest that had made the 1976 ABA All-Star Game so memorable. It’s strange to think that the dunk contest was initially conceived as a play for nostalgia rather than a showcase for visionary youth. Welts convinced Gatorade to sponsor it. He moved the contest to Saturday, and the concept of the weekend-long All-Star festival was born, with the official “All Star Weekend” designation introduced in 1987.

“It really hits you just before you have to walk out for introductions,” former All-Star player and coach Billy Cunningham explained to Dick Stockton just before tip-off in 1988. “You get a tingling sensation all over your body.” That year’s game was in Chicago, and Tommy Edwards introduced the players with modest aplomb, adding a few choice details about a given player’s skill set (“strong and quick Xavier McDaniel!”), arching his delivery a little when announcing local boys “Glenn Rivers,” Mark Aguirre, and Isiah Thomas. But times were changing. By the late 1980s, the introduction of All-Star Weekend already ranked among commissioner — and, per a fawning 1990 Ad Week cover story, “marketing genius” — David Stern’s synergistic successes. You’ve no doubt seen and heard the wherein Kool Keith and Ced-Gee found something positive to say about every single player, coach, even the trainers. (Crucial bonus beat: this parade of amazing fonts CBS used to highlight the All-Stars’ unusual names and nicknames.)

Maybe the best prototype for today’s extravaganza were the 1990 All-Star introductions in Miami, such a to-do that they were aired live the day before the game. It’s not the horror show of shoulder-pad suits you would think, but the set design remains mesmerizing: neon stars illuminating Miami Arena, an enormous sneaker on one side of the court, and the best players in the world carefully moseying down its lace, as highlight clips remind us that Chris Mullin, in fact, once dunked a basketball. The “Rhythm Nation” dub cross-fades into “It Takes Two” as Clyde Drexler steps out, and in retrospect, this prime-time nod to hip-hop feels prophetic. By then, Magic and Bird were in their 30s. The league was getting younger, flashier, more personality-driven. In the years to come, weird things came of the NBA’s attempts to figure out what to do with hip-hop: 1993’s NBA Jam Session, Redman’s “Time 4 Sum Aksion”-as-entrance-anthem (Also: THIS), the very concept of Isaiah Rider and, years later, Stern’s helping hand to big-and-tall tailors everywhere.

“Everybody wanted to dunk like Dee and not shoot like me anymore,” Dee Brown recalls Larry Bird half-complaining after the Celtics’ rookie guard won the 1991 Slam Dunk contest. Bird couldn’t have been that mad, since he and Kevin McHale had been Brown’s primary dunk consultants going into the contest.

At the very least, everybody wanted shoes with “things in there, I don’t know what they’re called … air bags?” Lining up for one of his attempts against the heavily favored Shawn Kemp, Brown bent over and started pumping up his Omni Lites. The eyes-closed dunk was smart, but Brown mostly won on showmanship. It was the first time a sneaker had become synonymous with a middling player, and suddenly everyone had a signature shoe. It also inaugurated an era of dunk contest product placement — JaVale McGee’s shoes, Blake Griffin’s Kia, as though Rick Welts’s visions of all-underwritten-everything had trickled down to the majority of players themselves. At the time, Brown’s spontaneous pumping elevated Reebok’s status overnight, so much so that Michael Jordan allegedly told him afterward, “Hey you did a great job…but, shoe-wise, I have to go at you now.” (SHOTS FIRED!) Nike fumbled a response, releasing their bulky, absurdly user-unfriendly version of pump technology, which required an actual pump. Somehow, it made sense that David Robinson got assigned that one. There were a couple of weeks when kids at school gutted the inflatable sac from their Reeboks and slid them into their Nikes, between the laces and the tongue. (There was no Internet. We had a lot of time on our hands.)

It’s unlikely most young NBA fans watching the 1993 Legends game knew who the long-retired Zelmo Beaty or Wali Jones were. After all, the age of teal, day-glo kicks, and glossy trading cards was upon us. Courting the youth market, the 1994 All-Star Weekend replaced the old-timers classic with the inaugural rookie game, with proceeds, fittingly enough, going to a fund for retired players. It’s interesting to watch the rookies — split into the Sensations and the Phenoms — work out their swagger. Jamal Mashburn strikes a Thinker pose, and Penny already knows that the best players lick their lips when the cameras are on. Bryon Russell looks confused when the P.A. announcer highlights his defense, and you can already tell that Sam Cassell will spend his career talking reckless. As Shawn Bradley is announced, the P.A. guy adds that he can dunk a basketball without leaving his feet. Bradley grins and whispers to Popeye Jones “I wish!” and you already know it’s over. The introduction of the rookie game was a stroke of genius, especially as the league transitioned toward a different constellation of stars circa 1994. Magic and Bird were distant memories, and who knew if Michael Jordan would ever come back? Could J.R. Rider or Dino Radja or Chris Webber be next in line? Can Bobby Hurley possible recover from that awful accident? Which of these kids would get the last laugh? (P.J. Brown.) About the only shortsightedness on display here was introducing the rookie squads to KLF’s “What Time Is Love?” and an instrumental loop of “Suicide Blonde.”

The children are the future. In the early 1990s, the NBA added a “Stay in School Jam” to its schedule of All-Star Weekend events. Ostensibly a way to recognize local students displaying exemplary “attitude, achievement and attendance,” the events were also a way to unite demographics, or at least capitalize like mad on the overlapping fanbases of Charles Barkley and Blossom’s Mayim Bialik. At the 1995 installment, Queen Latifah and Mary J. Blige eviscerated Suns guard Elliot Perry for his feeble raps before bringing out Brandy and inviting 10,000 screaming tweens to wish her a happy 16th birthday.

Is there any better way to son a potential rival than by pulling down his pants during pregame introductions? Penny looked so focused, too. The NBA is a far chummier place now than in the 1980s and early 1990s, in part because the league’s most influential player ever was an all-smiles sociopath. Related: I had completely forgotten about Mariah Carey’s 2003 tribute to Jordan and NBA jerseys, as well as her appropriation of Cam’ron’s “Oh Boy.”

Because there are still people who worry that international ballot-stuffing will sully the “integrity” of the All-Star game, but mostly because I’ll never grow tired of watching Tracy McGrady and Yao Ming laugh at the same time.