33-Day NBA Warning: In One Press Conference, the Riggin' for Wiggins Race Is a Wrap 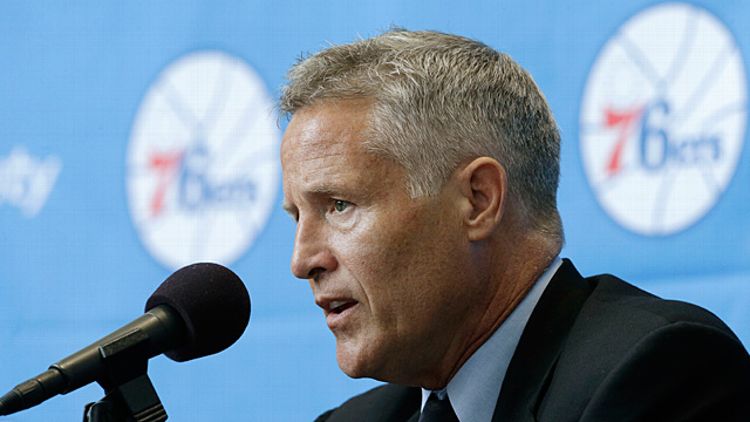 What does it say about an NBA team if one of the stated goals, from the mouth of the new head coach, is to be in shape? You’re not trying to install a Thibodeau defense, or teach the Triangle. You just want the NBA players you pay to play basketball to be in decent physical condition. Think about that. You thought your team was Riggin’ for Wiggins? Think again. Maybe you should just try being Stupid for Smart, because Brett Brown rolled into his first major press conference driving a tank.

Little bit of background for those of you who haven’t been keeping up with the Sixers’ wildly entertaining and daring offseason. After a disappointing 2012-13 season, the franchise hired Houston brainiac Sam Hinkie to run the team, parted ways with Doug Collins, and then pulled off one of the most action-packed draft nights in recent history, dealing Jrue Holiday and selecting injured big man Nerlens Noel and Syracuse point guard Michael Carter-Williams. They finally settled on Spurs assistant Brett Brown to become their new head coach. He has a rep for player development, which I take to mean he knows how to lose gracefully.

We know a lot of teams are going to be tanking this season. But after Brown’s press conference yesterday, it’s hard to imagine any team tanking as gloriously as the Sixers. He never came out and said, “We’re going to be an apocalyptic fever dream of terrible basketball.” But he might as well have. Here are some of the highlights:

• “As a professional athlete, it’s your responsibility to get in great shape.” UH. NO SHIT. “Your skin-fold test (measuring body fat) is this and your weight is this. That’s non-negotiable.” Kwame Brown is on the Sixers, by the way.

• Local hero Khalif Wyatt is “tantalizing” and has the potential to be the Sixers’ Gary Neal (OK?), but has “got to get in great shape. I’m convinced his key is fitness.”

• On the god Evan Turner: “I think the weight of the city and expectation [as a no. 2 overall pick] at times can drown you. I hope he’s not caring what goes on on Twitter.”

Today has already started off badly

• When speaking about Turner, Spencer “Team’s Best Outside Shooter/Only Healthy Big Man” Hawes, and Thad Young, Brown made the following statement, which incidentally can be chiseled into my tombstone right now: I treat them like Timmy [Duncan], Tony [Parker], and Manu [Ginobili] … I have empowered them.”

Andrew Wiggins better start pricing Society Hill condos, because the Sixers just took a huge lead in securing his services. This is going to be really fun, in the sense that it is definitely going to kill me. I just hope my sacrifice is worth it.