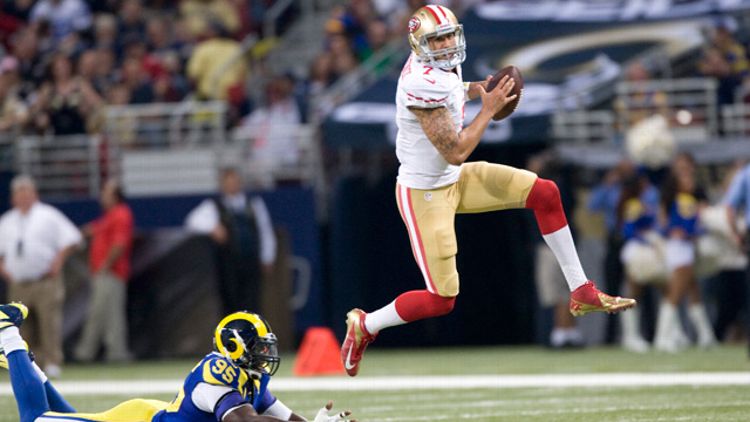 Folks, I searched far and wide for the perfect quote to introduce this week’s preview, in hopes you would find it insightful, inspirational, and phenomenal. There was room for improvement in my quote-selection game after three weeks, certainly, and I feel as if this week marks the beginning of a new chapter, my comeback season, so to speak. Without further ado, here it is:

“How much time is this [gentleman] spendin’ on the intro?”

This thoughtful question comes to us from Drake’s new song, “Tuscan Leather,” and is commenting on the general pointlessness of intros, particularly the ones that precede blog posts about fantasy sports. Why waste time on an intro when you can simply skip to the matter at hand — in our case, 15 insanely compelling football games? To that end, I’ll just stop here (you can thank me later for doing so), and let you begin reading. Until next time, take care.

All the negative tweets in the world couldn’t trigger a positive performance from Colin Kaepernick in St. Louis. The Rams had the 49ers’ number last year, and they’ll definitely be up to the task Thursday, after being thoroughly annihilated by the Cowboys this past weekend. Daryl Richardson is expected to play in spite of a foot injury, making him a slightly better option than Isaiah Pead, who rewarded PPR owners with 13 points last week because Sam Bradford is a checkdown god. Of course, your season is practically over if you’re already depending on either Richardson or Pead, and Eric Dickerson’s wisdom is unlikely to change that.

Let’s talk about Sweet Pea. More specifically, let’s talk about Ray Lewis’s assertion that proper team leadership could’ve prevented Sweet Pea from smashing a bottle into Jacoby Jones’s skull while aboard Bryant McKinnie’s party bus. If you’re on the Ravens, doesn’t this kind of piss you off? Doesn’t it bother you that Lewis has gone out of his way to question the team’s leadership twice this month? Despite being a liability throughout last year’s playoffs and attracting unwanted deer antler spray–related headlines, he had the audacity to call you guys out? What’s the thinking here? That Sweet Pea would’ve been nicer to Jones’s cranium if, say, Joe Flacco delivered a rousing pregame speech to his teammates each week? That’s absurd. It’s so absurd that I’m beginning to think Lewis’s comments were just a calculated ploy to light a fire under his former team. And if Ray-Ray’s motivational tactics helped get Michael Phelps six medals in London, igniting the Ravens’ offense will be a piece of cake. Accordingly, Ray Rice will return to action and gain 100-plus yards on a Bills defense that hemorrhaged 149 to Bilal Powell last week, and Torrey Smith will finally hit pay dirt. It’s more or less inevitable, all because of a woman named Sweet Pea.

HOYER THE DESTROYER is starting. Be grateful for this, Josh Gordon and Jordan Cameron owners. I’m actually more intrigued by the Cincy offense vs. Cleveland defense matchup. For one, it’ll be interesting to see if Giovani Bernard finally amasses more carries than BenJarvus Green-Ellis, although both should struggle against the Browns’ terrific run defense. Then there’s the the A.J. Green–Joe Haden duel, a rivalry that dates back to the World’s Largest Outdoor Cocktail Party and is perhaps the NFL’s finest wide receiver–cornerback battle. I’m betting on Haden to win, if only because Green bested him last time and nature has a way of balancing itself out.

Look, I get why a team might use an alternate running back in short-yardage situations, but that’s no excuse for employing a terrible one. Case in point: Michael Bush. In the first quarter of Sunday night’s game against the Steelers, a 55-yard Matt Forte run took the Bears to Pittsburgh’s 5-yard line. After an ensuing pass interference penalty, the Bears had first-and-goal at Pittsburgh’s 1, a.k.a. prime Michael Bush territory. Two Bush dives up the middle went for no gain, and the Bears were ultimately faced with fourth-and-goal. While Bush miraculously managed to score this time, his reputation as a short-yardage specialist took another major hit in the third quarter when he was brought in to convert a third-and-1 and was predictably stuffed at the line of scrimmage. One has to wonder whether these carries wouldn’t be better allocated to Forte, and I swear I’m not just saying that because I projected Forte to be Week 3’s highest-scoring running back. If Trestman is as smart as some folks seem to think he is, he’ll seriously reevaluate Bush’s role on the team and start playing Forte at the goal line. Such a decision would be right, just, and a positive development for all parties involved, especially fantasy owners.

The Giants’ passing game is in deep, deep despair, and we’re not even a quarter of the way into the season. Eli Manning leads the league with a grisly eight picks, Victor Cruz hasn’t danced since Week 1, and Hakeem Nicks’s game in Carolina was straight embarrassing. (A representative quote from Nicks following the 38-0 beatdown: “I can’t throw it to myself.” Trenchant!) As for the running game … well, yeah. Based on recent history, this probably means the Giants will end up winning the Super Bowl, but still: I’ve devised an offense for Tom Coughlin to use in Kansas City, and it’s virtually unstoppable.

First, watch this NFL Films feature on Eric Berry’s equinophobia, a crippling fear of horses. “Everybody is born with a choice,” Berry intones. “And I’m making the choice not to deal with the horse.” Well, in my offense, Berry will have to deal with the horse — several horses, actually. It’s called the STEED-OPTION, and it involves replacing Eli’s underperforming backs and receivers with a quintet of hyper-athletic stallions. The ball carrier will simply charge directly at Berry until his equinophobia sets in, exploiting a massive weakness in the Chiefs’ secondary that’ll surely result in hundreds, if not thousands, of touchdowns. Even @Horse_ebooks endorses the STEED-OPTION:

This is a very special technique that I have never seen

What are you doing to ring in the Mike Glennon era? Me, I’m just gonna squint for three whole hours, because I have no interest in subjecting my eyes to the turnover-fest bound to take place. Glennon tallied 17 interceptions at North Carolina State last year — impressive stuff, sure, but mincemeat compared to the 20-plus picks Carson Palmer is on pace for this season. You’d be better off starting an opposing defensive back than any Cardinals or Bucs receiver here, and I’m only half-kidding; Tyrann Mathieu is literally champing at the bit to face Glennon. Although Larry Fitzgerald’s pesky hamstring injury is a thing of the past, he’s merely a low-end WR2/high-end WR3 on Revis Island. Likewise, start Mike Williams at your own risk. There won’t be many targets to go around (Doug Martin should get an extra-heavy workload considering that it’s Glennon’s first start), and most of them will go to Vincent Jackson.

Ahmad Bradshaw and Trent Richardson will maintain their 50-50 split in Jacksonville, and both should have productive games against Football Outsiders’ 26th-ranked run defense. Additionally, if Bradshaw outperforms T-Rich again (or, at the very least, matches him in production), I don’t see any reason why this wouldn’t continue to be a time-share going forward. The Chad Henne–Cecil Shorts connection was a legitimate thing (stop laughing!), so it’s a real shame that Blaine Gabbert is returning to the starting lineup. One day you’ll tell your grandkids about the time Henne was unjustly relegated to second string, and everyone’s eyes will well up with big, salty tears.

Opponents have a better chance to be sacked, intercepted or fumble (28.6%) than to convert a 1st down (21.4%) when passing vs SEA on 3rd dwn

Matt Schaub’s already-modest yards per attempt (6.5) figures to decrease on Sunday, because it’s basically impossible to pass deep on the Seahawks. Prepare for below-average performances from Andre Johnson (who’ll be a game-time decision because of a shin injury) and DeAndre Hopkins, and high-volume workloads for Arian Foster and Ben Tate. It seems that only the Henne-led Jaguars are capable of scoring double-digits on this defense. [Cries self to sleep.]

Arguments are an unfortunate but necessary part of life, except if you’re Todd Haley. Then arguments are your entire life, which isn’t to say they’re any less necessary or constructive than the average man’s arguments. To wit: Haley’s “combative, in-your-face style” led to a sideline confrontation with Antonio Brown during the Steelers’ Week 2 loss to the Bengals. Brown reportedly “angrily complained to the coach that not enough pass plays were called for him.” Though the two were “still seething” on Tuesday, they apparently settled their issues by Sunday, because Brown caught nine balls for 196 yards and two touchdowns against the Bears. His 31 fantasy points were by far the most of any receiver in Week 3, so it appears Brown’s complaints were well-founded; as such, expect more and more targets come his way.

1. Start Chris Johnson, although he might be a bit sluggish after Sunday night’s birthday banger.

If you’re scrambling to find a stand-in for Aaron Rodgers or Cam Newton, boy have I got a solution for you. Terrelle Pryor remains available in 74.7 percent of ESPN.com leagues and should go bonkers on Washington’s abysmal defense, as all signs point to him starting. In fact, I wouldn’t be totally shocked if TPeezy outscores that brat RG3, because when has Fred Smoot ever been wrong before?

Basic trigonometry dictates that if Philip Rivers can pass for three touchdowns on a given defense (in this case, the Eagles), Peyton Manning is liable to toss infinite touchdowns against it. Those numbers are exact, which means we’re in store for a bona fide Red River Shootout, folks. Philly’s extra preparation time will pay dividends here, especially since Denver’s on a short week, and the real winner will be you, the fantasy owner. Well, unless you’re starting the relentlessly unreliable Ronnie Hillman after history’s flukiest touchdown run.

There, there, Eddie Royal owners. Don’t cry because it’s over, smile because it happened. Lord knows Miles Austin owners would kill to be in your position. Of course, they’d probably all tear their hamstrings in the process, but still.

Rob Gronkowski reportedly has a “very good chance” to play in Atlanta, so yes, go ahead and cut ties with Zach Sudfeld if you haven’t already. It’s OK. We’ve all made mistakes, some worse than others. I do expect Gronk to struggle, however, considering (a) the rust factor, and (b) that the Falcons held Jimmy Graham to a measly 10 fantasy points in Week 1. Meanwhile, Danny Amendola’s injury is just about the most gruesome thing ever (his “groin was torn off the bone”), and even if he plays, he’s unlikely to contribute in a significant way. As for the Falcons, keep Roddy White on your bench until further notice. Jacquizz Rodgers is a RB2, Jason Snelling is a low-end flex, and .

While I think Mike Wallace will have a horrendous game against the NFL’s third-best pass defense, he’s so volatile that I’m wary of making any definitive pronouncements one way or the other. Ask your Magic 8 Ball about him.

33-Day NBA Warning: In One Press Conference, the Riggin' for Wiggins Race Is a Wrap