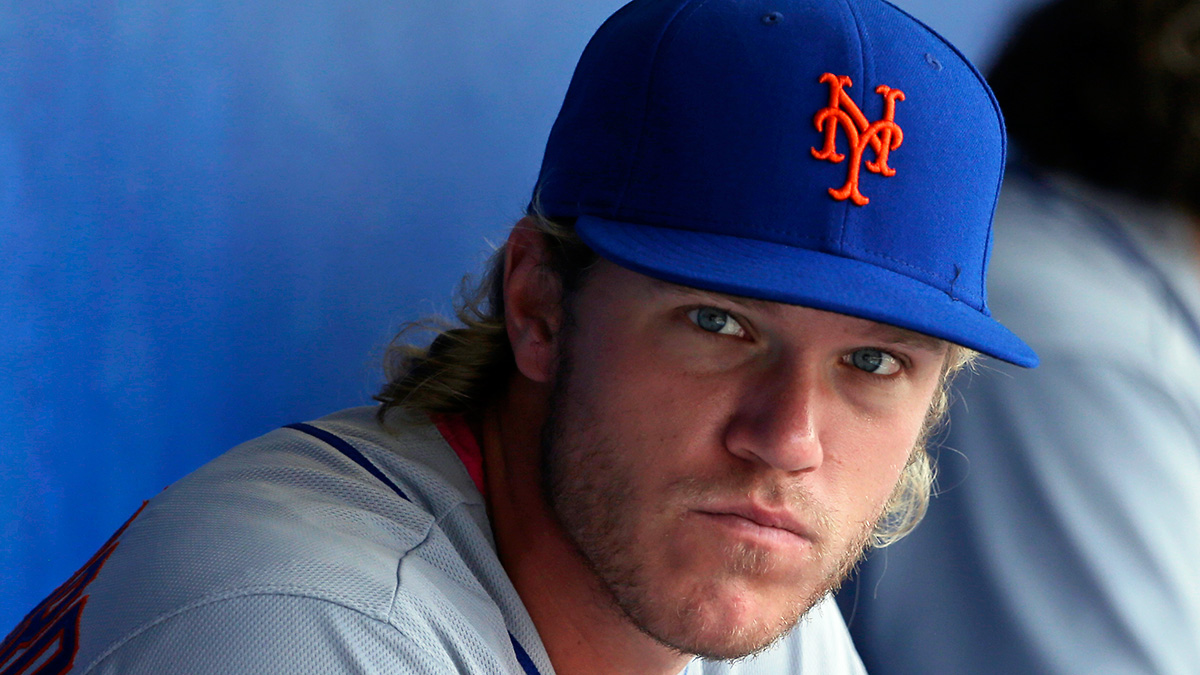 Tonight, a giant man who people call Thor will attempt to save New York from a runaway genetics experiment who operates under the rule of the deposed mastermind of an evil, world-conquering empire and his bespectacled, snake-wielding henchman.

Mets pitching phenom Noah Syndergaard will stand his ground against Cubs hitting phenom Kris Bryant on a cool, breezy evening at Wrigley Field, one of America’s great landmarks, with the power of Syndergaard’s arm brought to bear against the power of Bryant’s bat (or sword, if we’re keeping the metaphor going). Syndergaard, with his effortless but prodigious strength, will battle Bryant, with his smile handsome but menacing, like the bad guy in a teen romantic comedy, and his eyes glowing blue as if he were chosen by the Prophets to battle the Kosst Amojan.

Mankind is on a slow but inexorable path toward all popular culture being part of the Marvel Universe.1 What was once the province of comic books and movie theaters has come for network TV, in the form of Agents of S.H.I.E.L.D., Agent Carter, Everwood,2 and more. And now, baseball features Thor battling other superheroes.

At this point, we know Bryant well — the inconceivable raw power, the psychic plate discipline, the fact that the amount of swing-and-miss in his offensive game makes him resemble Adam Dunn as well as a deity of the trade winds. And the bat’s not all: Bryant is a good all-around athlete with a plus arm and plenty of baseball savvy. This is the same process of discovery and praising-with-faint-damnation that we went through in discovering the full extent of The Mighty Giancarlo Stanton’s greatness, but while it took years with Stanton, it took only a few weeks with Bryant.

Whenever a new life-form evolves, however, nature will eventually bring around a new kind of predator to hunt it. Syndergaard might not be a perfect analogue for Bryant’s quality, but he’s a similar kind of player. At 6-foot-6, 240 pounds, he looks like what we’d get if Boeing made human beings. Like Bryant, Syndergaard took a huge leap forward in his draft year, and the Blue Jays took him 38th overall when he was just 17 years old.3 Unlike Bryant, who stepped into the professional game nearly fully formed and destined for stardom from the start, Syndergaard needed some time to develop. He never put up the kind of gaudy minor league numbers that Bryant did because, among other reasons, he pitched the past season and change at Triple-A Las Vegas, a place where the air is so hot and thin it’s like playing baseball on Mercury.

But over the course of six minor league seasons, Syndergaard grew larger and more imposing, like a pile of unfolded laundry. In his current form, Syndergaard can throw a 93-to-97 mph fastball well into the later innings, and because velocity for velocity’s sake isn’t enough in the big leagues, he can also drop a solid changeup and a menacing curveball on anyone who’s sitting too intently on the heater. He’s the size of an SUV, with a Scandinavian last name and this kind of hammer to wield; you can see why they call him “Thor.”

That Syndergaard has arrived in the major leagues at the age of 22 is the latest testament to the Mets’ ability to scout, draft, and develop power arms in recent years. The franchise has been completely unable to get out of its own way in plenty of other areas, but at this moment, the Mets have more pitchers than they can use. In the past few years, they’ve fleeced the Blue Jays for Syndergaard and the Giants for Zack Wheeler, and they’ve gotten Matt Harvey and Jacob deGrom to outperform their draft profiles by tremendous amounts. Next year, those four pitchers could form a playoff rotation; this year and last, they gave the Mets enviable depth that meant that when Harvey got hurt, they could bring up deGrom, and when Wheeler got hurt, they could go back to Dillon Gee, and when Gee got hurt, they could finally bring up Syndergaard. Nowadays, no team makes it through a season with only five starting pitchers, so building up that kind of potential and quality is not only necessary, but extremely difficult.

If the Mets are going to ride their incredible April wave all the way to the postseason, though, that’s exactly what they’re going to need to keep doing. Because while the single combat metaphor was convenient for this superhero battle gag, Syndergaard will have to contend with more than just Bryant on Tuesday night and beyond. He’ll have to face Anthony Rizzo, and Jorge Soler, and lots of other potent bats on lots of other teams. The only thing that can defeat a superhero is another superhero.