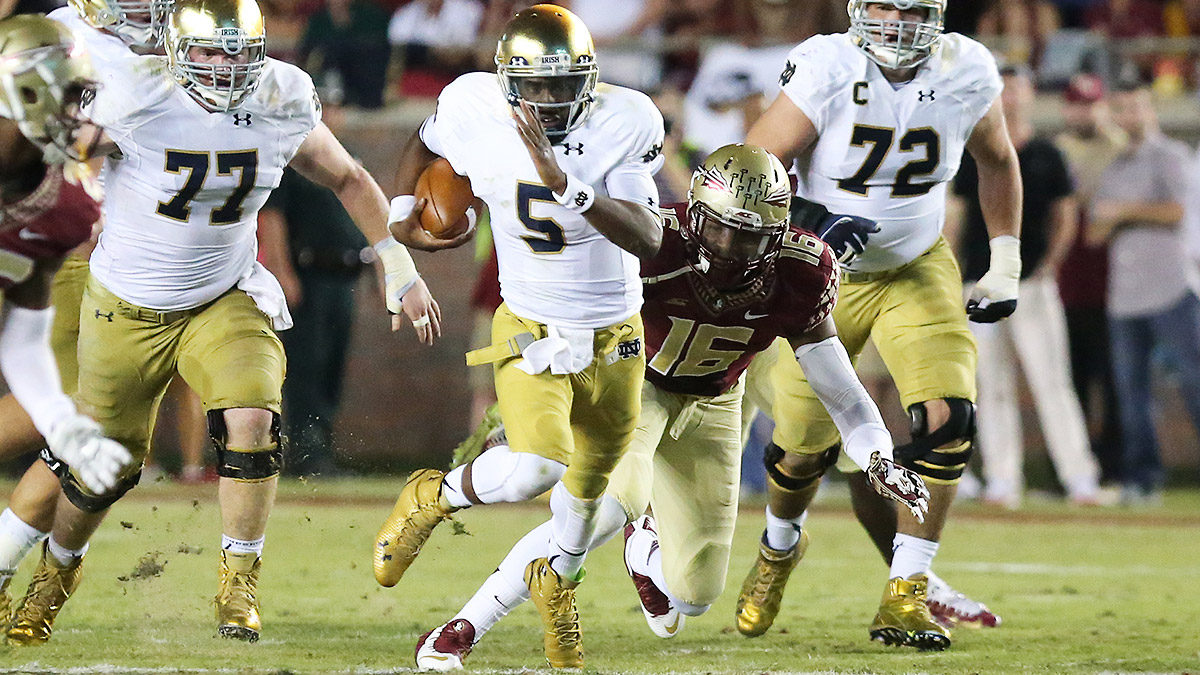 When news broke on Thursday that quarterback Everett Golson plans to transfer from Notre Dame to spend his final season of college eligibility elsewhere, the first order of business was trying to deduce his new destination. Absent any hints from Golson himself, who referenced the future in his official statement only to confirm that he’ll be graduating from Notre Dame with a bachelor’s degree later this month, most of the initial buzz has centered on Texas, a prospective marriage that lends itself both to opportunism, with Texas desperate for an upgrade behind center, and to drama, with the Longhorns set to open the 2015 season at Notre Dame on September 5. For some idea of how enthusiastically UT would welcome a proven quarterback between now and then, note that in a lawsuit deposition earlier this year, head coach Charlie Strong couldn’t even remember the name of his incumbent starter from 2014.

As intriguing as it is to imagine the prodigal Irish star sauntering onto his old home turf in opposing colors, though, Golson’s is the rare transfer case in which the where is not nearly as interesting as the how. Given this ending, it’s fair to say now that the trajectory of Golson’s career in South Bend defied precedent. As a redshirt freshman in 2012, he was at the controls for an undefeated regular-season run to the national championship game, a campaign that saw Notre Dame reach no. 1 in the AP poll for the first time in two decades. As recently as six months ago, he was regarded as a viable Heisman candidate just a few weeks before the 2014 trophy was scheduled to be awarded, and managed 37 total touchdowns last year (29 passing, eight rushing). Altogether, he boasts an 18-5 record as a starter, giving him more career wins going into the upcoming season than all but six other active FBS quarterbacks.1

Based on those credentials alone, Golson is arguably the most decorated quarterback to hit the pseudo free-agent transfer market in recent memory, the rough college equivalent of a franchise NFL QB opting to skip out on, or being denied, a contract extension. That never happens. How does that happen?

The short answer, as with most transfers, comes down to playing time: Although coach Brian Kelly refrained from declaring a front-runner in the spring competition between Golson and redshirt sophomore Malik Zaire,2 the fact that Zaire held his own in the spring after taking a majority of the snaps in last December’s Music City Bowl upset over LSU certainly seemed to bode poorly for the veteran. It’s also possible that coaches were more up-front privately with Golson about the passing of the torch than they were publicly with reporters.

The longer answer is that, even in the best of times, few quarterbacks have insisted on traversing the yin and yang of a college career quite as thoroughly as Golson. Initially, his success was tempered by the impression that he’d stumbled into the perfect situation at the perfect moment; at times, his production seemed largely ancillary to the team’s fate during the 2012 BCS run, when he accounted for just 18 touchdowns in 12 games and was buoyed by the nation’s no. 1 regular-season scoring defense. During one stretch that year, the Irish held opposing offenses out of the end zone in 17 consecutive quarters, while the offense went on to average fewer points per game (26.0) than Notre Dame has scored in any other season since 2008. Golson’s encore campaign in 2013 was deep-sixed by a cheating scandal (or something like that) that cost him the entire season. Last year’s apparent resurgence ended in misery after his newfound predilection for turnovers overtook his Heisman bid and set it ablaze in the course of a four-game November skid.

For his part, Zaire was hardly a revelation in the bowl game, where he averaged a modest 6.4 yards per pass in his first career start. But he didn’t commit a turnover and he added a team-best 96 yards rushing, easily surpassing Golson’s career high on the ground. Plus, considering the competition, the offense as a whole delivered its most complete performance of the year. Even if promoting Zaire to the top of the depth chart full time is a gamble, at this point it’s hard to argue it’s not also the safer bet.

Still, as prospective recruits go, a guy with Golson’s track record remains a prize catch. Despite the initial speculation about Texas, the odds that he’ll wind up as a Longhorn are, well, long: Under NCAA rules, Notre Dame retains the right to block his transfer to specific schools, and is unlikely to sign off on a move that would put Golson on the opposing sideline in the season opener. Golson is also unlikely to land anywhere in the SEC, which requires a special waiver for graduate transfers who have a history of academic and/or disciplinary issues at their previous school, as Golson does; so much for murmurs about upstaging the aspiring starters at Alabama, LSU, or South Carolina, Golson’s home state. Of the potential destinations that have surfaced so far, the best fit would seem to be Florida State, which appears to be unencumbered by bureaucratic obstacles or an heir apparent to Jameis Winston.

Wherever Golson goes, with only one year left to make good on his tantalizing potential, he’ll step immediately into the starting role with more fanfare than any fifth-year defector since Russell Wilson took his talents to Wisconsin. The cost: one scholarship. Let the buyer beware.

‘The Grantland NFL Podcast’: Breaking Down the Draft Picks in the AFC

Heat Check: Taking the Temperature of the NBA Playoffs