Heisman Watch: When a Loss Is a Win 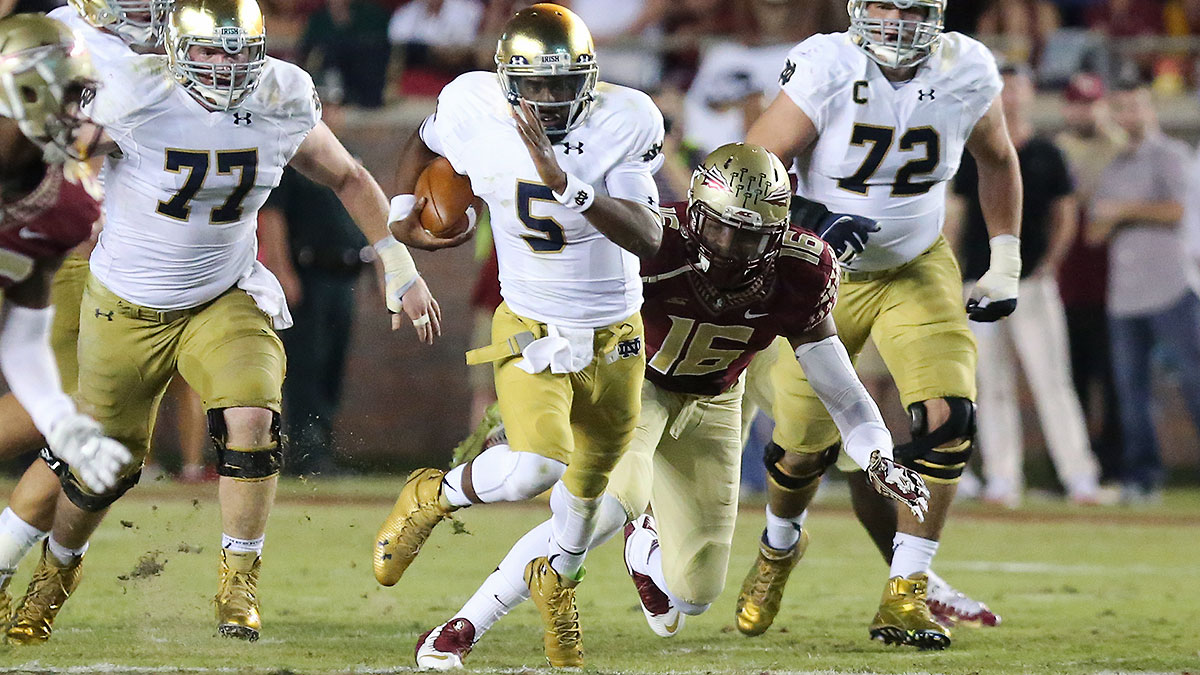 If it’s possible for a player to improve his Heisman stock in a loss, Golson did exactly that in Notre Dame’s 31-27 defeat to Florida State. His raw numbers were decent enough — 31-for-52 passing for 313 yards, three touchdowns, and only two turnovers — but more important were the two indelible moments he provided on Notre Dame’s final drive. First was his unreal completion to Corey Robinson on fourth-and-18, which put the Irish in Florida State territory with 1:19 to play:

Second was another fourth-down conversion, this time from the Seminoles’ 2-yard line. It was a game-winning touchdown pass to — who else? — Robinson, the literal son of David, and it was glorious. Wait, check that; it would have been glorious, had Irish receiver William Fuller not negated the winning score with an offensive pass interference penalty (which was obviously the product of a referee-led conspiracy against Notre Dame football):

While the Irish ended up losing, the game was largely a win for Golson’s Heisman campaign. A victory would have been nice, but a near road upset of the undefeated reigning national champs may be almost as good in the long run. However, Golson’s margin for error is now razor-thin, and he’ll face additional challenges in Arizona State, Louisville, and USC.

If Golson’s stock improved despite the loss, Winston’s must have experienced an even greater bump, right? Well, not quite. While Winston is probably still college football’s best player, two major factors are working against him. The first, as we’ve repeated ad nauseam, is that it’s exceedingly difficult to win the Heisman twice. The second is that Florida State has suddenly become the most uniquely unlikable sports team since the 2010-11 Miami Heatles, with Winston the archvillain. He faced allegations of raping a fellow student. He participated in a BB gun battle that resulted in 13 broken windows at a Tallahassee apartment complex. He committed multiple thefts. And he got suspended for the Seminoles’ game against Clemson earlier this season after shouting an offensive phrase in Florida State’s student union. Suffice it to say, his few defenders tend to dress like this: 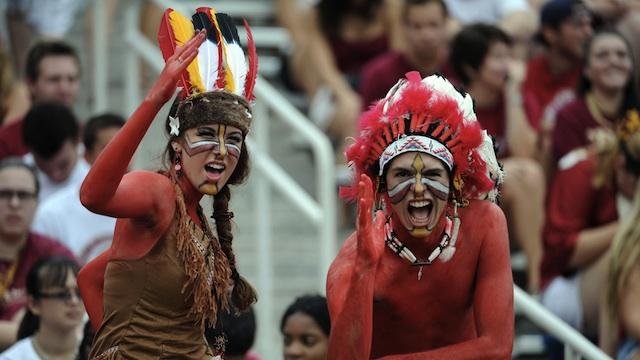 That laundry list of off-field offenses and allegations from the last couple of years is relevant because the Heisman race is like an elementary school election: It’s just as much a popularity contest as a measure of on-field performance, and Winston is nowhere near popular enough to win the social vote this season. Hell, even his coach recognizes this:

Last week, USC coach Steve Sarkisian declared that his Trojans were “a Hail Mary away from being probably a top-five team in the country,” which, aside from being completely untrue, was an admirably sanguine way of assessing a 4-2 squad. Similarly, Kessler is only a Hail Mary away from being a legitimate Heisman contender — which is to say, his campaign would totally be rolling if he had been able to muster a last-second touchdown bomb against Boston College on September 13. Alas, that didn’t happen. On the bright side, he didn’t need a Hail Mary against Colorado’s weak-ass defense last weekend, since he threw a school-record seven touchdowns in that contest, earning a moderate amount of respect.

After posting an appallingly pedestrian stat line in Morgantown — 16-of-36 for 223 yards and two touchdowns — Petty is all but out of the Heisman race, as his entire campaign hinged on his ability to accumulate spectacularly gaudy numbers on a weekly basis. The fact that Baylor also lost is almost an afterthought.

All of Grantland’s Heisman Trophy goodness
Just as Ohio State is tiptoeing back into the playoff picture, Barrett is staging a sneaky, grassroots Heisman campaign. Here I am legally obligated to point out that he’s feasting largely on the dregs of the Big Ten, but hey, it’s not his fault that Kyle Flood can’t attract elite defensive recruits to Rutgers. Weak opponents notwithstanding, Barrett has made impressive strides since losing to Virginia Tech in Week 2, so much so that some of the locals are starting to wonder whether he’ll start over Braxton Miller next year.1 Considering how well the freshman is playing, it’s not a ridiculous question to ask. Let’s wait and see what he does in East Lansing on November 8 before getting too excited about his Heisman prospects, though.

White is the latest victim of the Heisman’s dumb, unwritten rules, which except in very rare cases preclude wideouts from winning the award despite the passing game’s growing predominance. He joins Alabama’s Amari Cooper, Arizona State’s Jaelen Strong, and Florida State’s Rashad Greene as a Grantland-approved UROTW, and will receive a complimentary care package in the mail. In the meantime, expect him to continue to lead all receivers in yards per game (145.7 and counting!) and to make extraordinary, interfered-with catches look like a piece of cake.

How else to describe Coleman, whose candidacy will never be taken seriously on account of the fact that he plays for Indiana? As with White, the doomed state of this campaign is a damn shame, because Coleman is averaging 8.83 yards per carry and 170.29 yards per game despite playing with a veritable zombie at quarterback. Furthermore, he’s coming off a performance in which he ran roughshod over Michigan State’s defense, which was previously thought to be impossible. (Even the esteemed Ameer Abdullah had a mediocre game against Sparty.) Nevertheless, Coleman is unlikely to receive even a courtesy invite to New York, so you might as well watch this stirring highlight reel as a show of support.