MLB Overnight: Comeuppance and Other Myths After the Cardinals’ Walkoff NLCS Game 2 Win 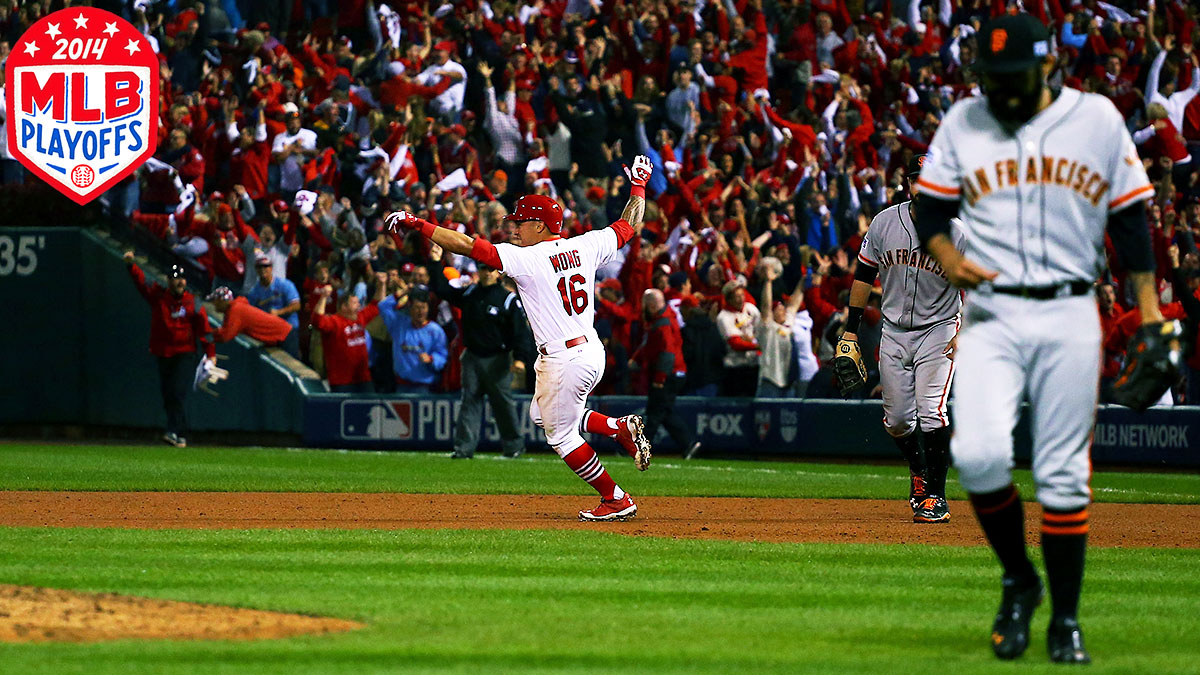 Three thoughts after the Cardinals’ bonkers, 5-4 walkoff win over the Giants to knot the NLCS at one game apiece.

1. The Giants Set Up Hunter Strickland to Fail

Four of the Cardinals’ five runs last night came on solo homers. Stranger things have happened. Matt Carpenter hit the first one, and he’s belting home runs pretty much at will this October, so Jake Peavy shouldn’t feel too bad. Oscar Taveras hit the second, and he’s a particularly talented hitter despite how badly he struggled as a rookie; plus, no matter how well Jean Machi has pitched this year, he ain’t exactly 1996 Mariano Rivera.

It’s the third home run that bugs me.

Hunter Strickland is a great story: At 26, he’s seriously old for a rookie, but he’s big and handsome and throws 98 mph and he leaves his shirt unbuttoned to let his chest hair stick out like he’s auditioning to play Gaston in a stage production of Beauty and the Beast. Still, it’s like the Giants saw all the good press John Holdzkom brought the Pirates when he came up out of nowhere and said, “Yeah, we ought to get us one of those.” Strickland has given up some pretty conspicuous home runs to lefties with power this postseason, by which I mean Bryce Harper hit him like he was trying to explain the Mercury-Redstone program to someone who’d never seen The Right Stuff.

Which leaves unexplained why Strickland, for all his velocity and all his chest hair, was in a position to give up a similar suborbital blast to power lefty Matt Adams, to put the Cardinals up 4-3 in the bottom of the eighth inning of a playoff game.

(That’s three solo homers. We’ll get to the fourth in a bit.)

2. Yadier Molina Got Hurt, But That’s Not Really Why the Cardinals Almost Lost

The Cardinals blew the lead Adams earned them half an inning later, but I don’t think it’s entirely fair to blame backup catcher Tony Cruz, who was in the game after Yadier Molina exited in the sixth with an oblique strain.

People who like Buster Posey and Jonathan Lucroy less than I do say Molina is the best catcher in baseball, but whatever your opinion of Molina, he’s objectively a tremendous defensive catcher, and if he’d caught the full game, he might have corralled the passed ball that eluded Cruz in the seventh or the wild pitch that bested Cruz in the ninth, allowing Matt Duffy to score the tying run all the way from second base.

Without letting Cruz off the hook — if you’re going to post a .580 OPS for your career, you’d damn well better not let anything past you — he shouldn’t have been in that position.

All of our postseason coverage!
When I was a kid, the Phillies had a closer named Heathcliff Slocumb, and he was an adventure. When he was on, he was on, but he pretty routinely came in with the bases empty and a two-run lead and closed out the game with the winning run in scoring position. I remember one game (this one, which I discovered by the miracle of Baseball-Reference.com) in which Slocumb came in with a 5-0 lead, the bases loaded, and two outs in the ninth. He allowed all three inherited runners to score before he recorded the single out he needed to close the game. I vividly remember my dad shouting “You get a save for that?” at the TV in the same tone of scornful incredulity he used when I got bad grades.

That’s what St. Louis closer Trevor Rosenthal has been like: He’ll get the Cardinals the save, but he’ll make them sweat a little first. Last night, Rosenthal allowed two singles, issued two walks, and threw the aforementioned wild pitch in 2/3 of an inning that belied how bad he actually was. Rosenthal struck out Brandon Crawford swinging on what would have been the 5-0 pitch of the at-bat in a world with robot umpires. He then needed Jhonny Peralta to make a full-extension grab of a Gregor Blanco line drive for the second out.

And before being yanked, he let the Giants off the hook for allowing Strickland to face Adams.

3. About That Fourth Homer …

We were all ready to go 18 innings when Sergio Romo came in to face Kolten Wong, the promising but still green Cardinals second baseman. Leading off the bottom of the ninth inning of a tied playoff game, Wong hit an 0-1 pitch into the right field bleachers, and the game was over before everyone had returned from their mid-inning bathroom breaks. If Johnny Cash’s “The Man Comes Around” could play baseball, this is the kind of at-bat it would deliver. And all of a sudden, Rosenthal was off the hook.

Molina’s status for the rest of the series is uncertain. Comeuppance is for suckers. Game 3 is on Tuesday.

Week 6 Wrap-up: Heavy Is the Head