MLB Overnight: More Magic for K.C., More Homers for Baltimore in the ALDS 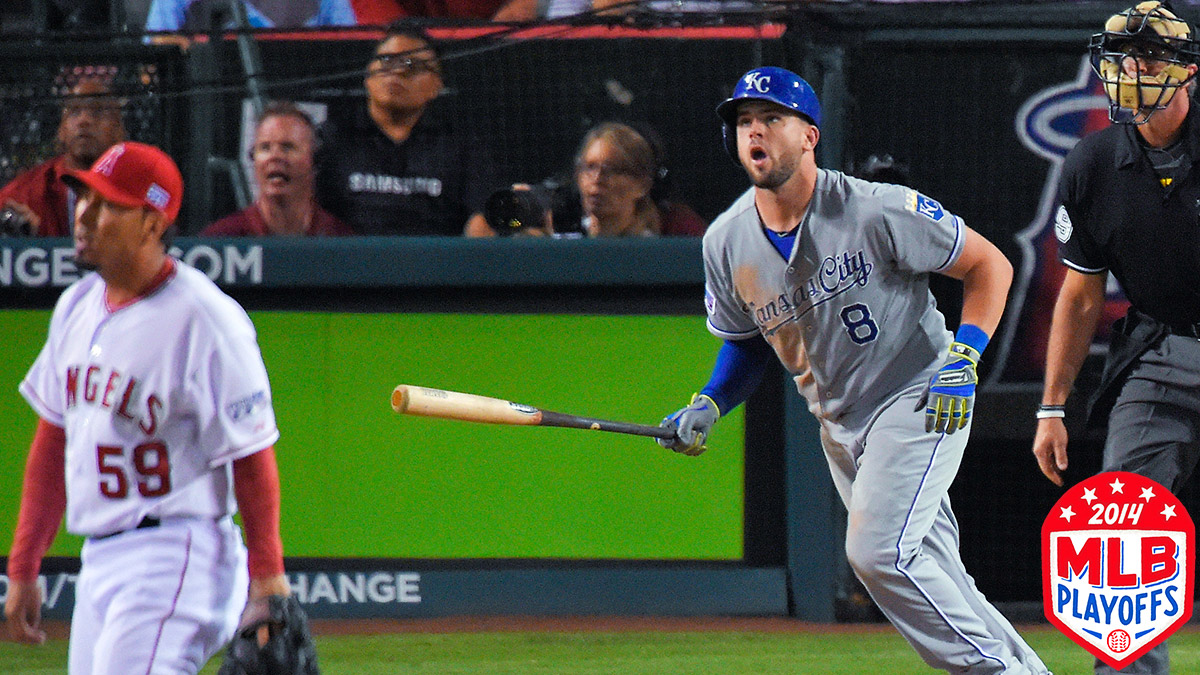 The first night of the 2014 ALDS featured several familiar elements: postseason heroics from Nelson Cruz; a bullpen meltdown from Detroit; some … creative … managing from Ned Yost; and, most memorably, a tense extra-inning win for Kansas City for the second time in as many games.

But you know all of that. Here are two lesser-known but equally important takeaways from each game.

Pitchers Shouldn’t Leave Slop Out Over the Plate

The thing about K.C.’s Jason Vargas and L.A.’s Jered Weaver is that even though they both pitched well in the Royals’ 3-2 extra-inning win, neither throws hard. Vargas’s average fastball this year was 87.3 mph, Weaver’s 86.3. A pitcher can throw breaking balls in the dirt and pitch to contact all he likes, but he can’t do what Weaver did in the third inning: With a runner on first, the Angels’ nominal ace hung a 69 mph curveball to shortstop Alcides Escobar that couldn’t have stayed in the zone any longer if Jim Boeheim were coaching it. The Royals took the lead, 1-0.

Vargas answered in the bottom of the inning. After spinning, bouncing, and dodging his way through the first eight Angel hitters, he grooved an 81 mph changeup — the announcers and the box score tell me it’s a changeup, at least; I have a hard time telling the difference with Vargas — to Chris Iannetta, who hit it out.

Back to Weaver: Alex Gordon’s fifth-inning double and the Omar Infante sac fly that brought Gordon home were both hit the other way off low, relatively hard pitches; in between, Sal Perez came within about a foot of jacking a grooved 85 mph fastball out to left.

Then, Vargas seemed to forget that if you throw 88, you probably shouldn’t leave it middle-in to David Freese, or else he’ll hit a home run that’ll land in about the same spot as the first one you gave up, you big dummy.

After the fifth inning, neither team scored for what seemed like 50 years, but in the 11th, Fernando Salas went right down the middle with an 85 mph changeup that had less English on it than the wine list at a dive bar in Novosibirsk, and Mike Moustakas hit it out for what proved to be the winning run.

Guys, you’re professionals. Don’t leave slop out over the plate.

The Orioles beat the Tigers, 12-3, and though most of that offense came well after Orioles starter Chris Tillman had exited the game, it’s worth noting that he pulled off the upset over Max Scherzer in an interesting fashion. Conventional wisdom tells pitchers to keep the ball down so they can induce more grounders, but Tillman, at least initially, worked mostly above the strike zone.

That approach can succeed when a pitcher is 6-foot-5 and can throw 94; by the end of the first inning, it almost seemed like the strike zone had moved up about a foot. When it works, a hurler can get Miguel Cabrera to swing at a pitch that’s up at his eyes:

The risk, of course, is that if hitters aren’t chasing up, and the pitcher has to try to leave the high fastball at the letters, this can happen:

There’s a third potential outcome, which is a hitter fouling off the high outside fastball until he nearly dies. Last night, Ian Kinsler saw 30 — THIRTY! — pitches in three plate appearances against Tillman, of which he fouled off 16. Going 0-for-2 with a walk might not sound all that interesting, but Tillman vs. Kinsler was the most fascinating extended battle of the postseason thus far.

The Tigers Put the “Bull” in Bullpen

Of course, nobody remembers Tillman vs. Kinsler because of what happened in the eighth inning. Despite running out of a bigger inning, the Tigers had cut the lead to 1 in the top of the eighth, and in the bottom of the inning manager Brad Ausmus went to his bullpen with one out and a man on second.

Baltimore closer Zach Britton had come in when the game was 4-3 for a four-out save, but by the time the devastating bottom of the eighth had wrapped, he’d been sitting for so long, and the lead was so great, that Buck Showalter was all like “yeah, never mind” and brought in Tommy Hunter to get the last three outs.

I’m not big on game-to-game momentum, but going from having a potential game-winning rally in the works to getting blown out in the span of an inning has to be at least a little demoralizing for the Tigers.

Kansas City’s defense, particularly its outfield defense, was a known strength going into the playoffs, and it was on full display Thursday. Lorenzo Cain made two great catches early: one leaping at the wall in the first, and another coming in on a line drive in the second. Not to be outdone, Nori Aoki delivered two game-saving catches of his own.

Look at that smile. I’m not positive Aoki knew exactly what he was doing either time, but all’s well that ends well.

NLDS Preview: Breaking Down Giants vs. Nationals and Cardinals vs. Dodgers

K.J. McDaniels and How the NBA Dumps the Forgotten Lower Class