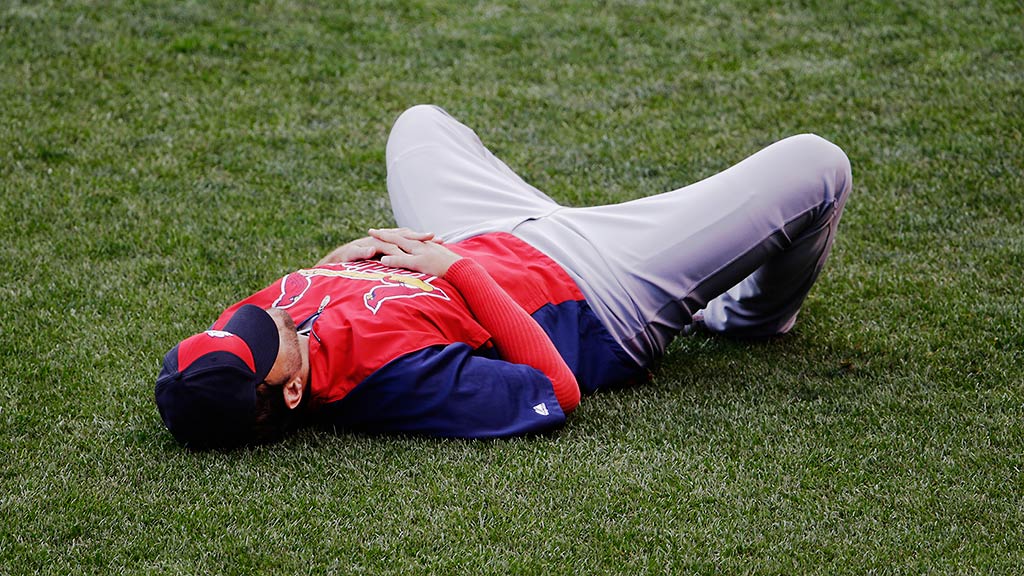 I bet you thought Tuesday night’s MLB All-Star Game produced only one winner and one loser, but you’re wrong. There were many winners, many losers, and everything in between. And while school might be out for the summer, baseball isn’t, so let’s hand out some letter grades.

The player introductions are my favorite part of the All-Star Game, and while they mostly went off without incident last night, the ship nearly ran aground twice.

First of all, did nobody think to tell Madison Bumgarner how to tip his cap? Instead of lifting it off by the brim like most humans would, Bumgarner reached around his head and palmed the damn thing like he was using the claw machine to win a Buzz Lightyear doll. Very disconcerting.

Then there was poor Jeff Samardzija, who was a real pro about his cap tip, but suffered other ills. Joe Buck went all Pierre McGuire on the intro, explaining to the crowd why Samardzija was lined up with the National League players even though he’s now a member of the Oakland Athletics. All the while, poor Samardzija stood up there with his cap off, presumably feeling like an asshole, unsure of what to do while Buck delivered a monologue roughly the length of “Nights in White Satin.”

Some of the special All-Star Game caps looked cool on their own; not many — I hate the trucker-style front panel — but some. A lot of them didn’t, though, because they didn’t pair well with uniforms that were obviously designed for different hats. 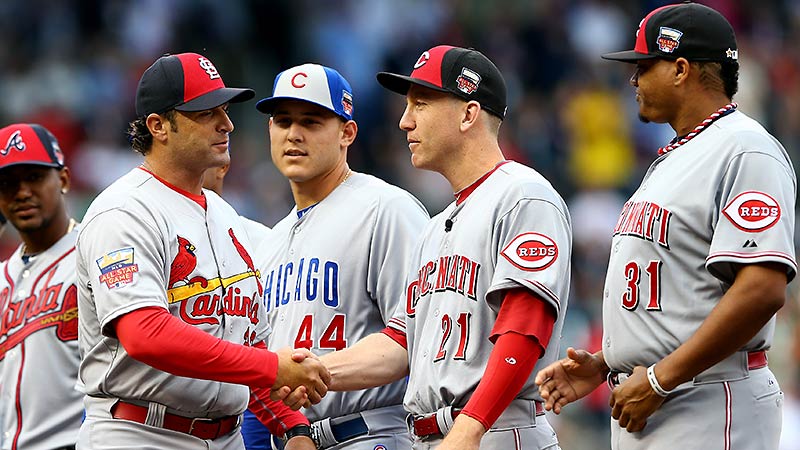 Samardzija’s intro actually wasn’t the most awkward part of the pregame festivities.

Public schoolteachers are the backbone of our society, and are so undervalued they’d be on the 2002 A’s of civil servants, so I’m very pleased that MLB decided to honor them. I’m just not sure why they did a bit of formation marching I’m pretty sure I saw Santa Clara Vanguard use in the DCI finals back in 2007. I’m also not sure why Idina Menzel — who’s fine, by the way; I ain’t got no quarrel with them Idina Menzel — delivered such a strange cover of the 15th-most famous Bob Dylan song while 30 of the nation’s finest schoolteachers stood around on national TV, unsure what to do.

This wasn’t a total failure, though, because Buck pronounced her name right, which is a bigger victory than we’d have thought before the Oscars.

I’m sick of the hagiography, but this was an appropriate send-off for a great and beloved player. Jeter went 2-for-2 — to the opposite field both times, of course — and acknowledged the adulation without preening about it. Good times.

Of course, Jeter’s success gave rise to the night’s worst moment. NL starter Adam Wainwright (probably) purposely grooved a 1-0 fastball to Jeter in the first inning, which Jeter lined to right for a double, and then admitted he’d done so, in front of reporters and with the game still in progress. Once the folks in the Fox booth got a hold of the news, they threw it to Erin Andrews, who was standing by in the dugout with a mortified Wainwright, who was blushing like a high schooler caught ogling the math teacher. Wainwright denied throwing Jeter a meatball, blamed the whole thing nebulously on social media — which I didn’t know people as young as Wainwright could do — and walked off. The announcers harrumphed in relief that they’d so narrowly avoided breaking kayfabe.

As if it matters: Chan Ho Park willingly coughed up a homer to Cal Ripken in the 2001 All-Star Game, Ripken’s last, and nobody cared. The All-Star Game is an exhibition baseball contest, not Benghazi.

McCutchen did it right. First, he winked at the TV camera on his way out of the dugout for the NL’s introductions. Then, as the game’s first hitter, he legged out an infield single to short, barely beating Jeter’s throw and sparking some friendly banter between the pair. Then McCutchen picked on AL catcher Salvador Perez a little, advancing to second on a wild pitch that Perez probably should have handled, and then stealing third base outright. It might not have been great conventional baseball sense to risk a strike-’em-out, throw-’em-out double play at third base with Paul Goldschmidt coming up, but Cutch understood that we’re not in this to watch people stand around. And he did it all while wearing highlighter-yellow spikes.

I can’t give the reigning NL MVP an A, because he went hitless in his last two at-bats, but nobody had more fun and played with more panache.

Apart from the intros, my favorite part of the All-Star Game is that MLB relaxes its Victorian rules on accessories. I loved the various neon sleeves and gloves and bracelets, and Mike Trout’s shoes that actually looked like trout, but Utley’s robin’s-egg blue cleats with pink laces were the class of the bunch. 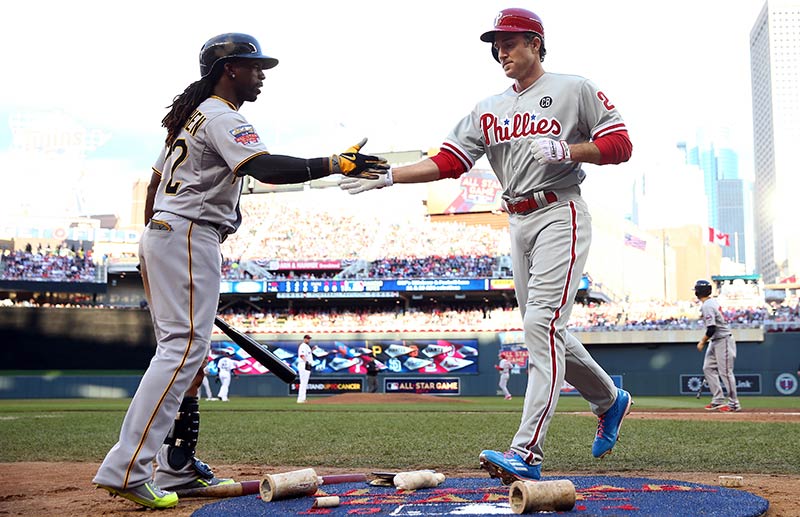 Utley wasn’t too shabby, either. In the second inning, he hit a double to right center that missed going out by about a foot, then got hit by a pitch in the fourth. Jeter might not have been the only Hall of Fame–worthy franchise cornerstone middle infielder who left his last All-Star Game after reaching base in his signature fashion.

The Best Fans in Baseball: D-

Entering the game, Cardinals fans had two gripes: that some people were deeming Mike Matheny’s decision to start Wainwright over Clayton Kershaw somewhat controversial, and that the Brewers had run a parody negative ad suggesting folks vote for Jonathan Lucroy over Yadier Molina.

Well, Wainwright, who’s an outstanding pitcher having a great year, got his ass pretty well handed to him: Three of the first four batters he faced scored. And while Molina missed the game altogether following a thumb injury, Lucroy went 2-for-2 in the game with two doubles and two RBI. Lucroy also put on a defensive master class by adeptly handling some of the hardest fastballs and trickiest breaking stuff in the game. Judging by the trouble Perez had behind the plate, that’s not as easy as it sounds. Ball don’t lie.

Meanwhile, local hero Pat Neshek came in and allowed three hits and two runs in a third of an inning. It wasn’t a great night for St. Louis.

Big night for the late Tony- and Emmy-winning actor Michael Jeter, known for his roles in Waterworld and on Sesame Street before he died at age 50 in 2003.

Last week, I criticized Matheny’s decision to bring Pittsburgh lefty Tony Watson to Minneapolis instead of, you know, anyone else. And Pirates fans weren’t happy that I said so.

But credit where credit’s due: one pitch, one out, job done. Every pitch in Tony Watson’s All-Star career has resulted in an out, which makes him, on a rate basis at least, the best pitcher in the history of the Midsummer Classic.

But the real winner of the All-Star Game was southern New Jersey, which is churning out quality ballplayers like cranberries and tomatoes. Trout, the Millville Meteor, went 2-for-3 with a double and a triple and took home MVP honors. Tabernacle’s Sean Doolittle pitched a scoreless two-thirds of an inning of relief, while Toms River’s Todd Frazier, fresh off a surprising runner-up finish in the Home Run Derby, walked in his only plate appearance and made a nice play at third base.

I’m particularly excited that Trout, given his choice of Chevrolets for his MVP award, picked the Corvette. Not only because Corvettes are cool, but because Trout is from Millville and will therefore be unable to help himself from going mudding in the Pine Barrens in his new convertible, which is going to be hilarious. 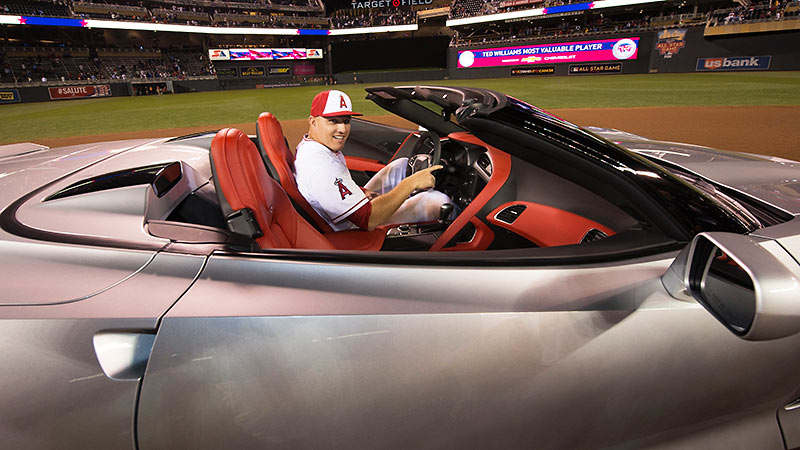