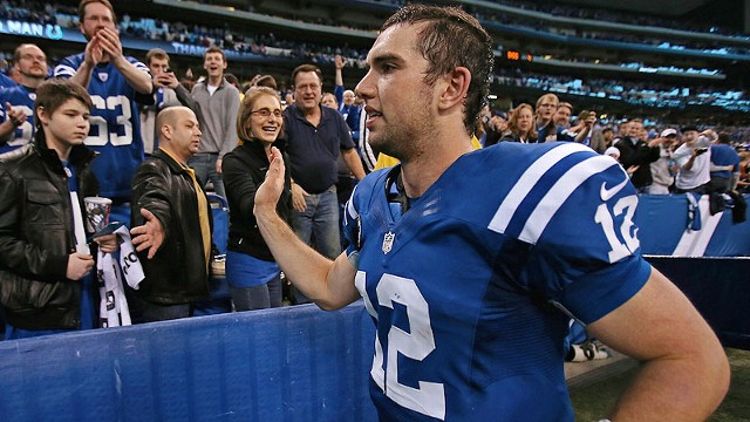 A couple of weeks ago, just before the Colts started their rookie minicamp, Andrew Luck was a guest on NFL Network’s NFL Total Access. Asked by host Scott Hanson how much more comfortable he felt going into this season compared to his first, Luck gave a platitude consistent with someone who owns this cell phone. “One hundred percent more comfortable,” Luck said. “On this day last year I was probably sitting in class.”

Like most things Luck has ever said, that doesn’t seem much worth reading into, but there’s still probably some truth to it. It’s important to remember that the era of the just-add-water rookie quarterback is still fairly new. When Matt Ryan threw for more than 3,000 yards in 2008, he was just the second rookie to ever do so. Last year, every rookie quarterback that started from Week 1 had at least 3,100. Luck’s 4,374 yards were enough to break Cam Newton’s rookie record set the year before, and everything about the Colts offseason points to Luck being even better in Year 2.

We can start with the fact that football is like any job, in the sense that the second time through anything comes with a welcome familiarity. According to just about everyone, Luck was a rookie in name only last year, but there’s still something to be said for having a handle on what an offseason looks like and knowing what to expect.

Then there are the actual details. In most situations, switching offensive coordinators from Year 1 to Year 2 might stunt the growth that should happen during that stretch, but for Luck, that likely isn’t going to be an issue. The man brought in to replace Bruce Arians (hired as the Cardinals’ head coach), Pep Hamilton, was Luck’s offensive coordinator during his final season at Stanford. I’d going to guess they have a rapport.

Hamilton will take over an offense with an intriguing set of weapons. Stanford ran mostly two–tight end sets during Luck’s final year there, and with Coby Fleener and (the underrated and likely to break out) Dwayne Allen, that’s likely to be a focal point. T.Y. Hilton had a very nice rookie season as the Colts’ deep threat, and Luck’s arrival injected enough life back into Reggie Wayne that we should see another productive season or two. The real improvement, though, is up front. Indy’s two main free-agent moves on offense were bringing in guard Donald Thomas from New England and tackle Gosder Cherilus from Detroit. The Colts were 18th in adjusted sack rate last season, but that figure is skewed by just how great Luck is at getting out of trouble. Cherilus is a huge upgrade over Winston Justice on the right side, and Thomas should perform significantly better than the combination of Jeff Linkenbach and Joe Reitz.

Then there’s Luck, who, if you don’t remember, was nothing short of excellent last year. Robert Griffin III’s Offensive Rookie of the Year award was legitimate, but 20 years from now, I figure it’s going to be one of those quirks that makes a group of dudes playing trivia at a bar start yelling at each other. Often running for his life, Luck showed off everything that made him great at Stanford, and showed the four or five critics he had on the entire planet that he certainly has the arm to make every NFL throw. The video above is more than eight minutes of actual highlights; every one of them deserves to be in there (especially the throw to Fleener at the 5:40 mark; yikes). Seriously, if you have the time, watch the whole thing. It was easy to take for granted just how good he was.

Still, though, there were the sorts of mistakes that rookies tend to make: forced throws, trying to do too much, moments of confusion. When Luck says he’s more comfortable, it’s likely those are the plays where we’ll see it. It’s easy for quarterbacks to put up gaudy numbers sooner these days, but making the big leap, the one into QB royalty, isn’t. With Luck, that wait isn’t going to be long. In fact, it might even come this year. On the list of NFL teams of whose fan bases I’m jealous, the Colts are no. 1 by a ways. And it’s not because of Bjoern Werner.