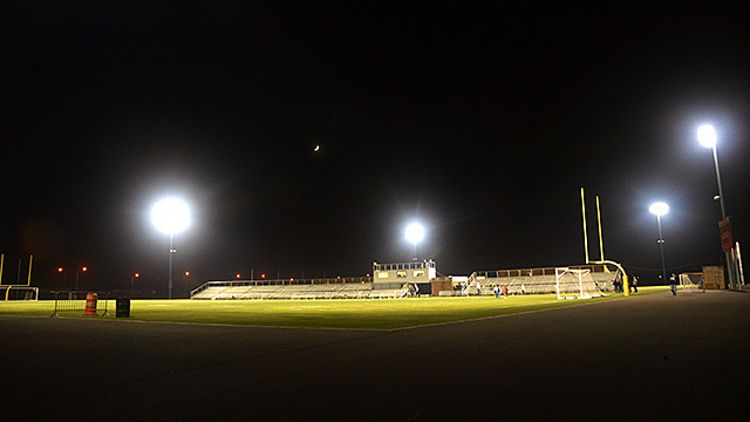 “What do you mean, white shirts?”

The Brooklyn Italians coaching staff looks worried. Less than an hour to go before the kickoff of their U.S. Open Cup first-round game at the Aviator Sports and Events Center in Brooklyn, and they’ve just discovered they’re not supposed to be wearing their usual blue jerseys for the game, and that apparently they’d been told this two weeks ago. (“Why’d they e-mail him? He was on vacation and he’s not even the right person.”) Nobody has brought the team’s spare white shirts, and after some internal debate, one of the younger members of the Brooklyn Italians entourage, Mario Frasca, is dispatched to take coach Lucio Russo’s car to get the shirts from Bensonhurst. As Frasca dutifully sprints across the field toward the parking lot, there’s a loud blast of music from the speakers on the side of the official scorer’s room/referee’s locker room/press box. It stops abruptly and a head appears around the door. “You guys playing the national anthem?” The assembled Brooklyn Italians turn to glare up at him for a beat, then one breaks off to deal with the ceremonial issues while the rest drift back to the locker room to wait for the non-blue kit to arrive. Welcome to the magic of the cup.

In 1977, Daily Mail writer Brian James set out to follow a team from the earliest qualifying stages of the FA Cup until it was defeated, at which point he would start to follow the victors. His journey started at a small midlands amateur side called Tividale and ended with Liverpool falling just short of a historical treble in the final. The resulting book, Journey to Wembley, is still one of my favorite variations on the “a season with” theme and probably where I first fell in love with the culture around the game — the part-time players of Tividale were no less vivid or interesting to me than the famous Liverpool players who James ended up following from the fifth round onward.

From the moment I’d learned that this year was to be the 100th edition of the U.S. Open Cup, I’d wanted to do something similar — if not physically traveling the country, at least following the fortunes of a single amateur side as they battled their way across temporarily repurposed football fields and sports complexes to possibly set up a date with an MLS side in the third round, then beyond. I’d shelved the idea as impractical until this mid-May afternoon, when I’d made a spur-of-the-moment decision to head by train and bus to the Aviator field, where the Brooklyn Italians were hosting Icon FC from New Jersey.

The Brooklyn Italians had long been a name that fascinated me as part of the 20th-century fabric of the game in the U.S. Founded in 1949, they’re a link to the game’s mid-century U.S. incarnation as a sport partly kept alive by the efforts of passionate immigrants. They’d enjoyed some success in this competition, too, winning it in 1979 and 1991. They currently play in the NPSL (the fourth “division” of the U.S. soccer pyramid) and have links to local university programs like Fordham and St. John’s, as well as informal connections to the soon-to-return New York Cosmos. After an indifferent 2012, Russo is optimistic about what this group of players can do this year.

Of course, the ultimate winners of the tournament will be awarded a place in the CONCACAF Champions League, and in theory, should they go further than, say, the L.A. Galaxy and Seattle Sounders (semifinalists this season) and actually win that tournament, there’s a potential place in the FIFA Club World Cup against the European and South American championship winners. A player can dream, right?

Arriving at the Aviator field earlier that evening, the global stage seemed a long way away. The venue is a sports complex at the site of what was once New York’s first, failed commercial airport. I know this from reading a historical information placard set in long grass near the entrance to the complex, a long walk from where the game will apparently be played. A diminutive figure appears in the middle distance and starts walking hurriedly in my direction. As he gets closer I see he has a tracksuit on. I ask him if he’s going to the game, and he doesn’t break stride:

As we wind through the temporary fairground, Henry Lino introduces himself. He’s Honduran, he plays attacking midfielder or forward for the Italians, and he’s just making his way to the game from his job with a local electricity firm. When I research him later, I note that, ironically, his coach had recently described him as “definitely the spark plug of this team.”

The field is modest. Two exposed rows of bleachers crouch beneath the fair’s Ferris wheel. On the opposite side of the field, what looks like a small stack of shipping containers turns out to be the hub of game operations. In half an hour I’ll be in the top one, wedged between the official scoreboard operator, a stats guy, and an assistant referee, taking a photograph (there are no printed spares) of a heavily scribbled-over team sheet, as we try to figure out who’s playing under what number in the changed Brooklyn kits.

As the game finally gets under way 20 minutes late — a few of which were due to the teams standing in an awkward formal line waiting for someone to press “play” on the national anthem — I leave the box and walk around the field taking photos and engaging in small talk with followers of both teams. My accent attracts attention. Someone wants to tell me about a friend who had a partial stake in English lower league club Oldham Athletic. Someone else asks me what I think of Jurgen Klinsmann: “I don’t get the ‘play 4-3-3’ at every level thing. I mean we’re [Brooklyn Italians] trying to get academy status … but it’s difficult. Actually, you see that big guy there, he also coaches some of the kids’ teams.”

I look to where he’s pointing, at the giant Haitian forward Yvener Guerrier, who’s trying to operate a little-and-large partnership with Lino. In fact, Icon FC scores first — something of a shock. They’re a USASA team (nearer to the fifth tier of American soccer) that was only founded in 2010. Nevertheless they have a certain pedigree: They feature former MLS player Danny Szetela and a decent looking forward named Argjent Duka, who gets the first goal. As the evening grows darker and cooler, Brooklyn tries to press back, but comes off at halftime having had maybe one half-chance at goal.

If Brooklyn entertains hopes of coming back quickly, it’s set back when Icon scores early in the second half — another Duka goal. The visitors’ bench becomes noticeably more voluble, soon heckling the referee for giving yellow cards without what they deem proper warning. The referee rolls his eyes and addresses the bench: “I didn’t give anything to anyone — I’m showing them, not giving them.” It’s a familiar ref’s retort, but it briefly silences the bench. They’re soon on their feet again though when a Kevin Garcia header gives Icon a 3-0 lead. Nine minutes later, Duka pounces on a clearance to complete his hat trick. Over on the far bleachers a small group cheers enthusiastically at the rout. Despite a consolation goal, it’s been a night to forget for the Italians, whose own bench now looks very muted. As the final whistle blows, they grimace as the excited Icon players pose for a team photograph under the electronic scoreboard in one corner of the field, with the winners perhaps already thinking about next week’s trip to Virginia to face the Richmond Kickers.

The crowd, such as it is, disperses quickly, though not before I’m accosted by one of the group that had been cheering Duka’s goals. He introduces himself as Afrim Spata: “You know the no. 11 — that’s my nephew. His brother (Dilly) plays for Chicago Fire. He could have been pro, too, but he’s too lazy. Make sure you put that. Did you hear me shouting to him to score a hat trick?”

I promise him I’ll mention Argjent’s “celebrity” connection and he moves on, satisfied. I find myself wondering how I’m going to get home. The funfair made for a nice backdrop to the game earlier, but now it seems downright eerie, and it’s hard to tell what shadowy figures are departing players and fans and what are just “shadowy figures.” A brief fistfight by the haunted house ends in a briefly prone figure being snarled at to “go to sleep, bitch!” by a bigger guy accompanied by a bored looking woman. A few minutes later I hear the sounds of loud and apparently vigorous sex coming from an empty tent near the parking lot where I’m waiting for my taxi. I wonder briefly if there’s any intersection between the two incidents, then I edge further into the parking lot to the relative safety of players trooping out in ones and twos back to their cars. I think of the Tividale players practicing in a parking lot on another continent 40 years ago, then I briefly catch sight of Henry Lino. He’d played fine, but his tournament is already over. He’s got work in the morning. Goodnight, Brooklyn.