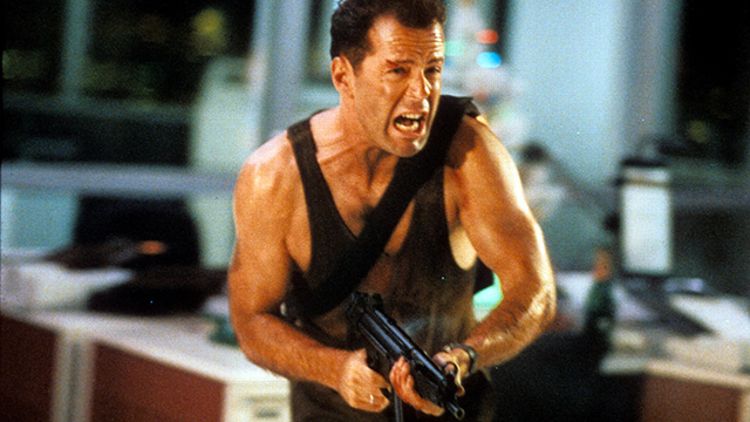 Forget all the eye-rolling surrounding the release of A Good Day to Die Hard this Valentine’s Day weekend — no cynical money grab of a fivequel can change the fact that Bruce Willis is an undeniable gift to American cinema.

Andy Greenwald: I honestly can’t believe there’s any debate here. This entire post should be devoted to clips of Bruce Willis in the Die Hard movies. We could subdivide it into most extreme kills, most sardonically raised eyebrows, most suspiciously inflated pecs. Essays could (and should!) be written about which exasperated African American partner got the best lines (Reginald VelJohnson 4 Evs) or which stressball, by-the-book commander blew the most gaskets (I see you, Larry Bryggman!). John McClane, immortal, exhausted John McClane, is the best role of Bruce Willis’s life. What other part would offer a gifted performer, whose go-to expression could best be described as “smiling while walking across broken glass,” the chance to do exactly that? Hamlet? I don’t think so.

It’s not even possible to overstate how huge a deal this role and this movie was when it came out in 1988. Die Hard redefined action flicks, making them tougher, funnier, weirder. The stakes got bigger while the characters became more refined. Die Hard allowed men to be named Argyle, and it made ballet dancers terrifying. But most importantly, it showed that a hard-working, fast-talking accidental TV star from the Jersey boardwalk could somehow become the biggest star in the world. Yippie-ki-yay, ad infinitum.

Sean Fennessey: Tarantino performances are all about line readings. If you speak QT, you win with QT. This is a fun one from Bruce: casual, grim, funny. But it’s also burned into my brain like a visit to Zed’s dungeon, because this 23-second clip appears on the soundtrack to Pulp, an album I listened to constantly as a teenager — for the surf rock, for the Al Green, for the Maria McKee, but especially for the snippets of dialogue from the movie. Particularly “Ezekiel 25:17” (Note: Not the actual scripture), Pumpkin and Honey Bunny unleashing hell on that diner, “Bring out the gimp,” and Zed’s audible death certificate. Funny thing, though. On the soundtrack, that bit of interplay between Willis and Maria de Medeiros (WHERE DID YOU GO?) is followed by The Centurians’ “Bullwinkle Part II.” In the movie, it’s followed by The Marketts’ “Out of Limits.” The latter was released in ’63; the former in ’64. Both bands came out of Southern California and both played a kind of modified, cleaned-up surf rock. Both songs reference television icons of the mid-60s, one a Rod Serling-created anthology series, the other a talking moose. And neither are as badass as “Misirlou.” But each are lucky enough to be forever linked to Willis’s immortal line reading.

Katie Baker: I can’t nominate any of the Bruce Willis clips from the end of Armageddon (which is probably in my personal top 5 most frequently watched movies, by the way, and I don’t care who knows it) because I don’t feel like turning into a sobbing, wretched, snot-nosed mess right about now. So here’s a scene from the more comedic beginning of the movie instead. Such masterful use of that golf club! (Although it was a tough call, prop-wise, between that and his paper shuffling in the “requests” scene.) I have asked you REPEATEDLY to call me dad.

Charles P. Pierce: It’s long been my opinion that Bruce Willis is best when somebody throws him a little supporting role character study that forces him to abandon both his smartest-bartender-at-the-Blarney-Stone persona, and his action-hero drag. That’s what Tarantino did for him in Pulp Fiction, and it’s also what Robert Benton brought out of him as Carl Roebuck, the small-town conniver and pretend-construction mogul in Nobody’s Fool, which is for my money one of the most underrated movies of the past 30 years. He gets to play off Paul Newman’s local hero in a number of gentle, funny scenes, including a running gag about the theft of a snowblower and a poker game in which somebody bets both a gun and a wooden leg. But because YouTube is killing me today, I can’t find a clip of them together so, instead, here’s the best scene in the film, a discussion about gun rights that seems rather relevant these days. Trust me. Willis’s whole performance is fully in the spirit of this clip.

Amos Barshad: Hudson Hawk, now, is an indulgent movie-star cautionary tale: Bruce Willis wanted to wear a fedora and sing Bing Crosby songs and steal Renaissance “clockpunk” artifacts in outlandish fashion, and so he whipped up this monstrosity and he put himself on the soundtrack, and now we all laugh about how terrible it is (check out vintage Siskel and Ebert, above, just tearing it into tiny little pieces). But when I was 9, Hudson Hawk was on TV a lot, and it was goddamn hilarious; there’s a running gag where Hawk just wants a cappuccino but can’t get a cappuccino, but by the end of the movie he does get a cappuccino, and, like, that was right up my alley. Years later I found out how the world at large saw Hawk, and it was a little crushing but also a little nice. Imagine, now, a time and place where you don’t have to react to a narrative: You could just be like, “yo Bruce Willis is bombing down a highway on a hospital gurney and he just caught a cigarette in mid-air and now he tossed exact change into the toll booth to get through the toll gate this is that crack,” and that’s a completely valid opinion.

Dan Silver: Exclude Norman Jewison’s mostly forgettable In Country, and the four films Bruce Willis released between 1988 and 1990 were Die Hard, Look Who’s Talking, Die Hard 2, and Look Who’s Talking Too (with the later two coming within six months of each other). I don’t know if there’s any deep significance to that sequence, but I do find it interesting that two of those films established and solidified Willis as a bona fide international movie star (and restaurateur, lest we forget Planet Hollywood and The Schwarzenegger Szechuan Shrimp Scampi), eternally fusing him with a character who’s still shockingly relevant and lucrative today. While the other two films feel more dated than the shoulder pads glued into Kirstie Alley’s puffy shirts. I’m a fan of the funny Willis, but all his lines as the voice of baby Mikey’s inner thoughts play like cuts from a Bruce Willis “Moonlighting” soundboard. It’s remarkable a film (the first Look Who’s Talking) that now elicits more cringes than smiles made $297 million worldwide — that’s $14 million more than John Carter made last year — with 1989 ticket prices. Yippie-Ki-Yay Mother, Father, and Talking Baby!

Friends, “The One Where Paul’s The Man”

Emily Yoshida: Basic sitcom writing is based on escalation, but for me, nothing in this scene could have possibly escalated past Bruce Willis serenely declaring himself a “neat guy” in the mirror, except maybe that impressive Ross Geller sideways body roll eight seconds in. But one of these men won an Emmy and one did not, so, you know, the experts have spoken.

Tess Lynch: Death Becomes Her, also known as The Real Housewives of Dystopic Fiction, gets a lousy 43 percent rating on Rotten Tomatoes (“further evidence that Zemeckis is the anti-Christ,” “nasty, effects-driven satire”). Whatever, this belongs in Bruce’s canon; it’s Die Hard Over and Over.