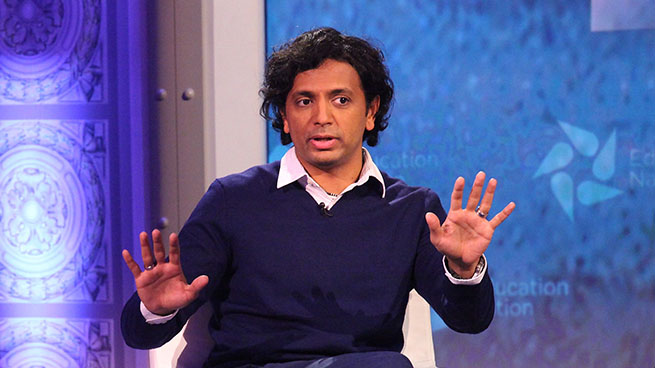 M. Night Shyamalan needs some stability in his post–After Earth life. So why not reteam with Bruce Willis, the star of his two best movies (his two good movies?), The Sixth Sense andUnbreakable? The movie is Labor of Love, one of the first scripts Shyamalan ever sold. Should Willis come aboard, he’ll play a Philadelphia man whose wife dies in an accident. “Never big on words, he becomes haunted by the notion that he never properly told his wife how much he loved her,” Deadline writes. “Since she once asked if he would walk across the country for her, he decides to show her posthumously just how much he did love her.” Awwww! But seriously, M., this needs to be a good one.

Jimmy Kimmel asked people what they thought of the State of the Union address before it happened. They answered.
https://www.youtube.com/watch?v=kWI58bgdVfw

Former Academy of Motion Picture Arts and Sciences president Tom Sherak got his Walk of Fame star hours before he died of prostate cancer.

The Biebs supposedly wants to press pause and open a tattoo shop with his pops. Also: a petition to have him deported has reached 119,000 signatures, meaning the White House will respond.

Here’s the first trailer for The Fault in Our Stars, based on John Green’s young-adult cancer novel and starring Shailene Woodley, Ansel Elgort, and Laura Dern.

Everybody Loves Raymond creator Phil Rosenthal sold ABC a sitcom pilot called The Winklers, based on Henry Winkler’s family. Fonz isn’t locked down to star yet, though.

The Grand Budapest Hotel has a pretty wild website.

Thomas Lennon and Robert Ben Garant (Reno 911!, The State) are scooping up these nostalgia products left and right: first Baywatch and The Naked Gun, now Choose Your Own Adventure.

And now J. Cole has a label.

Justin Bieber Went to Jail Again, This Time in Toronto