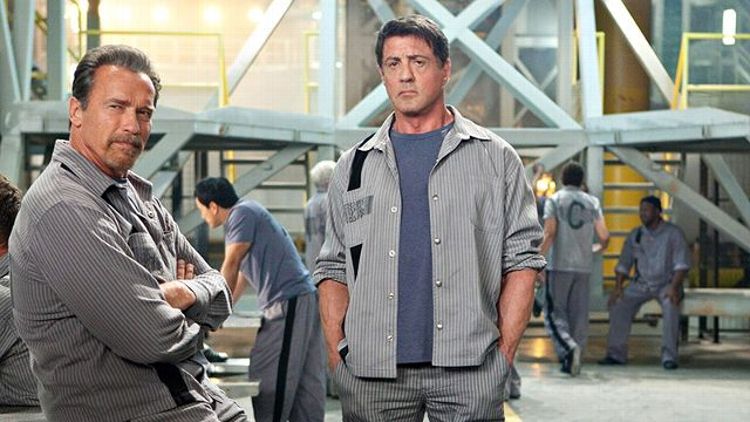 With 2010’s action mega-star team-up The Expendables, Sylvester Stallone and Arnold Schwarzenegger officially deaded a long-dormant rivalry. Sly wrote Arnold a cameo; Arnold, then still the Governator, graciously appeared for free. Last year, they went for Round 2, with Schwarzenegger playing a bigger role in the sequel, The Expendables 2. And today comes Escape Plan, the first-ever proper tag team from the ’80s action gods. So how come it took so long?

Well, back in the prime days, as Stallone explained to David Letterman, he had a “violent hatred” for Schwarzenegger. “Have you ever had that ever? Competition where you really had an archenemy that kind of brings out the best in you. As Arnold would say, it really pushed you to accelerate.” Stallone hated “that [Schwarzenegger] was on the planet, basically.” Then, “After a while, I started to like this competition, this one-upmanship. He’d get a bigger gun. I’d shoot more people. He’d shoot more people. But then, he went into science fiction, which kind of left me behind.”

The thaw in the relationship came when Arnold began his political career. “He started inviting me to events,” Stallone has said. “I said no, then my wife says, ‘Come on, he’s extending the olive branch,’ and next thing I know is I’m on the campaign trail, then we just hit it off.”

There were offers, though, before the peacemaking. Schwarzenegger told Access Hollywood, “The interesting thing really, is that for decades, they’ve tried to put us together in a movie and the scripts were horrible. It was like dreadful. We could not have accepted any of that. One movie wanted us to be undercover agents in drag, and another movie wanted us to change from human beings to animals. So he was the dog and I was the cat and we were fighting each other. It was some comedy. It was all this ludicrous stuff.” Says Stallone, “They say, ‘Hey, why don’t you do one where you dress up as female cops?’ Yeah, that’ll work. No one will suspect that. Or then we were a dog and a cat, so it’s a metaphor. And then we were bickering neighbors.” Arnold also told Entertainment Tonight, “We have talked about it for three decades and it never happened. I think we tried maybe too hard. But now after the governorship, somehow this just fell into place.”

The biggest what-if, though, was the rumored original iteration of Inglourious Basterds: Supposedly, Quentin Tarantino wanted to put the Sly, Arnold, and Bruce Willis dream team together. Here’s one quote attributed to Tarantino: “I’ve said it once and I am going to say it again. I want Bruce, Sly and Arnold for my World War II epic. I have always dream of having these three superstars together in a movie.” But, as you might have guessed from that weird syntax, Tarantino never actually said that. He’s debunked the rumor a couple of times, once while pushing Grindhouse:

“Inglorious Bastards [sic] — I never said it was going to star Bruce Willis, Schwarzenegger and Stallone. I don’t know who’s going to be in it at this point. I have to write it first. It always starts with me and the characters. Whenever I cast an actor and try to write the character around it I always end up regretting it, so I always try to write the character and cast the actor to fit the character. Whenever I’ve written the character like in the case of Zoë [Bell] or Vanessa [Ferlito], where I know they’re who I want to play, I write it about them. Vanessa is Vanessa and Zoë is Zoë. It’s not like I thought, ‘I like Kurt Russell for [Stuntman] Mike, he’d be very good.’ No, I wrote Zoë. And if I couldn’t get Zoë, I’d have to throw the script away because I couldn’t do it. Same with Uma [Thurman], but she said she could do it [Kill Bill] so we did.” And then again: “That was all rumors and stuff. That was just all internet rumors. Nothing against him, I’m just saying there was Bruce Willis, Sylvester Stallone…none of that ever came from me.”

In 2007, during an Ain’t It Cool News Q&A, Willis addressed the possibility without actually touching on Basterds:

Back when we were all working during the same years, someone was always suggesting that Sly, Arnold and I get together and do a Movie together. I was certainly up for it, but no one ever wrote a script that would have included all 3 of us that I know of. These days, Arnold is the Governor, Sly is off doing Rambo, etc., so while it WOULD be an interesting idea for a movie, I don’t know if it will ever happen. A ‘Great Escape’–type film would be fun though…

The three actors actually did end up working together, on the Expendables movies, but now the dream is over: Sly got real mad at Bruce’s $1 million–a-day contract demands — “GREEDY AND LAZY …… A SURE FORMULA FOR CAREER FAILURE” — and ended up subbing in Harrison Ford.

But somewhere out there, a brave few hold hope. There are 27 signatures on this here petition at Petition.com. Twenty-seven strong.

To the Director of Pulp Fiction, Kill Bill and Reservoir Dogs; Quentin Tarantino:

We, the undersigned, would love to see the following casts in your upcoming World War II epic film; Inglorious Bastards either fully or as part of, as mentioned by you in the past years. We hope you would not change your mind on these casts as they are one of the greatest action heroes and still are as many fans are eager to see them all in one big movie especially helmed by an A-list director like Quentin Tarantino.

You made a bold choice of intending to have them in your movie and we hope you will remain with it.

Universal's Classic Monsters May Start Getting the Avengers Treatment

Songs of the Week: CMJ Edition