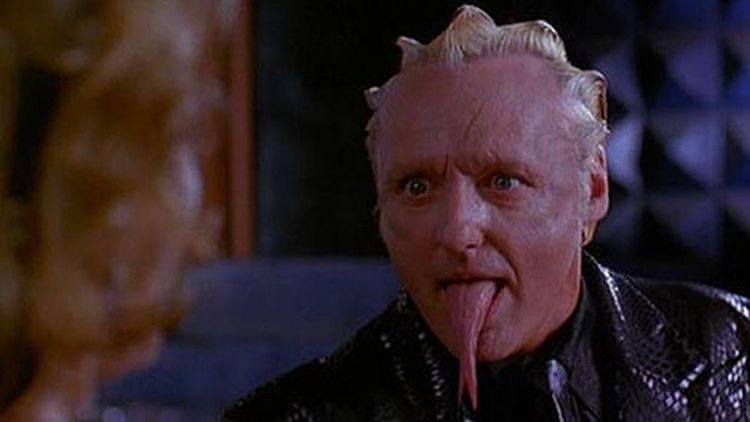 Even the most celebrated thespians of our time need summer homes. This week on the HOF we’re looking at talented actors in the most shameless money grabs of their careers — those moments when it’s time to put on the lizard suit and fill that trust fund for your kids. Here are the Grantland staff’s picks for most blatant paycheck movies.

(Begins at the 51-minute mark)

Alex Pappademas: Sure, it can be fun to watch a great actor phone in a performance so totally devoid of care or personal investment that you can almost feel the cool, refreshing waters of the new pool they’re paying for. But it’s arguably more fun to watch what happens when fiscal necessity compels an actor incapable of anything less than full-on, red-zone, crazy-eyes commitment to take a role that doesn’t really require it. Ladies and gentlemen, I give you Dennis Hopper as final boss “King Koopa” in 1993’s Super Mario Bros..

Here’s how Hopper remembered the project in a 2008 interview with Conan O’Brien, who’d asked him about his regrets:

The darndest things: Kids be saying them! And now, for the sake of contrast and illumination, here is a quote from a staggeringly thorough interview with Parker Bennett, one of many credited and uncredited screenwriters who labored to wrestle the Mario concept into something resembling movie-like shape:

It didn’t matter that this was a movie based on a series of whimsical video games about plumbers breaking bricks with their heads, or that most of the Koopa dialogue they did keep was stuff like “Without this piece, the meteorite lays dormant! I’ll not be able to merge the dimensions!” If you fucked with his performance, Hopper was going to go Merriam-Webster on your ass, period. Everyone else in the film seems checked out; Bob Hoskins and John Leguizamo, who played Mario and Luigi, reportedly took to downing shots of whiskey together between takes, and you can’t not tell. But Hopper invests Koopa (who’s been reimagined as a humanoid dinosaur rather than a turtle, because movies need to be realistic) with a creepy intensity, whether he’s lying back in a mud bath, disinfecting his hands after contact with humans, or — in the best-worst scene in the film — hissing gross sexual overtures at Samantha Mathis’s Princess Daisy like he’s looking for a nitrous tank to huff from. Enjoy your nightmares, kids.

Mark Lisanti: Marlon Brando’s cameo as Jor-El in the original Superman is perhaps the ultimate paycheck performance. Brando famously pocketed $3.7 million for less than two weeks of work … and he also got 11.75 percent of the gross, pushing his take up to $19 million.

But that’s not the best part. The best part is this story from director Richard Donner:

It takes some real superballs to ask for $3.7 million to play a radioactive bread-circle.

Tara Ariano: To be fair, no one in Valentine’s Day is exactly covering himself or herself with glory: The finished product is less a movie than a collage of called-in favors. But no one’s participation was more cynical than that of Julia Roberts. I mean, I know that winning an Oscar raises your quote; that’s only fair. But Jamie Foxx and Shirley MacLaine were Oscar winners, too, and they didn’t get paid anything like the $500,000 per minute onscreen that Roberts did. (In addition to the gross overpayment, I also take issue with how nonsensical Roberts’s story line is. She spends the whole day traveling just so she can give her kid one kiss and then immediately turn around and leave like she was never there? BOO.)

Orson Welles, The Transformers: The Movie

Andy Greenwald: At the ripe age of 25, Orson Welles made Citizen Kane, the greatest film in Hollywood history. At the rotten age of 70, Welles provided the voice of Unicron, the Living Planet, in the animated film The Transformers: The Movie. He died before it was released. To his credit, Welles did his slurry best to bring some gravitas to a character whose main purpose is to snack on Sharkticons, and it’s sort of hard to fault a legend for needing some extra walking-around money — after all, gallon jugs of Paul Masson wine don’t pay for themselves. But it’s undeniably tough to stomach, let alone comprehend, the artistic arc from whispering “Rosebud” to croaking “you cannot destroy my destin-ahhhh!” while the soaring chords of “You Got the Touch” jam in the background. Still, maybe the passing of time ought to make us a little more charitable. After all, according to Wikipedia, Unicron’s identity “expanded over the years from simply being a large robot to being a God of chaos who devours realities.” Couldn’t the exact same ravenous epitaph be written for Welles?

Bill Barnwell: Eric Bogosian’s résumé is basically impeccable. As an award-winning playwright, actor, and novelist, there’s very little Bogosian can’t do. If you went out to karaoke with Bogosian, he would do “Luckiest Guy on the Lower East Side” and get a standing ovation. Just how it goes. Even his foray into television produced an extensive run on Law & Order: Criminal Intent, and nobody can knock anybody for fucking with Dick Wolf.

With that all being said: How on earth did Bogosian end up as the bad guy in Under Siege 2: Dark Territory? The character — brilliant computer programmer gone bad after being left out to dry by the government — is as one-note as his evil name, Travis Dane. In a way, you can understand why Bogosian took the role: It probably took a few days to shoot, since the vast majority of Bogosian’s scenes take place inside one train car or in front of a video camera, and considering what he’s surrounded by, well, he looks like the best actor on this or any other planet. But it’s a Steven Seagal movie! This is a classic paycheck performance. (And on a mind-blowing side note, Seagal’s niece, Sarah Ryback, joins her uncle on the train but eventually gets kidnapped and used as bait to attract Seagal. That pepper spray–launching niece? Katherine Heigl.)

netw3rk: After I selected Michael Caine’s performance in Jaws: The Revenge, Wesley Morris mentioned in an e-mail thread that Caine has done so many paycheck flicks that every staff writer at Grantland wouldn’t be enough to cover them all. When a Pulitzer Prize winner for criticism criticizes me, I listen. That’s why, instead of Caine, I’m selecting the soulless, money-grubbing Jaws: The Revenge performance of Animatronic Shark. You were once the star of Jaws, the movie that basically invented the summer blockbuster, Animatronic Shark! The movie that launched Steven Spielberg’s career! Now you’re starring in this schlock with Mario Van Peebles and a washed-up Caine about a thrice-deceased shark that inexplicably follows the family of Sheriff Michael Brody to the Bahamas? Anyway, the best video I could find of Shark is about a minute into this compilation of Caine moments in Jaws: The Revenge, in which Shark is seen lazily going through the motions of devouring a seaplane.