We Went There: Feeling the Heat of a ‘Boogie Nights’ Live Read 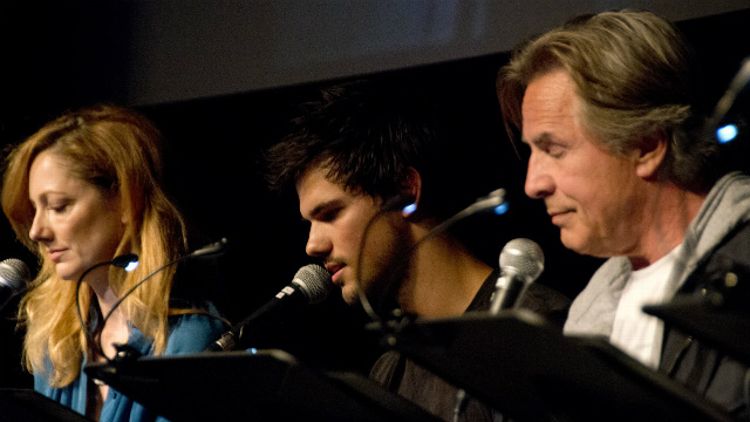 “For the third anniversary of Film Independent at LACMA’s Live Read, we have a story about a boy and his pet.” Critic and LACMA curator Elvis Mitchell typically introduces the semi-regular Live Read with a wry bon mot describing the film he and filmmaker Jason Reitman have selected, and this is how Mitchell prepared a packed house for the first film of the new season, Boogie Nights. (For more on how the unrecorded, one-night-only Live Read events work, see here.)

Boogie Nights, of course, has only grown in stature since it was first released 16 years ago. It is an uncommonly ambitious, devastating, absurd Scorsese-esque look at the rise and fall of a small enclave of pornographers living in the San Fernando Valley in the late ’70s and early ’80s. I’ve always thought of it as a hilarious tragedy. Last night may have inverted that idea.

Reitman opted to read from Anderson’s original shooting script, so there were a handful of scenes presented last night that most viewers have never seen, including a pivotal grace note after the infamous Night Ranger/Rick Springfield–soundtracked shootout at Rahad Jackson’s house. The scene is an early morning return visit to Dirk’s childhood home, where he finds his high school girlfriend Sheryl Lynn living with her new family, and learns that his parents have been killed by a drunk driver (revealed to be Johnny Doe, Dirk’s porn star rival, in a flashback). Dirk is crushed and confused in the moment and we’re meant to believe that this precipitates his return to Jack’s home and the second family he’d abandoned, as well as the movie’s ending.

With this added scene — wisely cut by Anderson, ultimately — and a handful of others one might expect it would have slowed a story that already runs two hours and 35 minutes. But this reading breezed by in just more than two hours, thanks in large part to the tone. Played differently, and with more air in its lungs, Boogie Nights is a broad sex comedy. The laugh lines are huge. The set pieces are ridiculous. The relationships are preposterous. And yet, Anderson infuses the movie with so much whirring intensity, you often feel like you’re watching deathly serious high art. (Little Bill’s murder-suicide happened in a flash, with Reitman briskly reading the stage direction of the second act climax. In the movie it is a methodical, feverish burn to the kill.) But the cast seemed to love the movie, and knew their lines cold. This meant more faux-dramatic pauses and knowing recitations. “Jack says you have a great big cock,” Pollak purred during the pool party scene. Like schoolchildren, everyone in the audience and on stage cackled. “May I see it?” This is the exact same experience I had watching the movie over and over again in college — exaggerated, obnoxious line readings meant to make my friends laugh. Kevin Pollak is funnier.

Lautner and Johnson, seated beside each other, were the evening’s highlight. Two underestimated but wily studs, two generations apart, they shared more than one knowing glance. Lautner was an inspired choice for Dirk Diggler, and even better than I’d guessed — flat affect, skin-deep charisma, undeniable physical presence. But Lautner was hilarious, too — he fully committed to renditions of “Feel My Heat” and “You Got the Touch,” Diggler’s pair of nightmarish power ballads. I don’t know how many times Lautner has seen Boogie Nights, but he was quite good at delivering Diggler’s Brock Landers line: “I’m gonna ask you one more time and I’m gonna ask you nice: Where the FUCK is Ringo?” he barked, before emphatically flipping his script page. And Johnson made a case for supplanting Burt Reynolds altogether — his wearied, leathery voice was so perfect whispering to Lautner, “Doesn’t matter … if you don’t have those juices flowing … down there … in the Mr. Torpedo area … in the fun zone.” Johnson wore bright red Nike Free 4.0 sneakers, dad jeans, and a gray hooded sweatshirt. He did not look the part. No one does at the readings. But he’s got insight into these characters, a veteran of the ’70s freewheeling sexual revolution with, well, a relevant reputation. I recently saw Johnson in 1975’s A Boy and His Dog — coincidentally another story about a kid and his pet, wandering the terrain of a post-apocalyptic America, seeking refuge and sex. They’d make a hell of a double feature, with Johnson as a slightly more enlightened Dirk Diggler. Last night, he reached the logical conclusion of a stud’s life — one hopes he never arrives at his Colonel phase.

Anderson’s shooting script revealed other little film-nerd nuances throughout the night — “40 frames per second” one stage direction read. “Handheld” for Little Bill’s death march into Jack’s house. “I think you’re one gin past this conversation,” Gondolli says firmly to Horner during their conversation about the coming porn video revolution — I’d never caught that line before. One extended stage direction for a scene at Maurice’s Hot Traxx nightclub identified a “black midget DJ surrounded by beautiful women doing coke.” During the scene when Amber and Rollergirl hoover cocaine and manically discuss plans they’ll never execute, Greer and Whitman hilariously pinged back and forth like two chattering banshees. “Are you my mother?!” Whitman bleated. The phrase “and they do more coke” appears four times in the script.

Boogie Nights’s final scene — when Dirk unsheathes his sword alone in a dressing room — is the tragicomic cap on the story. Lautner, though game all night, did not stand up and drop trou. But he did raise his head from his script and lock eyes with the audience. Just as Anderson envisioned it: A self-aware slab of beef. A karate champion. A star. A big, bright, shining star.