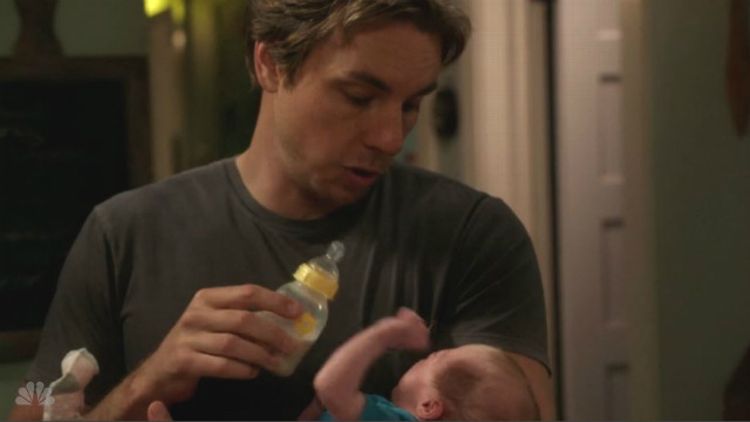 Impressive week for Parenthood. All four adult siblings and their significant others got some major screen time, as did the Braverman grandparents. It was a week of couples’ quarrels and struggles, only some of which we cared about. Yet despite six plots actively advancing, the episode was short on tears.

Why did Crosby and Jasmine name their daughter Aida? Were all the writers temporarily replaced on the day that they chose the name? “Aida” is ugly. Aida is about an enslaved princess. There are no obvious nicknames for “Aida,” and the child is sentenced to a lifetime of people mispronouncing her name. Perhaps the writers are already regretting the choice, because even though the baby is central to the plot, they say her name at a minimum. Probably because it’s a terrible name, a fact we repeatedly confronted this week because of an abundance of baby time.

Drew Holt lives! He’s in college at Berkeley now, so we haven’t seen too much from the quietest Braverman. But this week, his roommate sexiles him (a plot device my Parenthood-loving comrade David Jacoby predicted months ago, though with different consequences), so he goes to his sister Amber’s apartment for refuge. After he’s sexiled a second time by his lax bro roommate, who has also now taken Drew’s bedsheets, Ryan and Amber go with him to confront the roommate. This is a terrible idea that would never work in real life, but in Braverman world Ryan successfully intimidates the lax bro. Drew even gets the room to himself to play Scrabble with his crush. He generally seems glum, yet his story lines stay inexplicably entertaining. Perhaps because they’re often more lighthearted and he needs better story lines. The greatest byproduct of this subplot, though, was watching Ryan partake in some revelry. Up to this point, Ryan has been a sulking kind-of-alcoholic, and he has not seemed good enough for our beloved Amber. Shades of a fun Ryan finally came through this week. Let us rejoice.

Sarah and Hank are making an impressive campaign for best fictional couple of all time. It’s close to sacrilege. How can this nascent duo compete with Doug Ross and Carol Hathaway, Ben Covington and Felicity Porter, or Cory Matthews and Topanga Lawrence? Every week they fall into a singular rhythm that defines their onscreen interactions, and it’s like listening to a verbal dance. This week Hank affirms Sarah’s skills as a photographer, and she responds with a gigantic smile. It was adorable. These two are headed for a reunion, which then means either another breakup or marriage.

It could have been when Joel sat down next to Julia on the couch as she practiced reading with her kids. It could have been when Crosby finally got Aida (ugh) to accept a bottle, thereby bonding with his daughter. Maybe it could have been when Camille revealed her grand dream to Zeek for their AARP life, mispronouncing “Seine” along the way. Oh wait — no one cried during that moment. We’ve been given so little to love about Camille. Why would her plans to abandon Berkeley and the house that Zeek built resonate with viewers now? The state of their house and what to do with it is the fulcrum on which the grandparents’ story line rests this season. While there are many memorable TV houses that almost function as characters — the Tanner house on Full House, Lorelai’s place on Gilmore Girls, the Whites’ house on Breaking Bad, Monica and Rachel’s apartment on Friends, just to name a few — the Braverman manse is definitely not one of them. Amber’s room was deliberately decorated with posters and the kitchen was an Anthropologie lover’s dream, but viewers don’t have the same intimate knowledge of that house, and there’s little investment in a plot about whether it stays or not. Adam and Kristina’s house is the real heart of the show anyway.

Ultimately, no single plot carried the final punch to get the tear ducts going. All we’re left to wonder about is who is going to cheat first: Julia and the unemployed dad or Joel and the architect? My money is on Joel, and I’m crying thinking about it.

We Went There: Feeling the Heat of a ‘Boogie Nights’ Live Read