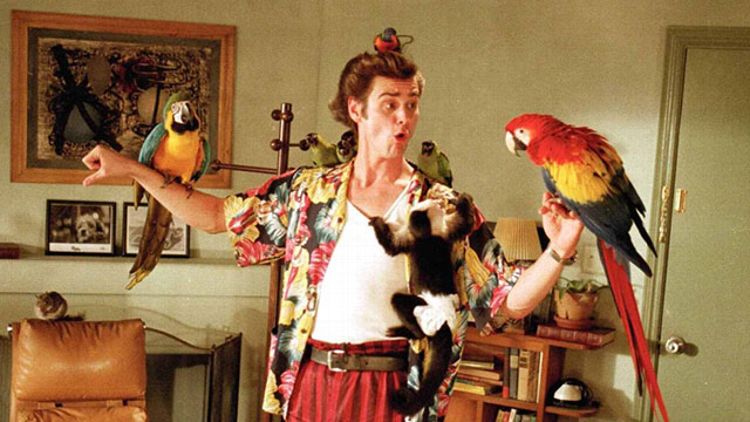 Jim Carrey, reigning funnyman of your childhood/adolescence/actual adulthood, is back this week — almost unrecognizably — as Colonel Stars and Stripes in Kick Ass 2. It’s been a long time since those halcyon days when it seemed like there was at least one high-profile Carrey vehicle coming out every year, so let’s take a look back at some of the high points of his storied career.

Amos Barshad: General consensus on The Cable Guy is that it was a well-intentioned box office flop that has found something of a second life as a cult classic, albeit a mitigated one (like, in your standard “kitchen during party” conversation scenario, you wouldn’t have to forcefully argue its merits to get some murmurs and nods. But if you ended up riding a little too hard for it, you’d have to brace for some eye rolls). That said: If you saw it first on actual cable, and never knew it didn’t end up making as much money as it was supposed to, or that a lot of people thought it was really ugly and totally sad, then you wouldn’t think twice embracing it as the out-and-out tour de force that it is. Which, I think it’s safe to say, is something that me and the blessed soul who put up this clip up on YouTube — an anonymous individual calling him or herself only TheCableGuy0125 — are in total agreement on.

netw3rk: This video is from March of 2007, right as people were starting to realize what pure, righteous absurdity David Caruso’s CSI: Miami Horatio Caine cold opens were. After this, Caine-splaining would become one of the most structurally versatile memes, giving a person the option to use still pictures, cartoons, or ascii-text drawings to lampoon Caine’s lame one-liners. I didn’t realize Jim Carrey could kick off memes,

Bill Simmons: No scene in the history of film has made my kids laugh more than this one.

Dan Silver: I will never not laugh at Carrey slamming his face into the bench. It’s right up there on the rewind/re-watch list with with “Smile, you son of bitch” from Jaws.

Jonah Keri: “Dan Marino should die of gonorrhea and rot in hell.” Looks like someone’s still bitter over the ’83 draft.

Mark Lisanti: If you had access to cable television in the [decade redacted], there’s a 100 percent chance you’re aware that a very young Jim Carrey starred in a vampire comedy called Once Bitten. (Vampire comedies were a thing in [decade redacted]! Ask [famously over-tanned actor name redacted]!)

In this vampire comedy, there was a dance-off between the very young and recently vampirized/devirginized Jim Carrey, the vampiress who turned him (played by Lauren Hutton — uh, you know, ask your great-aunt), and Carrey’s girlfriend, who, in the great tradition of high school–set movies in the [decade redacted], was pushing 30 at the time she took the part. The stakes? Carrey’s very soul. This should become obvious by the end of the dance-off, when Carrey pulls out a more-than-credible combo of Michael Jackson’s signature moves, and then twists his leg up at an inhuman angle to play a lick on the leg-guitar. It should be noted that you should never attempt to re-create that guitar move; at best you will rupture a hamstring, at worst your heart will explode from the exertion, and you will spend your last moment on the mortal plane vomiting up a vintage Gene Simmons–quality stream of blood. You don’t want to go out that way.

My point being: Vampire movies don’t have enough dance-offs these days. Everything was better in the [decade redacted].

Alex Pappademas: I need to drop a mixtape just so I can use “I like rap music as much as the next frightened Caucasian, but would it kill you every once in a while to play a little Foghat?” on the intro. PLATINUM IN THE STREETS. I’m pretty sure I remember the late-’90s MTV Movie Awards telecasts as being hipper/more meta-awards-show stunty than they actually were. That’s probably/entirely because of this moment from 1999, when Jim Carrey accepted the Best Male Performance popcorn bucket for The Truman Show in Morrison/Manson wig and matching shitfaced swagger. Carrey was deep in his Andy Kaufman zone at the time — hence all the crowd shots of a cheering, braless Courtney Love — but this is a greater tribute to Kaufman’s free-radical legacy than Man on the Moon. It’s also one of the best performances of his career: You really believe he has a batch of crank simmering in his bathtub back home and a horse with no name valet-parked outside. (He also carried on long conversations backstage with people like Samuel L. Jackson while remaining in character as a guy who, win or lose, is going home tonight to take some reds and crank “Slow Ride.”) Carrey drifts in and out of consciousness, announces that after this year’s Oscar race, he’s realized that “dancin’ for the Man just ain’t where it’s at,” thanks his “new biker friends” before MTV, and shouts out all the “fine-looking p—y in this room tonight.” Control-booth person who decided to cut to Keri Russell on this line, I hope they gave you a hundred raises.

Sean Fennessey:“Good evening, my name is Jim Carrey, I’m a singing comic impressionist.” This has always been my favorite thing about Carrey. Impressionists are the bottom rung of the comic phylum. Somehow this one turned into the biggest comedy star of his generation. Look at his Bruce Dern!

Katie Baker: First of all, Jim Carrey’s IMDB page is honestly breathtaking — it goes from “Doing Time on Maple Drive (TV movie)” in 1992 to the following string of movies ending in 1998:

(Can I commission a Grantland bracket for arcs that compare to that? Who do I email?) Anyway it’s hard to remember it being this way now, but when The Truman Show came out it was kind of mildly dystopian — yes, The Real World existed, but it was still about two years before the inaugural seasons of Survivor and Big Brother would air. But given everything that’s transpired since, the scene where he first starts to realize that something’s up in Radioland is even more eerie in hindsight than it was at the time. (Parts 2 and 3 are here.)

Patricia Lee: This movie is from 10 years ago. TEN YEARS AGO! Though Jim Carrey has been in quite a few movies after this one (Eternal Sunshine, Yes Man, Fun With Dick and Jane), Bruce Almighty is the one that stands out the most to me from the last decade. From his flopping around in bed refusing to get up (a daily must-do for me) to the classic, predictable scene with his dog peeing everywhere (thank goodness my dog is potty trained) to the blood type pun/joke he makes, Carrey’s performance in the movie will always and forever be B-E-A-Utiful.

Eternal Sunshine of the Spotless Mind

Andy Greenwald: Can I be honest with you guys for a second? This is a safe space, right? I feel like I have to come clean about something: I’ve never found Jim Carrey funny. Not in the slightest. Not when he was burning down the walls on In Living Color, not when he was pet detecting, and definitely not when he was pulling Will McAvoy’s tongue off of a frozen pole. But when Fireman Bob sees fit to turn down the water pressure just a bit and stop soaking everyone around him, he can be really good. Like, really, really good. In Eternal Sunshine of the Spotless Mind, Carrey finally stopped using his rubbery features like a squash ball to bounce against our heads and instead melted like tree sap. It’s a remarkably ego-free performance for someone who was, at the time, one of the biggest movie stars in the world. Can you imagine, I dunno, Tom Cruise ever playing a guy who wasn’t used to winning? But that’s the thing about dudes with epic shtick: It always has to be hiding something. And when that hidden stuff is brought to the surface, it can be pretty devastating.