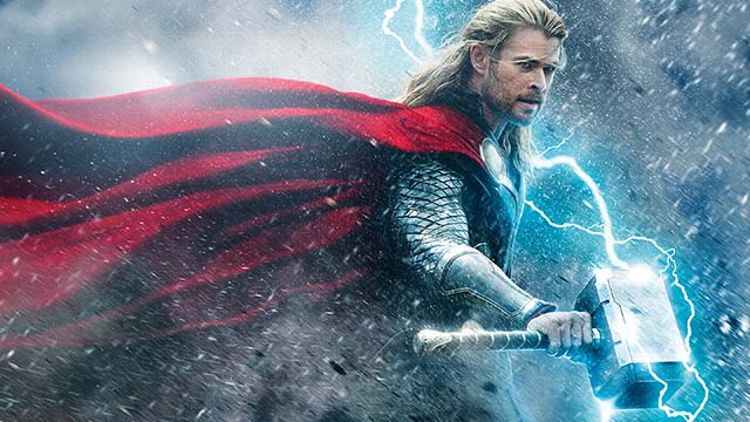 Thor: The Dark World hits theaters this Friday, which means it’s a big week for hammers, and the perfect opportunity for us all to take a moment and celebrate the majesty of this noble toolbox stalwart.

Chris Ryan: Do you guys think it’s weird that every time I need to use a hammer I feel compelled to ask the closest person to raise their hand if their blood type is AB? Do you think that’s why nobody ever wants to watch me use a hammer? Technically this scene from Oldboy only features a hammer for the first half of the scene, but the fight is finished with fists, and fists are really nature’s hammers when you think about it.

Zach Dionne: Paul McCartney, in the Let It Be documentary and the final gasp of the Beatles’ ability to function as a group, struggles to get any of his bandmates as excited about this song as they are about their cigarettes. Eventually I found this Lennon quote in a wonderful book I’ve got, a 190-page version of an interview Playboy originally ran at 20,000 words. It explains a lot: “That’s Paul’s [song]. I hate it. ‘Cause all I remember is the track — he made us do it a hundred million times. He did everything to make it into a single and it never was and it never could’ve been, but he put guitar licks on it and he had somebody hitting iron pieces and we spent more money on that song than any of them in the whole album. I think.”

Andy Greenwald: I have absolutely no idea what this song means — didn’t in 1995, don’t now — but I could absolutely picture an alternate reality in which the Deal twins traded in the rock-and-roll lifestyle for the more prosaic charms of carpentry. The two could open a small shop somewhere in downtown Akron, “bang it all day” as they sing in the verse, and then hang it up in the evening to retire to a local watering hole for a cannonball or three. (That’s the local cocktail I’ve invented for this fantasy. It’s two parts whiskey to one part distortion. Garnish with regret and the inevitable passage of time. Serve warm.)

netw3rk: It took several years, back in the 1990s, before I realized that the blubbering, ungainly, olive-drab fatty-turned-bully-induced-psycho from Full Metal Jacket was played by the same actor as the chiseled, golden-tressed, Thor-alike from Adventures in Babysitting. These were the days before IMDb, after all, when people had to learn to live, somehow, with an inability to instantly clarify some questionable piece of pop-culture arcana. We were practically savages in those days, prisoners to any manner of bizarre rumor. Anyway, Vincent D’Onofrio — whom you probably recognize from one of the non–Ice-T Law & Order programs — played both characters, gaining a reputed Hollywood-record 70 pounds for the Pyle role, then shedding the jiggly flotsam in only three months so he could take on Adventures in Babysitting. Think about it: He went from a guy who would possibly need to buy two tickets for an airplane seat to credibly playing a character that a child might mistake for Thor’s alter ego in just three months. The only problem is, everyone knows Thor’s secret identity is the hobbled Dr. Donald Blake, so obviously this little girl is an idiot.

Mark Lisanti: Sledge Hammer! was a thing that actually existed on prime-time network television — specifically on ABC — for two seasons, beginning in 1986. (1986 was an interesting time. Or was it?) Think Dirty Harry with a weeping head wound, or Hunter going through a rough patch, or Frank Drebin driven to madness by his association with O.J. Simpson. He was a cop. He talked to his gun. He reassured everyone he knew what he was doing, though, in truth, he did not know what he was doing.

The Peter Gabriel association was coincidental. (I told you 1986 was an interesting time. Or was it?)

That’s enough talk. I must now return to the Sledge Hammer! YouTube hole, never to emerge. Hey, watch out, sniper!

Rembert Browne: Any 11-minute music video that begins with James Brown as a flame-throwing oracle, centers around a plot to retrieve Michael Jackson’s glove, involves eight minutes of the hardest dancing ever filmed, and features cameos by Jose Canseco, Isiah Thomas, Kirby Puckett, Jerry Rice, Rickey Henderson, Deion Sanders, Andre Rison, Chris Mullin, David Robinson, and the Dallas Cowboys and Atlanta Falcons cheerleaders is a music video that deserves to be discussed on a daily basis.

We as a society have failed you, “2 Legit 2 Quit” Extended Video. Hopefully today begins the healing process.

Hammer was a founding member of John McLaughlin’s Mahavishnu Orchestra in the ’70s, played keys on “Hard Woman” from Mick Jagger’s She’s the Boss, cut a couple of albums with Journey’s Neal Schon, and scored the Czech film The Incredibly Sad Princess. He booked the gig that would divert him from the jazz-rock session-dude track after playing Vice producer and card-carrying Tangerine Dream fan Michael Mann just one piece from his demo tape, a propulsive duet for drum machine and wailing guitar-synth which Mann immediately elected to use as the show’s theme song. “Miami Vice Theme” went to no. 1 on the Billboard Hot 100 in 1985; it’s the last instrumental and the last TV theme song to accomplish that particular feat. But when I’m brooding and unshaven and staring out at the sunset over the harbor from the deck of my houseboat and/or piloting a speedboat into international waters to intercept a shipment of rocket launchers earmarked for the cartel, I reach for the moodier, more Drive-soundtrack-anticipating “Crockett’s Theme,” on which Hammer’s ax weeps pastel tears for every cop who ever got married to the game.

Tess Lynch: A person named Shannon Hammer dressed her snake up in a tiny hat and mustache (affixed with peanut butter), so I think she has obviously earned her place among these other fine hammers you see here.

Amos Barshad: In 1999 I saw a semi-obscure New Hampshire beard-rock band called Scissorfight play Hempfest in Boston, Massachusetts. I bought their album, “Guaranteed Kill.” I listened to its hit single, “Planet of Ass,” about a hundred times. And now, all these years later, I get to provide them with the kind of media attention they deserve; it’s all been leading up to this moment right here. I’m not fucking around. I put the hammer down.

Katie Baker: Here is 2011 National Hammer Dulcimer Champion Tim Simek with some stylings for your Wednesday afternoon. (I also enjoyed his performance of “Unchained Melody” from “the Spring 2011 quilt festival in Pigeon Forge, Tennessee.” Simek first learned to play the soothing instrument when he got a summer job at Dollywood in the mid-’80s. I eagerly await this biopic.

Armie Hammer as Tyler and Cameron Winklevoss in The Social Network

Emily Yoshida: I like Armie Hammer as the new Taylor Kitsch, because you can’t really worry about Armie Hammer if his movies flop. He’s a Hammer! You know, the oil Hammers? Hammer may be L.A. old money, but he frequently challenges himself by taking East Coast old-money roles, most notably as the brothers Winklevoss in Defining Filmic Document of our Time The Social Network. There’s something delightfully Dr. Manhattany about having two Wasp God Hammers swaggering and regatta-ing with their digitally composited perfect bodies. And my god — the Sorkinisms! Not nearly enough was made of Hammer’s impeccably throaty handling of Aaron Sorkin’s dialogue. When The Newsroom gets renewed, I fully expect the announcement to be paired with the news that Hammer will be brought on as a series regular. Perhaps as Chet VanDerChisel, a petroleum heir whose torrid affair with Leona Lewis creates a conflict of interest for the ACN team? HireMeSorkin.com, amirite?

Patricia Lee: Hey, it’s not every day that someone gets to frame a gold record at his house.

O Brother, Where Art Thou?

Charlie Pierce: I have heard many similes for calling someone dumb. “A box of rocks” is one. So is “a sack of hair.” (The strangest one was “dumber than a sheep alone in a field.” I still don’t know what in hell that means.) But this was a new one on me, and George Clooney’s delivery, as well as the surrounding dialogue concerning both eschatological speculations and hair pomade make it definitive. Clooney musters up a smile here that turns the whole scene inside out; he is the joke, but he’s in on the joke, and so are we.

Meanwhile, why is a sheep alone in a field dumber than any other sheep?

Sean McIndoe: Did you hear that a Philadelphia Flyer player got into a fight this week? It was awful. You’ve probably even read the various pearl-clutching takes from those who believe the NHL has well and truly lost its way

If only teams like the Flyers could go back to how things were a generation ago:

Teaser Trailer: Jeremy Piven Reveals Precise Number of 'Hug It Out, Bitches' to Be Featured in Entourage Movie!