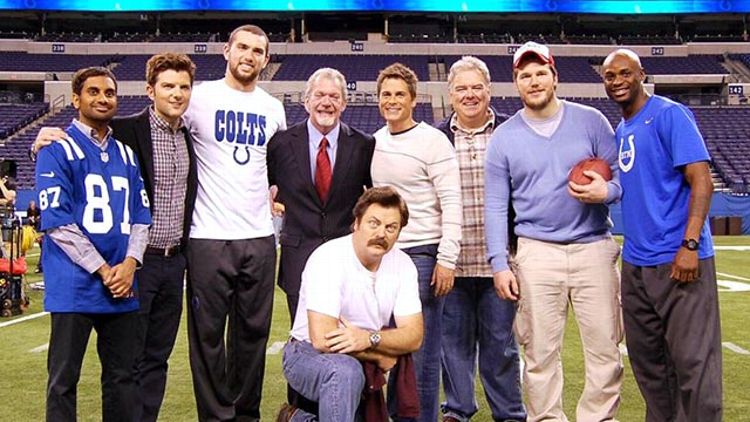 Football season starts this week, and we here at Hollywood Prospectus are very excited about it! To help spread the word about this cool sport, we decided to highlight some of its biggest stars’ most shining moments off the field and under the bright lights of showbiz. Because whether it’s a charmingly self-aware sitcom cameo or a sincere dramatic performance, nothing steals a scene like a giant human trained to run into other humans for a living.

Holly Anderson: We don’t expect much from star athletes on camera in non-game settings, which is what makes Peyton Manning’s tour de force performance in this SNL United Way spoof so special. Here’s his secret: He’s not acting. Do you honestly think he got through this rehearsal period and taping without GODDAMNIT DONALDing a small child? Leadership doesn’t take a day off. This isn’t a knock on his management style; the results speak for themselves: The sketch kills, and those moppets are gonna be the undisputed goddamn cake walk champions of their next elementary school bake sale.

Antonio Gates on The League

Mark Lisanti: It’s almost cheating to pick a clip from The League because of the sheer volume of cameos, but you know what? I don’t care. The NFL’s enhanced-cameo testing program is a joke, so I’m going to do what I need to stay competitive. Here’s Antonio Gates in a hot tub with Ruxin. Standard-issue player drop-in, right? Not so fast: The hotel where they shot this wouldn’t turn off the heat during filming, so it was “cooking his insides” to get the footage. Tight end sous-vide. Some guys are just more dedicated to their craft than others.

netw3rk: Man, look at this mess. Bunch of ponytailed thugs all up in the Kroger, shooting up the joint. Again. All you Millenials: This is what huge swaths of America looked like in the late ’80s, before The Boz gentrified it by his damn self, like Billy Ray Cyrus crossed with Paul Bunyan. A once great nation awash in greasy haired criminals, most of them roadies for glam metal bands, roaming the countryside between gigs in search of $80 cash register scores and Sudafed. I mean, this is no way to rob a place, guys. If you’re gonna empty your submachine gun into foodstuff, try the soda aisle. That was the problem with thug trash back then; no creativity. Goddamn savages.

Enter The Boz, tresses blown back ’cause dude was born on the back of a Harley, spilling down the back of his muscled neck like amber waves of grain. Once upon a time that hair stared down the great Barry Switzer. Left old Barry muttering, half-mad, wandering in a field off Highway 51. Such was the power of The Boz. The Boz was forced to quit pro football in ’89 because, according to his doctor, he had “the shoulders of a 60-year-old.” See how your shoulders feel with the weight of the nation’s hopes and dreams resting on them, Doc. Heavy is the hair that crowns the Boz. And anyway, it was for the best. Boz the football player was done; Boz the actor will live forever. There’s a reason Duke Nukem doesn’t look like Joe Montana.

Mallory Rubin: The gang’s visit to Lucas Oil Stadium is the perfect microcosm of the entire bachelor party medley episode, showcasing each character’s quirks and traits. Owner Jim Irsay, wide receiver Reggie Wayne, and then-rookie quarterback Andrew Luck (bonus points for the sheer volume of Colt cameo star power, Parks team) are there to help give Andy the bachelor party of his dreams, and they admirably play off the characters while adding some flair of their own. It feels like Irsay viewed this as a de facto audition tape for his inevitable future foray into TV color commentary: He’s got slicked-back hair, a baller suit, and the kind of greasy delivery that would surely earn him a Salesman of the Month honor or two at the nearest Indy car dealership. And he knows just how to handle Andy: by calling him “friend,” telling him he’s big enough to play football, and reminding him that the whole place — cue wide-armed gesture! — is his in that moment. Wayne doesn’t seem nearly as comfortable as Irsay, but the receiver still earns points for channeling the viewership’s general feeling about Andy: “That’s weird — but I respect that.”

But Luck wins the day. And he does it in the only way anyone on Parks can: by making fun of Jerry. “I’m a big fan, Mr. Luck,” Jerry says, a smile on his face and earnest intentions in his heart. Luck’s reply? “OK guy, settle down.” Leslie would say this. Andy would say this. April would say this (though she’d definitely also call Jerry stupid and tell him to stop farting). It’s a genuine Parks moment. But wait, there’s more: Luck actually throws a football! To Andy! Who catches it, in the corner of the end zone, for a bachelor party victory touchdown! Andy cheers. Luck cheers. Everybody cheers.

And then, after the cameras cut away, Luck makes fun of Jerry for cheering too loud, for too long. Maybe. Probably.

Andrew Sharp: There are lots of horrible movies I loved as an 11-year-old that make me look back and wince. Celtic Pride is not one of those movies. Daniel Stern and Dan Aykroyd kidnap Damon Wayans before Game 7 after Larry Bird inspires them to take action; it features music from both the Quad City DJ’s and Wild Cherry; Shooter McGavin is an NBA coach; all kinds of excellent Louis Scott commercials … Celtic Pride is still great and I don’t care what anyone says.

Did you know it is one of Judd Apatow’s first movies?

It is one of Judd Apatow’s best movies.

And sure, it’s definitely better for everyone that the final scene with Deion Sanders didn’t actually lead to a football sequel. But for the record: I would’ve watched and probably loved that, too. Fuck the haters.

Bryan Curtis: We could have more snarky fun with “Hip Hop Jerry,” the year-old Papa John’s ad that features Jerry Jones rapping. (“Rapping” defined here as speaking stilted phrases in an ABCB rhyme scheme.) But let’s not do that. “Hip Hop Jerry” got so much attention last August that it became a post-ironic triumph of marketing. Just watching it makes me want to order the John’s Favorite, thin crust …

Let’s talk about why Jones did this. There are a lot of admirable things about the guy. He spends money. He is not a league man. He wants to win very badly, even if he doesn’t always know how to win. As he revealed last week, he has the brain of a 40-year-old.

But the thing that separates Jones from just about every NFL owner is that he really wants to be famous. “Famous” defined here as the kind of media omnipresence that Donald Trump craves. Jones cannot be embarrassed because embarrassment, in a national ad campaign, represents a kind of success. When they asked Jones if he would rap in a TV commercial, he is the one owner who replied, “Absolutely.”

Bubba Smith on Married With Children

Sean McIndoe: Married With Children was basically the Kurt Warner of sitcoms. An inauspicious rookie year. More than a few seasons that were unremarkable or even just plain bad, especially toward the end. But it also had an unexpected peak that, as short as it was, can absolutely hold its own against the best work of any other legend you care to name — at its best, Married With Children was right up there with Seinfeld or Cheers or whatever show it is that you like. Don’t try to argue with me, because I will fight you about this. It’s going to be easier for everyone if you just let me have this one. We’re cool, right? Good. Mizzoozzoo.

The show was also one of the first to really exploit the possibilities of athlete cameos, including Sugar Ray Leonard, Clyde Drexler, Mike Piazza, and, of course, King Kong Bundy. Or, in the case of a 1991 episode from the show’s fifth season, former All-Pro defensive end Bubba Smith, seen here facing off against Al Bundy in an epic slow-motion showdown.

The battle features everything. Biting. Nut-shots. Mother-in-law photos. A Three Stooges tribute. And, finally, a dramatic disputed spot that Andy Reid probably would have challenged and lost.

Smith’s acting career will probably best be remembered by his portrayal of Hightower in the Police Academy series. But in my heart, at least, he’ll always be Spare Tire Dixon.

Lawrence Taylor in Any Given Sunday

Katie Baker: I thought about going with this scene, but this isn’t Grantland After Dark, so let’s stick with a different inspirational performance by LT in Any Given Sunday. The YouTube description says it all: “LT nails this scene most likely because he does not have to act. It is like he is talking to himself.”

Tom Landry’s Hat on The Simpsons