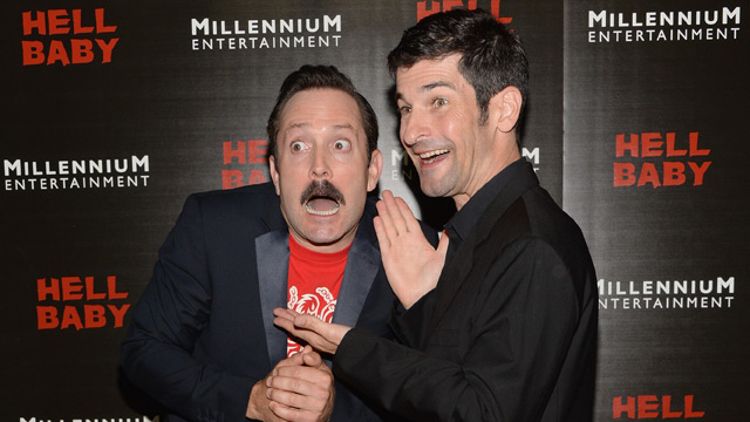 Tom Lennon and Ben Garant may be the luckiest beings on planet Earth. They’ve gone from being two of the comedy wunderkinds behind The State to basic-cable cult gods with Reno: 911! to insanely-well-paid writer-directors whose movies have pulled in $1.4 billion. They even wrote a book about it — How to Write Movies for Fun and Profit — both one of the funniest and most useful books about Hollywood and screenwriting ever. Now, with Hell Baby, a bizarre, twisted, and self-consciously ridiculous riff on the horror genre that premieres September 6 after a run at Sundance, they get to be indie auteurs, too. They call it their most personal film.

OK, fine: They readily acknowledge Hell Baby is “blithering nonsense” while promising it’s pure, 100 percent unfiltered them: Reno fans, this movie’s for you. I recently sat down to talk to them about their inevitable Hell Baby Oscar campaign, writing the new Baywatch movie, and where to get the best po’boys in New Orleans.

So, Hell Baby premiered at the Sundance Film Festival. Am I wrong in thinking Oscar push?

Garant: Obviously. Riki [Lindhome] should get one.

Lennon: Keegan [Michael Key] could actually win an award for this.

Lennon: We should probably push for that.

Click here for all of our interviews with fascinating people from the worlds of sports and pop culture.
Garant: Can you buy a full-page ad in Variety with nudity in it?

Lennon: We’ll find out! Variety hated us, by the way.

Maybe you could send out novelty mailers, like that dead raven?

That would definitely get Academy members’ attention.

Lennon: They have working fax machines. They just don’t know how to change the toner.

Garant: Do they make the toner anymore?

You guys literally wrote the book on writing big studio comedies, but you went indie for this one. Was that a liberating experience?

Lennon: Without a doubt. No studio would approve most of this movie.

Garant: One table read would have killed every line.

Lennon: People would say, “Why do we care about these characters?” And the answer is because they don’t have any pants on.

Garant: Or why do we stop and have sandwiches twice — no, three times.

Actually, I was dying to ask: those po’boys look delicious; is that a real place?

Garant: People fight in New Orleans about what’s the best po’boy and Domilise’s always comes up. It’s the best one I’ve ever had.

Lennon: And he was eating the roast beef ones, which are the thickest they make.

Garant: Just don’t eat seven. I think even they would agree.

Right, six, no problem. But seven …

Lennon: Yeah, that’s a pointless scene. No studio would have said to keep that in.

Lennon: This movie is made up of all scenes that no studio would say, “Oh, keep that pizza salad scene.”

Garant: There’s just been an earthquake in the movie, but let’s stop and talk about pizza salad for two minutes! And casting. It’s the first time we’ve really been allowed to cast whoever we want.

No egos, no agents calling?

Garant: If you pay scale, the agents don’t care. They don’t start pushing people on you. CAA doesn’t demand anything — no one’s got an agenda ’cause it’s scale. “CAA really wants you to have a general with this guy. Wait, it’s scale? Oh, no thanks.”

So what I’m taking away is never pay your actors more than scale.

Lennon: If you can. Although you better be shooting really fast, ’cause you won’t get them for a long time.

Garant: And shoot in New Orleans, where they all want to be.

Was that part of the inspiration for the movie: eat/work in New Orleans?

Lennon: To be fair between August, Bayona, Stella, Sylvain, I think we lost a lot of money. The table read was upstairs at Galatoire’s and no one quite remembers it.

Garant: We were having Sazeracs. Everybody remembers the first course, no one remembers what they had for dessert.

Lennon: And when we started shooting no one remembers anything that we talked about.

Garant: We were showing cast members pictures of themselves, and people were like, “Oh, I don’t remember that.” Rob Corddry took off his shoes —

Lennon: No, Huebel, Huebel was dancing with some weird dude on the street.

Garant: That set the tone for the rest of the movie.

I don’t know why more studios don’t use this system to make movies.

Lennon: Let me tell you why: because the movies turn out to be nonsense.

Is that your tagline?

We need more of those.

Lennon: Finally, we’re taking a stand against that dick!

So are you guys born-again indie filmmakers now?

Lennon: This style of movie is a lot of fun.

Garant: You can’t really afford to do this every time.

Lennon: Well, we can’t keep going to New Orleans to do it. I’m not kidding, you take a whole cast of people out to dinner, suddenly you’re out $2,000.

Garant: We want to do one of these again, we just have to decide.

Lennon: We got to do some tentpoles first. Then we’ll do another weird little movie.

I love that the press notes call this your most personal film.

Garant: We’re really proud of it. What I love about this movie is it’s 100 percent us. If you don’t like it, we disagree. Sometimes, when people don’t like our movies, we’re like, “I’m with you.”

Lennon: This one makes me laugh really hard.

Garant: Which is a good feeling. But it’s not for everyone.

Lennon: It’s got all the funny people I like in it. Doesn’t linger on any scenes I don’t like.

Well, there’s that stoner-van scene. But I found that hilarious.

Lennon: That was a weird scene. Totally pointless, again; absolutely not necessary. It introduces a superfluous character who does nothing.

Garant: And then leaves! There was an improv where Rob Corddry talks about the Hulk for 20 minutes.

Garant: Red Hulk, Gray Hulk. Other planets. We got a nice window into Rob Corddry’s mind.

Lennon: I did not know that dude knew that much about the Hulk. That you don’t need to put in the movie.

Garant: But it was fun to be there for.

Now I kind of want to see that.

Lennon: Well, there’s a certain point where you’re like, “Why not?” Some of the stuff that did make it … Why did we talk about Ashton Kutcher for 10 minutes?

Well, everyone talks about Ashton Kutcher for at least 10 minutes every day.

Lennon: It shows that we’re in touch.

It makes the movie “relevant” for the under-25 demographic.

Garant: They’re all about the Kutch.

Did you guys test-screen this?

Lennon: Heavens, no. I don’t know what you would learn. We did show it four or five times at Sundance. That was useful. We cut a lot of the priests. This movie sustains about exactly the length it is now. If it gets longer, it gets a little tedious. This movie should be a breezy “romp.”

Garant: Test screening is when you want to be a four-quadrant thing, and we know this is not. This is for Reno fans.

Lennon: That’s when you test a movie that is for every living person. This movie is going to bother some people.

I don’t know why that would be.

Have you heard if the Pope likes it?

Lennon: I can’t imagine why he wouldn’t. We point out the devil’s a dick.

Yeah, I was surprised there were no pedophile jokes.

Lennon: No, they are macho, chain-smoking guys.

And very into breasts.

Garant: I think it puts them in a good light.

Lennon: Pope Francis, shoot us a DM if you’re bothered by the film.

So tell me about the Baywatch movie, is it happening?

Garant: They say it is.

Garant: It’s to imply that there will be MANY more.

Garant: They have the final draft. They say they’re making it.

Garant: We never know until we get the invite to the premiere.

Lennon: In fairness, why wouldn’t you make a Baywatch movie? If anything ever fell in the category of “that’s not brain surgery” … Baywatch was at one point watched by like a billion people around the world. You don’t need to speak English to enjoy Baywatch.

Lennon: Well, because people couldn’t Google “jiggling boobies” every second of every day.

Garant: It’s something like one-fifth of every TV in the world was watching it.

Did you guys go back and watch all the episodes?

Lennon: Not every single one.

Garant: You don’t need to watch all of them.

Lennon: You get the gist right away.

Garant: [Cracking up.] One of the plots is a giant squid stealing surfboards.

Lennon: That episode is called “Tentacles: Part 1.” A squid in a cave is stealing surfboards.

Garant: And there’s a ghost!

Lennon: In episode “Coronado del Soul,” Nicole Eggert has a ghost. They go to the Hotel Coronado for a lifeguard competition, and Nicole Eggert keeps seeing this woman who looks like her. Basically, it’s The Shining.

Garant: It’s so much sillier than you remember it. It’s not quite as silly as the Adam West Batman, but it’s close.

Lennon: Mitch Buchannon can like save people’s lives: He gives people stitches and saves an escaped prisoner’s life. He’s basically superman. He’s like Jean Valjean. Everything he did was the right thing to do.

Did you just compare Baywatch to Les Misérables?

Garant: It’s more like A-Team. It’s very aware of its own goofiness. And every time a woman comes in the room —

Lennon: It tilts from her breasts to her pubis.

Last question: I remember last time we talked, you said you have to be either clinically insane or a masochist to want to direct. Do you still feel that way?

Garant: This took a lot of that sting out. This was a great experience. The cast wanted to be there. There was no committee.

Lennon: It didn’t feel like directing a movie. This felt like improvising funny scenes with your best friends.

And that devil baby.

Wait, was it supposed to be animatronic?

Lennon: It was supposed to do way more than it did. We used every usable frame of that baby —

Garant: And some not-so usable ones.

Lennon: I have to put a disclaimer: That was my favorite scene in the movie, when the Hell Baby starts ripping into us. But it’s also … not very good.

What was it supposed to do? What was “your vision?”

Lennon: Just an amazing version of that one that would do good stuff.

Garant: There were three different babies. One of them was supposed to have facial expressions. That one never worked. One of them had a hose and it would spray —

Lennon: It always fucked up the first take and ruined it, so it not only didn’t work, it would set us back two hours.

Garant: It would cover everybody in blood, but the blood came out the neck. And then one of them was supposed to have teeth that “gnashed.”

Lennon: It was an absolute fucking nightmare. It was the last couple days of shooting and we were all caked in blood, up to our necks, crunching blood in our eyeballs. And yet every time that movie comes to that scene, I get so excited!

Lennon: That was practical. But in the green band trailer it’s been turned into a devil tail. In the film, it’s an actual umbilical cord that we’re chasing around the room for a long time and then tries to choke Leslie.

Because that’s going too far.

Garant: That would be bad taste.