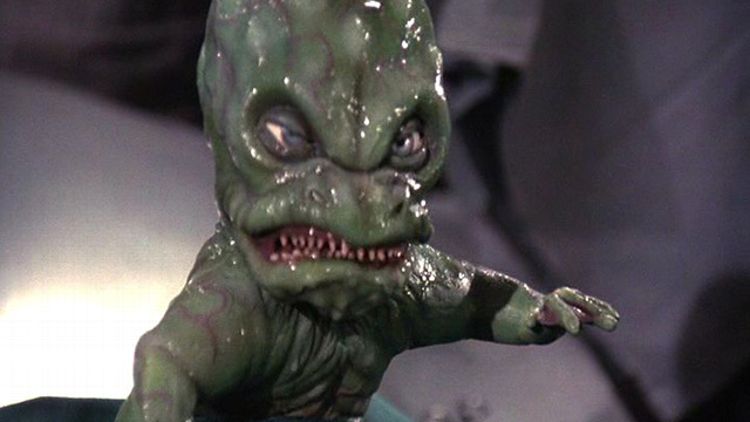 It’s been a big week for babies, and while the royal family and People magazine would have you believe that the most important one in the world was born 48 hours ago, we all know that pop culture is positively bouncing with unforgettable babies — tiny people that nonetheless have the ability to change the course of life as we know it, or our favorite TV shows, or just our worst nightmares, forever. Here are the Grantland staff’s picks for most notable newborns in pop culture.

Steven Hyden: I haven’t rewatched Eraserhead in at least five years, and I’m not sure I ever will again, because I’m a parent now and when you’re a parent there are places in your consciousness you’d rather not visit. Eraserhead is a movie about David Lynch’s deeply personal and intensely realized obsessions — the omnipresence of soulless machines, the dehumanization of modern life, the terror of sexual desire. But above all, for me anyway, it is the most unsettling depiction of parental anxiety that I’ve ever witnessed. Just seeing this 30-second clip — which is a mere prelude to the most mind-blowing sequence in the movie, and perhaps Lynch’s entire career — makes me wonder how I was ever able to have a child post-Eraserhead. This film has the power to mentally sterilize you.

Dan Silver: Detox hallucinations of an animatronic demon baby = Most effective messaging to keep young and impressionable Silver off the smack. (Demon baby starts in earnest at 1:15.)

[If you can’t see the video, turn off the annotations. YouTube is so weird.]

Emily Yoshida: If it weren’t tucked away inside the fourth volume of such an interminable franchise, the whole half-vampire-baby scenario in the Twilight movies would probably be regarded with Eraserhead as one of the most psychologically affecting procreation nightmares in film history. I had given up on trying to see the Twilight movies in theaters out of some sense of pop cultural completist duty after Eclipse, and didn’t get around to watching Breaking Dawn — Part 1 until it was on cable a few months ago. Obviously the entirety of the Twilight “saga” is an abstinence parable, but even reading the Wikipedia synopsis didn’t prepare me for how much it goes there. The message to teenage girls couldn’t be clearer: Don’t have sex until you get married; the first time you have sex you will be hurt by your husband and also get pregnant instantly; babies come to term in about a month and they suck all the life out of you and reduce you to some gray skin stretched over a skeleton; childbirth is the most gruesome, ugly process a person can go through, and it’s what you deserve for having sex; and after your husband chews it out of your womb, your baby will cause a war, but by all means, keep it!

The featurette above is long because a Twihard’s attention span for Twilight-related things is the only known perpetually renewable energy source in the universe, but the first two minutes or so should give you a good idea of what goes down.

Mark Lisanti: Baby’s Day Out is a 1994 movie about the repeated brutalization of three kidnappers who spend two hours of screen time pursuing the wriggling, poopy-diapered ransom that has escaped their grasp. Its cast included Joe Mantegna, Lara Flynn Boyle, and Joey Pants. This is where you would normally place something like this (!!!) to express shock at the quality of the talent in a movie about chasing a baby and getting stomped in the crotch, but I’m reserving the (!!!) for the above clip, because someone has taken the time to erect a video tribute to Baby Bink and the shocking violence he inflicted upon his dogged, if bumbling, pursuers.

Or maybe I’ll deploy the (!!!) here as I slowly remember how entertaining this movie was. It’s Home Alone 2: Lost in New York with a toddler; it’s not a knockoff, it’s an upgrade. Home Alone 2 looks like garbage now. I hate Home Alone 2. How did we ever tolerate Home Alone 2 after we got Baby’s Day Out?

netw3rk: An abridged history of the royal baby: A thousand years ago a dude killed some people and took their stuff, becoming rich. Then, this week, his offspring had a baby whose poops are worth more than your house and everything found therein. The English royal family is kind of like the cultural version of your appendix. It’s there, it doesn’t really do anything anymore, but it’s too deeply rooted to consider abandoning unless it was actually threatening to kill you. So let us turn away from earthly affairs and the vestigial hierarchical structures of the old world, and consider a literally universal baby experience: Dr. Dave Bowman flying through a monolith stargate, where he is transformed into a galactic baby of pure energy the size of the planet Earth. Best. Baby. Ever.

Andy Greenwald: What, you thought I was going to choose something sweet and sentimental? One of the hallmarks of growing up in the ’80s was the way stray bits of adult pop culture filtered down to the playground with all the solemnity of Moses carrying the tablets from the mountaintop. Everyone has a story about how the hoverboards from Back to the Future Part II were actually real and sitting in a warehouse somewhere because the government (sheez! Those guys!) deemed them unsafe. But am I the only one who believed the circa 1985 playground chatter about an imminent fourth Star Wars movie called Return of the Rebels? (I am? Because it made no sense? Because the rebels won in the third movie, thus ceasing to be rebels? OK. You got me.) Anyway, I remember hearing about some scary TV movie sometime around 1984 in which a woman gave birth to a lizard, and the image was so imprinted in my tiny brain pan that when I finally saw the thing a dozen years later it didn’t matter in the slightest that the effects were sub-Corman and the baby actually looked like an unthreatening Cabbage Patch version of Greedo. The point is that childhood fears linger. Also, don’t have sex with aliens because look what happens.

Brian Phillips: This baby is such an asshole.

Tara Ariano: In the middle of a (pretty great) sketch about toxic stage parents, David (David Cross) comments on the mistakes he doesn’t want to make with his and Bob’s talented tap-dancing daughter — namely, not to make her fight for attention the way his own jealous mother did with him. Cut to a flashback in which David’s mother (Mary Lynn Rajskub) bitterly tries to pull focus away from her newborn son. (“I can drool better than a dumb baby” is a line I have adapted and used frequently since our household added a dog.)

​
Katie Baker: The 1987 Nancy Meyers masterpiece Baby Boom holds up impeccably today. Yuppies exist unchanged, boardroom and sandbox conversations remain occasionally indistinguishable, and neither nannies nor James Spader can be trusted. Can’t you just see J.C. Wiatt on the cover of the latest “Can Women Have It All?” issue of The Atlantic? Baby Elizabeth turns in the most realistic baby performance of our time.

Charles P. Pierce: Outside of Stephen Boyd making goo-goo eyes at Charlton Heston, and Heston being completely oblivious to the fact, the greatest thing about Ben-Hur is that it never makes up its mind whether it’s a biblical epic, a sweat-soaked gladiator movie, or a romantic action thriller. Which is why it remains very cool that the movie begins with the birth of baby Jesus, the arrival of the Magi, a Star of Bethlehem that looks like the traffic helicopter from a Judean radio station, and a blast of the shofar that echoes into the main titles. William Wyler frames the scenes beautifully; watch for the calf chasing its mother in the foreground in one shot. Baby Jesus himself is portrayed by a ball of light in his mother’s lap.

Oh, there’s one other great thing. Ben-Hur is at a party thrown in his honor by his adoptive Roman father, and who does he run into but Pontius Pilate, who has just been assigned his new job as procurator of Judea. This, as we know, will not end well for him, and he seems to anticipate that it won’t. “Goats,” sighs Pilate, “and Jehovah.”

Patricia Lee: This is quite possibly Aaron Sorkin at his best. He somehow manages to transform the cynical, sarcastic, tight-lipped Toby into a loving, fawning, soft human being — and it feels completely right. Even 10 years after the episode aired, Toby’s words remain poignant:

You don’t have jobs. You can’t walk or speak the language. You don’t have a dollar in your pockets, but you got yourselves a hat. So everything’s fine.”

Toby, America, The West Wing. Grab some tissues and be prepared to watch this and weep.

Juliet Litman: I’m not sure why a high-quality clip of this dancing CGI baby is hard to find. If Ally McBeal had aired during the Internet era as we know it today, this baby would have become an instant meme with no shortage of animated GIFs. But because this episode of Ally McBeal aired in 1998, this baby was relegated to dancing on a black background on screen savers everywhere, including my family’s computer shortly after this episode aired. Let’s hope Baby Cambridge has moves half as decent as this fake baby.

Tess Lynch: Maggie Simpson, expert marksman and important baby, made her debut on The Tracey Ullman Show along with the rest of the Simpson clan. Back then, in 1987, she was just a sketch of the influential tot she’d become: Later, she’d be the reason Homer had to quit the Bowlarama to resume his work under Mr. Burns at the Springfield Nuclear Power Plant. This past year, she was nominated for an Oscar, making all other babies look like basic baby bitches. She’s so precocious, she even has a nemesis. She’s The Simpsons’ biggest mystery: Is she an evil genius? Will she grow up to out-sax Lisa? When she speaks, will she sound like Elizabeth Taylor (who guest-starred for “Lisa’s First Word”) or James Earl Jones (“Treehouse of Horror V”)? All babies are enigmas, but Maggie is the most elusive of all.