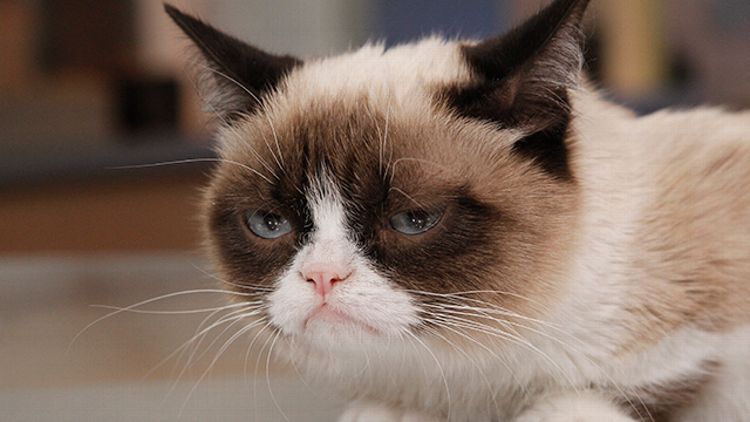 These days, in the fancy salad bars of Hollywood, California, the powers-that-be gripe that bankable movie stars have gone the way of the buffalo. So why not start looking out of the box — and into the litter box? Deadline reports that Grumpy Cat — that king among memes — is getting a major motion picture. Sure. Yeah. Great. Great.

If you’ve been living not only under a rock, but quite possibly inside one, and don’t know about Grumpy Cat, here’s the story: It’s a cat. And it looks very grumpy. And after breaking out in a series of image macros, GC (real name? Tardar Sauce!), has gone international. Deadline has the pertinent information: “[Grumpy Cat] has appeared on such TV shows including Today, Good Morning America, CBS Evening News, Anderson Cooper Live, VH1 Morning Buzz and The Soup … The cat’s official Facebook has more than 930,000 likes and a weekly reach well over 2 million. The official YouTube Channel has over 120,000 subscribers and over 20 million views … Grumpy Cat merchandise sells at Walmart, Hot Topic, Thinkgeek and many other retail stores.” And now, here comes the movie. Produced by Broken Road’s Todd Garner (who has credits on such films as Paul Blart: Mall Cop and Jack and Jill) in conjunction with Grumpy Cat’s managers, the flick will be a family comedy with a talking cat.

Some will throw their hands in the air in frustration here. “Shut it down! The Internet’s over! Shut it down!,” that sort of thing. But look: What’s the difference between Grumpy Cat working its way from meme-hole to meme-hole, and ’80s stand-up guys humping their set from club to club until landing a development deal? Grumpy Cat’s worked hard, established a recognizable identity, honed it to perfection. I say: Why not a talking Grumpy Cat movie? I say: What took so long? Just get Bill Murray to do the voice, and this thing can’t miss.