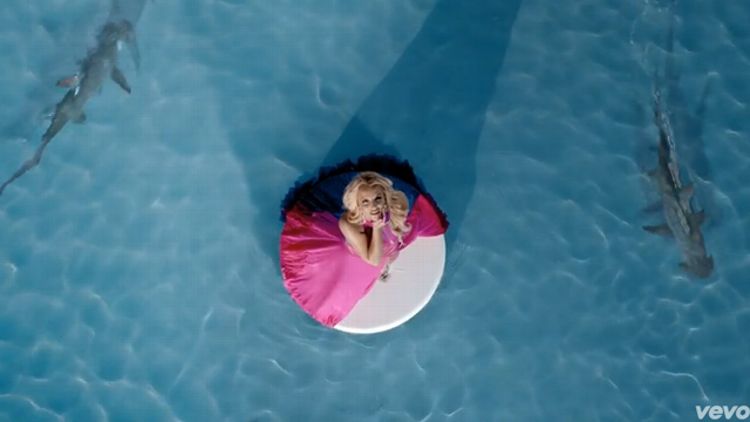 When I was a kid, we’d spend large chunks of summer vacation at my grandparents’ house, where we’d do exactly what we would have done if we were home: watch insane amounts of MTV. As long as we rocked some Gone With the Wind or Sound of Music every once in a while, they were cool with it. Sometimes, my grandpa would even sit in, and that would always end up the same way: him throwing up his hands, unable to make heads nor tails of this manic image stream. It’s not that the music videos, for the most part, looked odd or schizophrenic or indecipherable; it’s that they didn’t look like anything. And every once in a while, I try to remember that: that I didn’t, as a child, just naturally accept that billions of jump-cuts a minute was a normal way of doing things; that it’s actually taken decades of conditioning to make anything short of Battling Seizure Robots look downright plodding.

Which brings us to Britney’s new video, for her new ode-to-the-Protestant-work-ethic jam. As Molly Lambert explained, this new promo campaign is coming along with a “press push that Britney will be dancing again at full capacity.” So how’s she look in motion here? Um, fine?

She certainly commits to the hair-flipping and arm-jutting. Once the actual choreography kicks in, we are perhaps not at absolute peak optimization. And there’s also one moment, where Britney sort of sadly wavers between walls, that could have used a dash or two of (original recipe, not rereleased) Four Loko. From the Bugatti doing doughnuts in the desert, to the poor woman gagging on the Beats speaker locked into her jaw, to the sharks (sans laser beams on their heads), there’s certainly enough to pep it all up. That said, if you wanna move away from directly focusing on Ms. Spears’s movements, I can’t help but think that the true solution, as it has been since MTV time immemorial, is to just cut faster. Always. Cut. Faster. Remember: We’ve been trained. We can take it.