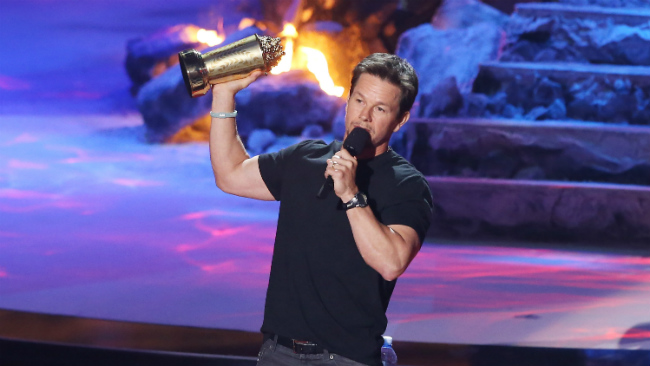 It’s all there in the golden popcorn trophy: The MTV Movie Awards are not a serious event where serious people give and receive serious accolades. Music Television’s annual movie party gave its first Lifetime Achievement Award to Jason Voorhees in 1992. One time somebody won Best Sandwich. Previous Movie of the Year winners include Napoleon Dynamite, four of the five Twilight films, and the second Pirates of the Caribbean.

MTV’s attitude has always been, very transparently, Now that Real Awards Season is behind us, mind if we give out some even more meaningless trophies and plug most of the big summer movies and lather attention on the latest box office juggernaut that appeals to the teen demo? Year after year, we respond with a beleaguered Yeah, sure. And somehow this year still managed to set a new world record for most famous people simultaneously refusing to care about something. Let’s take a look.

14. CHRIS PRATT. Walked onstage without a mic, confirming that this was going to be that kind of show. 13. AMANDA SEYFRIED. At the very top of the festivities, giggled through her teleprompter bit and sorta-not-really apologized for leaving her contact lenses at home, nbd, lol.

12. WHOEVER SAID YES to a stage that looked like a half-drawn Prince symbol and a set that resembled like a fiery hellscape. Was there any method to the madness, other than an elaborate setup for host Conan O’Brien to call the show the “Satanic Cult Awards” and freak out a few easily freaked-out parents? … and didn’t seem especially thrilled about this.

8. WHOEVER THOUGHT THIS WAS A GOOD IDEA. 7. MARK WAHLBERG. “This is serious. Everybody’s gotta be quiet,” Marky Mark admonished when he hit the stage to accept the Generation Award/the self-proclaimed “You’re Too Old to Come Back Award.” And as nice as it is to get a preassigned award, you also have to sit in the front row all night. You cannot pretend to have fun for that long. 6. WHOEVER SAID YES to putting a helpless cat (Grumpy Cat, of meme fame) in the front row of a packed theater, with a camera in her face. Even if she was only there for a few minutes: dick move, guys.

5. JONAH HILL. Turned Channing Tatum’s Trailblazer Award into even more of a big joke — “What’s a more trailblazing experience than a fucking gorgeous man becoming a movie star?” — but also thanked a lot of actual people when he got his Best Comedic Performance Award. Never looked especially happy in the audience, either. 2. CONAN O’BRIEN. It made sense Coco would make light of the MTV gig on his own TBS show, but why show up, clearly taking the money, and proceed to carve out a mean-spirited, I’m better than this shit path for the rest of the night’s celebs to follow? The weird mention of how he said he’d do the show only if he had complete creative control — and our collective lack of clarity as to whether that was true or not — was the zenith of the awkwardness.

And five people who actually made something of the night:

5. JARED LETO. Finally found his place to talk at length about one of the many causes he’s passionate about.

4. ORLANDO BLOOM. So psyched to say he got “a kickass award … FROM KICK-ASS!!” (Aaron Taylor-Johnson.)

2. JOSH HUTCHERSON. One of the only people smart enough to thank MTV (unspoken: for all the free Catching Fire publicity) rather than act cooler than the show. Also offered a quick and tasteful remembrance of Philip Seymour Hoffman.

"When we analyze the structures he painted, it appears Ross preferred the simple to the elaborate. He painted 69 cabins, 25 fences in various states of disrepair and 17 barns. More complex man-made structures are remarkably rare in his work. Bridges appear only seven times. Boats and mills, twice each. Ross painted one dock, one lighthouse and one windmill over his 381 episodes." -- A Statistical Analysis of the Work of Bob Ross