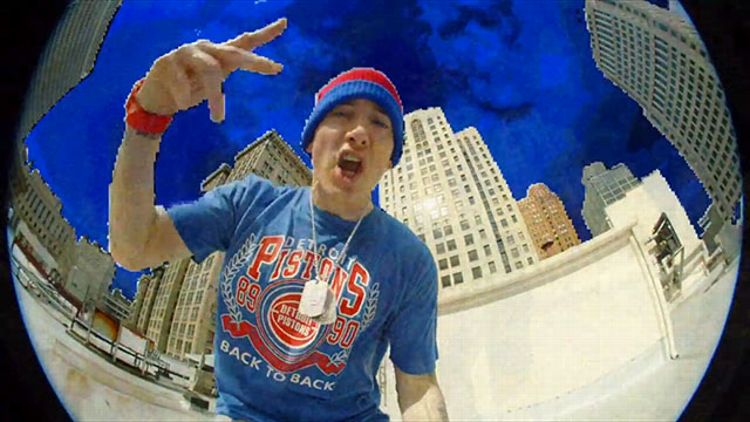 On Monday, Eminem dropped the video for “Berzerk,” the first single off Marshall Mathers LP 2, and made his recent Beastie Boys homages more overt. On the track, he does his best Ad-Rock, nabbing the “kick it!” from “Fight for Your Right” as a vocal period; he also has Rick Rubin serve up a juicy building-block riff-rock sample, the kind the Beasties crushed toward world domination on Licensed to Ill. In the clip, he just goes ahead and dresses up like a Beastie. After a quick flash of the Raising Hell tour T-shirt, we see Eminem channeling Mike D’s outfit from “So What’cha Want,” swapping out the Knicks ringer for a Pistons championship tee.

So, what does it mean for the album?

As even the casual Slim Watcher could tell you, it’s long been this man’s M.O. to kick his albums off with a goofy, fun-lovin’, radio-targetin’ lead single that only winkingly, obliquely touches on all the heavy shit to come.

The paragon here is “My Name Is,” one of the greatest introductions in the history of pop music. Over that lumbering Labi Siffre bass line, Eminem presented his cracked Slim Shady persona — a self-loathing, drug-damaged, lonely horndog with daddy and mommy issues — and begged us to laugh at him. The Marshall Mathers LP’s “The Real Slim Shady” was grating and inescapable, but also an honest nod to his post-fame identity crisis. The Eminem Show‘s “Without Me” was our dude at peace with his place in the pop firmament (dressing up like Elvis, like Bin Laden, like Moby … ). By Encore‘s “Just Lose It,” though, he’s tapped out. A major gag is Eminem projectile vomiting on himself, dressed as Michael Jackson; another is EmJ crawling through legs on the dance floor to try to locate his missing nose. And halfway through the third verse he actually just goes, “tubba tubba tubba / I don’t have any lines to go right here.”

All of which is to say: Chalking up the retro “Berzerk” as little more than Em swapping out his stale celebrity bashings in favor of a different kind of sprightly leadoff jaunt certainly seems to make sense.

Before he was a barefoot, bearded hit-whisperer mystic, Rick Rubin was a wholly other music industry archetype: the hustler. In the early ’80s, when he first met the Beasties, Rubin was just a kid from Long Island working 18-hour days — throwing wet T-shirt parties at the NYU dorms, powwowing with downtown so-and-sos at Danceteria — trying to make it in New York City. Check out the early promo shots, and see Rubin mean-mugging right alongside the fresh-faced wunderkinds. Once they left Def Jam and shacked up in L.A. without him, Rubin, perhaps a bit scarred by the whole experience, retreated from the limelight. And it’s just recently, after decades as the most recognizable producer in the industry, that he’s found his way back in.

Jay Z used him as a prop — as the sage on the couch in the cell phone commercial — and he was potent in the role. Kanye let him shape Yeezus in the fourth quarter, and he was even better. Now Eminem has tapped for him for both roles: He stands stoic in the “Berzerk” video; he’s also executive producing MMLP2.

The last time Rubin so faithfully rehashed his ’80s self for a rap titan, it was Jay’s “99 Problems,” and the sample was from the fertile crescent that is Billy Squier’s “Big Beat.” This time, Rubin took a chunk out of Squier’s “The Stroke,” and lets Eminem wax nostalgic: “Now this shit’s about to kick off, this party looks wack / let’s take it back to straight hip-hop, and start it from scratch.”

The “Part Two,” the re-dyed blonde hair: It’s a conscious nod to the classic raw-nerve-ending era. But Eminem has spent years working through his traumas and neuroses, and, by the time of his post-Encore hiatus, seemed spent with them as fodder. When he came back, it was with Relapse, a half-baked return to the horror-rap. But he seemed to find his true latter-day footing with Recovery. Sad to say, that footing was maudlin, drab, and, worst of all, kind of boring.

So now he’s healthy, sober, stable, a happy father to a small brood — what’s next? Maybe some throwback formalism? He is (he was?) an impeccable technical rapper. If he’s plum out of demons to exorcise, why not call up the newly re-omnipresent Rick Rubin and make an ’80s rap record?

OPTION 3: Something in Between