Weird Al’s 14th Studio Album Is His First No. 1 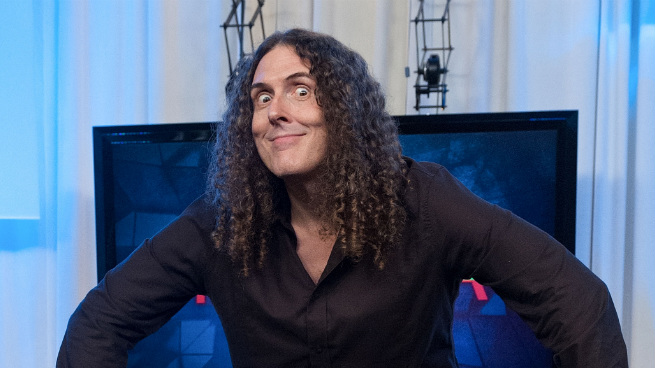 Thirty-one years after releasing his self-titled debut album, “Weird Al” Yankovic’s Mandatory Fun has debuted at no. 1 on the Billboard 200. It’s the first time Al’s gone to the top, and, with 104,000 copies sold, it’s his best week since Soundscan started keeping track of these things in 1991. “In total, Mandatory Fun is the third top 10 album for Yankovic, who previously visited the region with 2006’s Straight Outta Lynwood [no. 10, 73,000 sold] and his last album, 2011’s Alpocalypse [no. 9, 44,000 sold],” Billboard reports. Yankovic edged out Yes!, the fifth studio album by Jason Mraz, by 2,000 copies. Mashable adds that Mandatory Fun has racked up 2.2 million streams on Spotify. Al’s as excited about this as you’d hope:

I’m so pleased everybody is enjoying the album, and I’m enormously grateful for everyone’s support. Thank you, thank you, THANK YOU.

Mandatory Fun isn’t just a hit for Weird Al, though — it’s also the first comedy album to go to no. 1 since 1963, when Allan Sherman released My Son, the Nut. 1994’s The Beavis & Butt-Head Experience was the last comedy album to sell more copies than Mandatory Fun, when the release sold 118,000 copies and went to no. 2.

The numbers seem to defy any narrative painting Weird Al as irrelevant in the YouTube age. Yankovic’s use of the Internet was almost certainly instrumental in propelling Mandatory Fun to no. 1, with eight born-to-go-viral videos being released over eight consecutive days. The campaign launched the day before the album’s release with “Tacky,” a celebrity-studded parody of Pharrell’s “Happy.” “The exposure Yankovic earned via mobile and social networks leaped an astounding 3,391 percent between the weeks of July 7-13 and July 14-20,” the New York Daily News writes. “Foil” — a riff on Lorde’s “Royals” — already has nearly 12 million views, making it one of Yankovic‘s biggest YouTube successes ever. (“Word Crimes,” a grammatical spoof of Robin Thicke’s “Blurred Lines,” has passed the 10 million mark.)

Yankovic recently told Steven Hyden that Mandatory Fun is “probably my last conventional album,” although that shouldn’t be confused for a retirement plan. “Being in the recording industry, you have to get used to change. It’s always changing — the way music is consumed and distributed is always changing,” Yankovic said. “You have to roll with it. I’m trying to see where the zeitgeist takes me.”