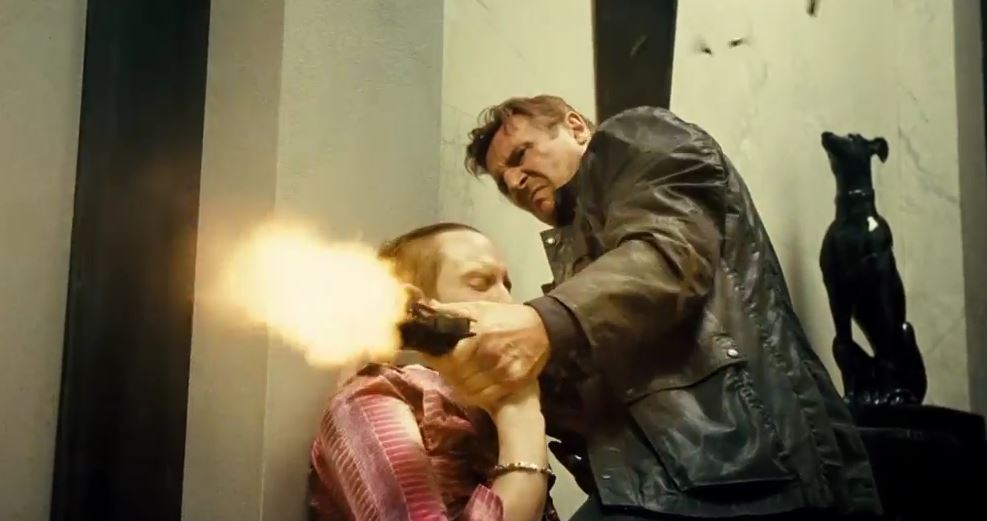 And so it begins. As if to avenge 2014’s puny performance, the box office is going Super Saiyan in 2015 with a murderer’s row of sequels, threequels, and reboots. That’s right, puny mortals: Get ready to empty your checking accounts and dump it all straight into the studios’ gaping, franchise-loving maws. First up: Taken 3. Yes, Liam Neeson led the way this weekend at the multiplex, demolishing prerelease projections and inflicting enough collateral damage on innocent bystanders to qualify for war-criminal status at the Hague. And we ate it up.

That said, the domestic box office actually took a small dip of 5 percent compared with 2014; then again, 2014’s scarce successes came fairly front-loaded into the first quarter of the year. And Neeson may be able to fishtail his car and perfectly clip the front landing gear of a private jet, but even he has to bow down before Frozen and Lone Survivor’s box office fortunes. So, while Hollywood got nice and drunk handing out awards last night, 2015 had already begun its quest to hunt down the moviegoing public and beat the ever-loving profit out of us.

Oh, Liam Neesons. How do we love your righteous ass-kicking? Let me count the ways: $40.4 million opening weekend at the domestic box office, another $51.4 million overseas this weekend, and a total worldwide gross of $91.8 million. Domestically, Taken 3 posted the second-best January opening of all time, right behind Kevin Hart’s Ride Along and just above Cloverfield. That’s all kinds of impressive, considering the threequel cost only $48 million to produce and barely broke 12 percent on the Tomatometer — even lower than Taken 2’s dismal 21 percent. So, it looks like A Walk Among the Tombstones’s stumble may have owed less to Neeson fatigue than to the general miasma of “meh” that enveloped 2014. Good thing for the Thinking Man’s Ass-Kicker, too, since April’s Run All Night stars Neeson as — you guessed it — a lethally protective father who will do whatever it takes to defend his progeny. But this time it’s a son. You know, to change it up a little. If that passes muster, it’s only a matter of time before Hollywood heeds Forbes’s (and our) suggestion for the ultimate sixtysomething action-star extravaganza: Liam vs. Denzel.

On the long list of people whom Neeson handed their lungs this weekend: Bilbo Baggins. Taken 3 didn’t just top The Hobbit for the no. 1 slot at the domestic box office; Neeson kicked The Battle of the Five Armies all the way down to no. 4, after it took in a distinctly un-dragonlike $9.4 million. All of which means Bot5A’s gold mining has stalled a little bit at $236.5 million domestic — and it might not hit the face-maintaining $300 million mark at home, or possibly even the bragging-rights-bestowing $1 billion worldwide mark. Now, we’re not saying The Hobbit’s worldwide gross of $782 million isn’t a huge amount of money by any standard. We just expected a little more from the tiny people with the deep pockets.

Selma went wide this weekend to the tune of $11.2 million from 2,179 theaters. That brings its domestic total to $13.5 million, and it’s sure to keep packing away the dough all through the awards season. And if you’re a seventh to ninth grader in New York City, you can even see the film for free and probably score some extra credit, too. Sweet! (Just try to look up LBJ in the library when you get out of the film).

Inherent Vice also went wider this weekend, earning $2.9 million in 645 theaters in North America — raising its total to $4.48 million, but not quite enough to break the weekend top 10. That also means that when all the joints are smoked, Inherent Vice might be bringing up the rear when it comes to Paul Thomas Anderson’s catalogue (outside of Hard Eight/Sydney). Still, it’s something of a small miracle that a studio as corporate and hegemonic as Warner Bros. made such an eccentric and artistically ambitious film. So, moral victory, yay. Box office victory, nay.

American Sniper remains perched on its lofty box office vantage point, taking kill shots on every weekend record that comes its way. It only dropped only 18 percent, earning $555,000 for a still-stellar per-screen average of $138,750. As Indiewire points out, that gives American Sniper the second-, third-, and fifth-best per-screen averages of all time — behind The Grand Budapest Hotel and with The Master in there at no. 4. That adds up to $3.1 million from only four theaters, and when Sniper goes wide, the sky’s the limit — Forbes thinks it could gross $35 million — and it’s in Imax! Apparently, Sniper’s also breaking records in Italy. Che bello!

And this is really why Hollywood has awards shows: It was a good weekend to be a Golden Globes nominee, probably because it was the weekend of the Golden Globes. Not only did Selma do well as it opened wide, but Into the Woods also took the no. 3 spot with $9.7 million, pushing it over the all-important $100 million mark to a domestic total of $105 million ($120 million worldwide). Wild also passed the $30 million mark, while The Imitation Game, powered by Harvey Weinstein’s ruthless campaign machinery, jumped up to no. 6 at the box office, with $7.6 million for a domestic total of $40.8 million and $72 million worldwide. However, Big Eyes still struggled right out of the top 10, with only $1.3 million. Maybe Amy Adams’s win and Tina Fey’s Emma Stone joke could boost awareness of Tim Burton’s biopic.

'The Right Reasons' Podcast: Breaking Down 'The Bachelor' and 'The Challenge' Premieres