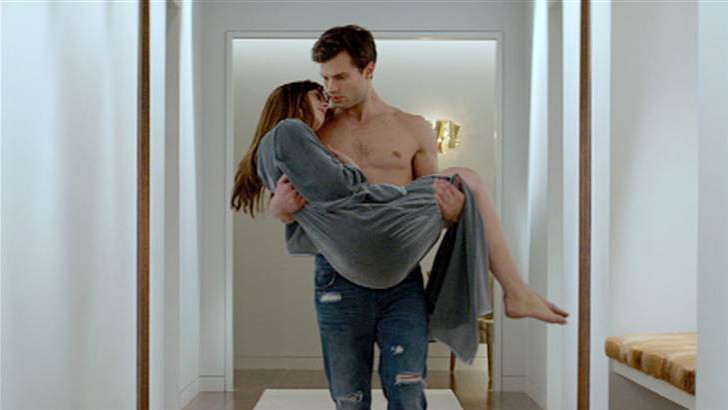 Mornin’, Hollywood. Looking a little rough around the edges there, sunshine. Wild Sunday night out, huh? That Boyhood kid can really hold his champagne. And you see J.K. Simmons fling his Oscar at the VF party buffet, screaming, “Not my tempo!”? Fun times. Except, much like that throb building behind your temples, I’m here to yank you cruelly back to reality. You got to play dress-up, hand out merit badges last night, and talk about “art,” but it’s time to get back to what this is all about: money.

Hollywood’s holy days don’t exactly make for a banner weekend at the box office, but hey, it’s February and this year wasn’t so bad. Spurred by a few brisk flicks of Christian Grey’s riding crop, the domestic box office leapt 4.6 percent over the same Lego-studded weekend last year, to $117 million. That keeps the pace for Hollywood’s bully 2015 — still 10 percent ahead of last year, and we’re only now getting to the heavy hitters. In fact, with the big fashion parade on Hollywood Boulevard over, it’s time to clear those lingering prestige films out of theaters and get back to work making some real cash. But first we’ll pass judgment on those few films that were out on the front lines while everyone else got piss drunk and hate-congratulated those lucky-bastard Oscar winners.

Remember how I said last week that Fifty Shades of Grey could drop like a rock in its second weekend and still pull in fistfuls of cash? Well, Fifty Shades took a freaking skydive at the box office, plummeting 73 percent in its second weekend. The always astute Forbes points out that’s the biggest drop ever for a film with an extra-wide release of more than 3,500 theaters; and it’s only the eighth film to drop 70 percent after opening on more than 3,000 screens. That’s to be expected when your audience expects Cinemax-at–3 a.m. levels of smut and you don’t deliver even HBO-at–10 p.m. titillation. Of course, “plummet” still meant $23.2 million and first place at the domestic box office this weekend. Sure, Fifty Shades probably won’t reach $200 million here, but as always, the rest of the world comes to the rescue. It dropped only 57 percent worldwide, raking in another $68.1 million and pushing its international box office to $280.5 million. So yes, Universal currently has 410 million reasons not to care.

Winners: Big Kev and The DUFF

The freshman class managed to snatch some of the scraps the 1-2-3 films (Fifty Shades, Kingsman: The Secret Service, and The SpongeBob Movie) left on the table, albeit on a modest scale. Kevin Costner managed to turn around his latest box office slide with Disney’s cross-country film McFarland, USA: It made $11.3 million domestic for the no. 4 slot on a $25 million budget. Those numbers don’t scream raging win, but with an A CinemaScore, McFarland shouldn’t swan-dive Shades-style and can keep pulling in the cash. Meanwhile, Lionsgate’s teen comedy The DUFF also managed to lure out the non-fanboy demographic for an $11 million opening weekend, well above expectations and ultimately pretty profitable on a modest $8.5 million budget.

What a difference John Cusack makes: Hot Tub Time Machine 2 earns the dubious distinction of this weekend’s official bomb with a truly pitiful $5.8 million. Perhaps smelling a cynical cash grab (or worse, an incompetent one), Cusack bailed on this one, and the bad reviews sealed the deal. Granted, this second effort cost less than half of the original to make ($14 million), but a C-minus CinemaScore from the few fans of the original who did show up guarantees HTTM 2 will do its own belly-flop high dive next weekend, hit its head on concrete, and disappear into the pool forever.

This being a box office column, I’d get my popcorn bucket revoked if I didn’t point out, as has pretty much everyone else, that this year’s Oscar Best Picture crop didn’t exactly burn up the box office — even with American Sniper’s garbage pails full of money ($428 million worldwide and counting!). To put a face on this fun fact, this year, only American Sniper has grossed more than $100 million domestic, with The Imitation Game the only other BP nominee having any chance of hitting that mark. (This year’s class also has the lowest per-film average in worldwide box office history: $129.2 million.)

But since all eight nominees were small films whose budgets ranged from comparatively modest (Birdman) to almost nonexistent (Whiplash), every single one counts as a financial success — and those nominations mattered. Per Deadline, half the Best Picture nominees made the lion’s share of their cash after the nomination: American Sniper, 99 percent; Selma, 67 percent; The Imitation Game, 49 percent; and Whiplash, 46 percent. Even Birdman earned 33 percent of its box office total post-nomination and should make even more with its win. (Obviously, this doesn’t account for the box office bump a film gets for being considered a “contender” well before nominations are announced in January.)

On the other side of the equation, both Boyhood and The Grand Budapest Hotel had been released unusually early for nominees and didn’t profit at the box office much from the recognition (Boyhood), if at all (Grand Budapest). But they will profit plenty from the post-box-office afterlife that is an Oscar nominee’s true cash cow: pay TV, video on demand, and yes, even Blu-ray. Another fan fact courtesy of Deadline: This year’s Best Picture nominees “stand to make two to three times the amount they generated at the box office in the home entertainment sector.” With our surfeit of viewing options, an Oscar nomination remains one of the few things that will get us to click that “buy” button. So is an Oscar nomination worth the $100 million–plus the studios collectively spend on campaigning? Maybe, but apparently a Golden Globe nomination is worth more. How’s that for a hangover, Academy?