We Went There: Saying Goodbye to ‘Mad Men’ at the Live Read and Finale Screening in Downtown L.A. 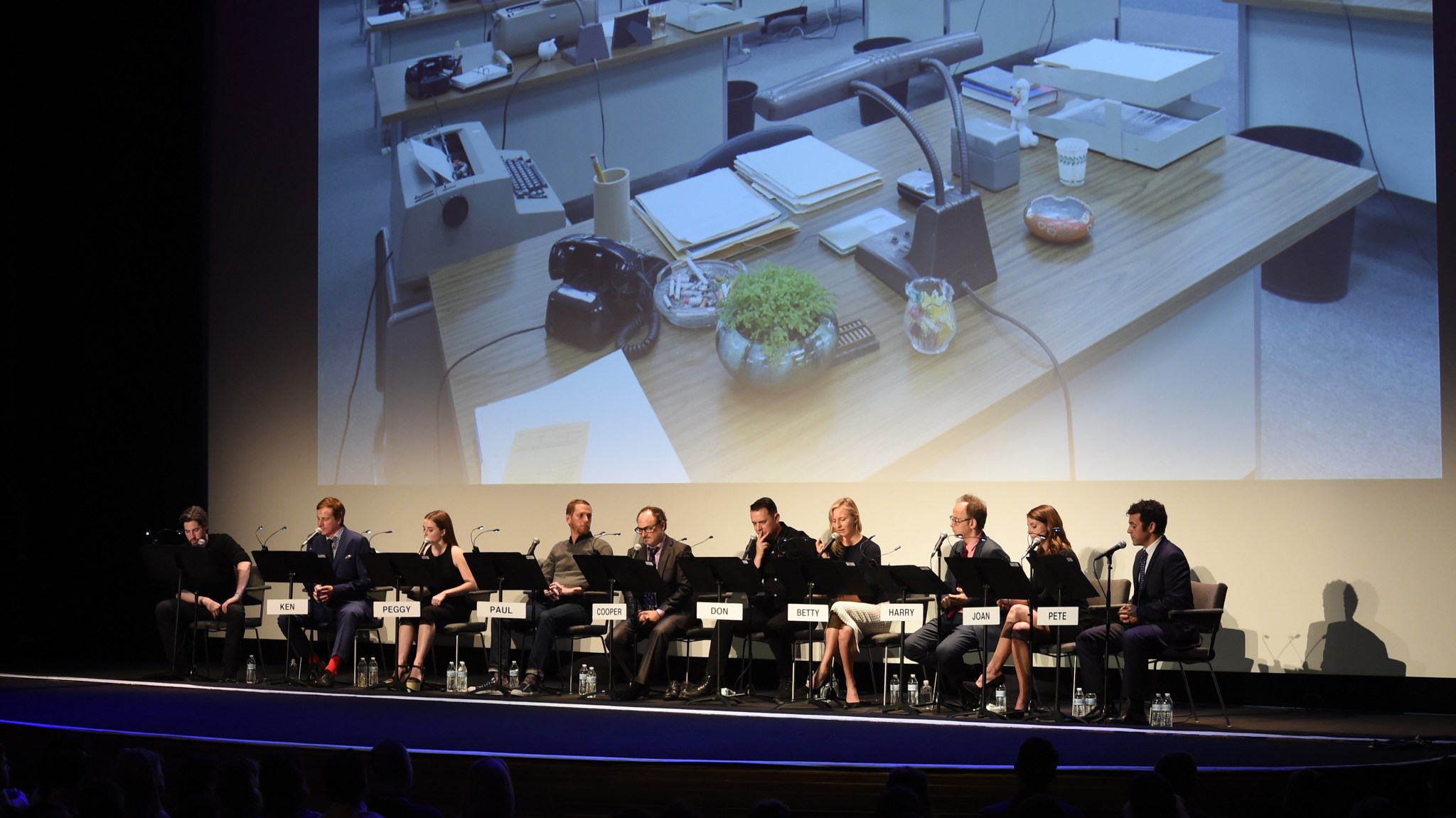 When the curtain finally came tumbling down, I realized I’d probably taken Mad Men for granted for much longer than I care to admit. It’s sad but understandable, almost inevitable: Mad Men achieved the rare status of cultural white noise — always there if you wanted to tune in and easily faded out if you didn’t. But even if you maintained a vigilant eye on the ebb and flow of its dramatic tides, I think the ossifying forces of familiarity masked for us all what a singular show it has always been, even at its lows. Mad Men played gleefully with subtext and character like no other show, simultaneously offering an aspirational fantasy and its antidote, real life. It was the American Dream served with a knowing, necessary dash of fatalism.

Fortunately, Film Independent and AMC let Jason Reitman present the Mad Men Season 1 finale “The Wheel” as one of his live reads before screening the series’ last-ever episode in the Theatre at the ACE Hotel in downtown Los Angeles. Hearing Matthew Weiner’s script reconfigured by Reitman’s cast was just the jolt my spiritual martini shaker needed to really appreciate Mad Men’s slow, drunk stumble into the sunset once more. (Also, it didn’t hurt that the event was flowing with more booze than a Madison Avenue liquid lunch; there haven’t been that many simultaneous martini orders since Ian Fleming’s funeral.) With Weiner and much of the cast in attendance, this was about as generous an environment as you could hope for, every single one of us primed to inject Don Draper’s snake oil straight into our souls.

Not surprisingly, Reitman packed the cast with comedians and sitcom pros: David Wain, Rob Huebel, and Brian Klugman as Harry, Paul Kinsey, and Ken, respectively; Kevin Pollak as both a loopy Bert Cooper and smarmy Duck Phillips; and a wide-eyed Fred Savage as the eternally entitled Pete Campbell. Filling out the native humorists were Mickey Sumner as Betty, Kaitlyn Dever as Peggy, Ashley Greene as Joan, and Colin Hanks as the great Don Draper. Mad Men’s zingers often give the feeling of a three-camera show slowed to half-speed, sans laugh track, and everyone’s feel for timing only emphasized its unique serve-and-retort rhythms. That said, I didn’t envy Hanks’s gig: He had to reach down into whatever black depths he harbors to pull out the needed pathos with Jon Hamm himself in the audience. But he did it, and the alternate cast left me with a deep appreciation for the sheer emotional amperage inherent in the show’s writing. Mad Men has always been a show of small moments that nonetheless pack a prizefighter’s punch. Unlike previous live reads I’ve been to, the cast didn’t really play: The gravitational pull of the material was just too strong, I suppose. But the writing … well, Don’s legendary Kodak Carousel speech lost none of its mythic poetry even without Hamm’s all-conquering chin to sell it. 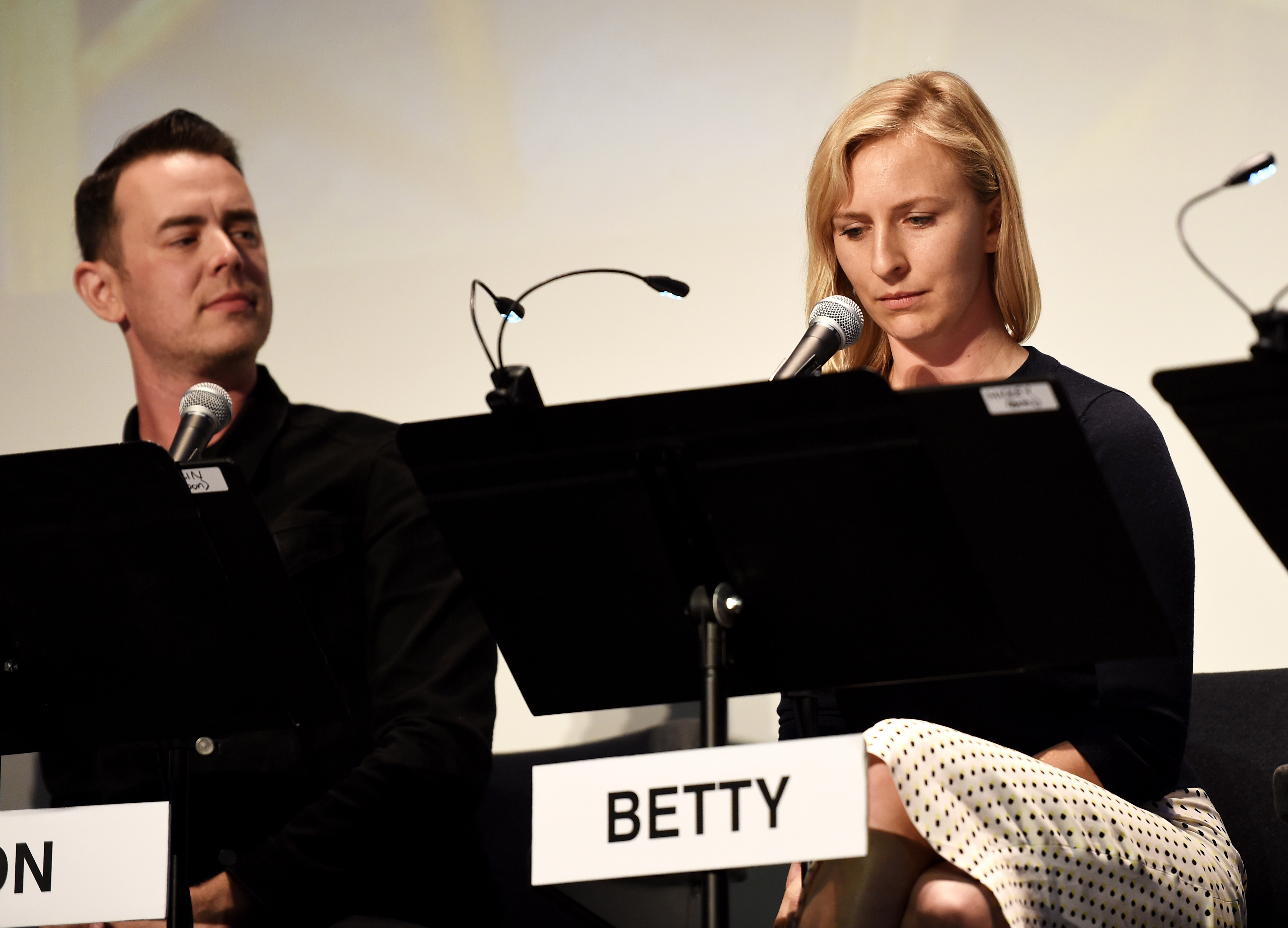 But then came the series finale, “Person to Person.” (Well, it came after some appreciative applause for Reitman and cast, plus two standing ovations for Weiner, a thoroughly soused intermission, and one final onstage curtain call with the original cast minus January Jones and Christina Hendricks.)

Personally, I’m a big believer in the nitrous boost feature films get from a crowded theater. Nothing reveals the limitations of a half-assed product more than half-watching it at home with a pause button, family members or roommates running to the fridge for a snack, and an easily accessible toilet. But TV thrives on the intimacy of the couch. Even when you’re watching it with others around, the comforts of home work in tandem with great writing to seduce your brain. So, saying goodbye to Mad Men in a Gothic revival movie palace was weird enough to begin with — but getting the magic of communal viewing was a true mind warp.

Still, either we were all collectively sloshed off our rockers (distinctly probable) or Weiner knows how to play his audience like an organ grinder’s monkey. (It’s likely both.) Whatever it is, we were a live nerve: laughing on cue, cooing with delight, and, yes, crying. I’ll admit it: I’m a sucker. I tear up at everything from that homeless dude dying in Groundhog Day to City Lights’s iconic ending. But I have never — I stress never — cried for a TV show. Until now, when Don let his unshakable ego and personal-hell-powered drive drop just long enough to whimper “Birdie” to the ex-wife who knew him better than anyone else. Fortunately for my pride, Weiner’s wry humor rocketed us back along the emotional roller coaster as he doled out happy endings for Roger, Peggy, Stan, Joan, and even Pete Campbell on his Learjet to Wichita. (I guess Sally teaching Bobby Draper Serial No. 2235 how not to burn toast counts as happy, too.) But the biggest takeaway from saying goodbye to Mad Men with a theater full of fans is remembering just how funny the show was. Not funny ha-ha or cerebral-logic funny, but a deeply human funny nonetheless. No show on TV has so consistently and so artfully deployed irony in its purest, most satisfying form to entertain, disturb, and connect with us.

Which brings us to that ending. I wouldn’t presume to explain it — plenty of others can far better than me — but I will say in that theater it landed like a precision-guided missile. I almost thought Weiner would fumble in those final moments as he lingered on that too-cute-by-half image of Don chanting “Om.” Oh, me of little faith. The instant those first few bars of music played, I smiled wider than a tap-dancing Bert Cooper. In some ways, it was a more deeply satisfying last shot than Breaking Bad’s, and more fun than The Sopranos’s famous cut to black. Whatever it “meant,” it was quintessential Don Draper — the Holy Fool of Advertising had gone through his own personal hell and back in a Dantean sojourn across America only to end up where he started — and as he peered down into the infinite depths of existential crisis, he pulled out the greatest advertising jingle of the 20th century. What better image of Don to part with than the ironic grin of a man for whom enlightenment and advertising are one in the same.

And to be brutally honest, the first thing I did after I left the theater: I went and bought myself a Coke.

'Mad Men' Series Finale: Where You Drink Champagne and It Tastes Just Like Coca-Cola