We Went There: President Obama Checks Out Denzel Washington and ‘A Raisin in the Sun’ on Broadway 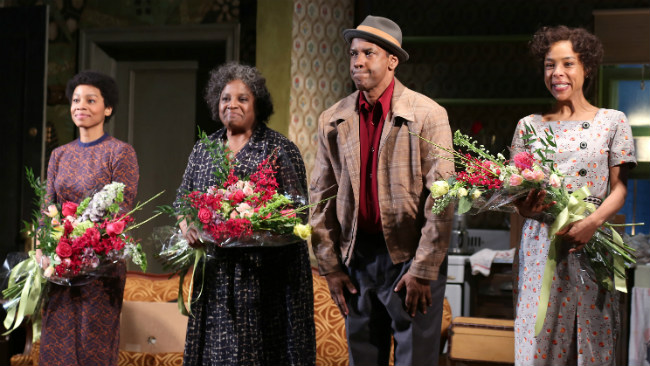 On Friday night, Denzel Washington and the cast of the new Broadway revival of A Raisin in the Sun had a very special guest at the Ethel Barrymore Theatre: former NBA Inside Stuff host Ahmad Rashad! Oh, also: Ahmad’s girlfriend, White House senior adviser Valerie Jarrett, his pal Michelle Obama, and, right, right, Barack. Yep: The president was most definitely in the building.

In town to speak at Al “I’m not a rat, I’m a cat” Sharpton’s National Action Network’s annual conference, Obama decided to take in a little culture. Putting aside that this was Denzel’s first Broadway turn since 2010, the choice seems like a no-brainer. Certainly, Lorraine Hansberry’s classic play — about the struggles and joys of a postwar black family on the south side of Chicago — must have a particular resonance for the Obamas.

“This is a very historically heady moment,” said LaTanya Richardson Jackson, who plays grand matriarch Lena Younger (but looked years younger and oodles more regal outside of her costume, in a crisp white dress shirt). “And it’s not easy, you know what I mean? So I understand everybody’s excitement. But you have to be in a controlled environment to deliver the play.”

Presumably not helping matters there: the earsplitting, high-pitched siren that sounded as soon as the president and his crew sauntered in. At the time, the house lights had gone down, and the play was supposedly moments from launching. But everyone in the room knew the Obamas still hadn’t appeared, and everyone in the room was ready for that moment. And so when they showed — flanked by Secret Service, in the dark, and loping down the aisle to their seats a few rows back from the stage — the reaction was decisive: Shrieks and cheers and camera flashes erupted, and handshakes and back-claps were doled out in great force. Barack and Michelle, loose and grinning, handled it all like pros. As you might expect.

And underneath all the whoops came two noises. First, an aggrieved announcer, speaking over the PA and repeatedly urging the crowd, “out of respect for the actors,” to sit the hell down. And second, that shrill Eeeeeeeee! The oddness of the situation was pronounced. Outside, in midtown Manhattan, the streets were barricaded off, with packs of NYPD guarding every street corner; out in front of the theater, airport-esque security procedures had been established. And so it didn’t seem like a stretch to imagine this blisteringly annoying sound effect was some sort of Secret Service technique, specially engineered to forcefully hush the Obama-crazed rabble.

And then it just kept going. And going. And going. The announcer had to come back, to assure us this wasn’t an emergency situation, and that, really, “out of respect for the actors,” we should all stop popping out of our seats to snap horribly blurry shots of the back of Obama’s head.

And so we sat in silence, wondering if this noise would ever end, wondering what Ahmad and Valerie were talking about, wondering if Michelle had sprung for a souvenir cup. And finally, to more great cheers, the noise died down. And then the play began — with the shrill, elongated squeal of an alarm clock. And then that, too, died down, to one more round of relieved hoots and hollers.

It turned out that was no Secret Service nothing. As an usher explained to folks milling about at intermission, the stage mics had been turned on already, so the unexpected surge of cheers had overloaded them — immediately blowing an amp. And, somewhere, presumably, a stage manager was yanking his or her nails out in penance.

Afterward, speaking of the incident, Richardson Jackson said, “And that’s where we like to think that we’re getting in our Zen moments!” Thankfully, though, “This is the second time I’ve done this. We saw [Obama] when I was doing Joe Turner[’s Come and Gone], with Bartlett Sher’s production. I’ve had him at my house. I just came from a birthday party in January [that he attended]. So I get to enjoy a bit of a kind of relationship with him. Everyone was so hyped and excited, and I was glad that I wasn’t, because I probably would have fallen apart like I did the last time.”

Sean Patrick Thomas (yes, that Sean Patrick Thomas), who plays Joseph Asagai — a politically enlightened suitor wooing daughter Beneatha Younger — wasn’t quite as calm. SPT got to the theater early, to calm his nerves, and that was without knowing quite what was in store. “They never actually told us,” Thomas explained. “It was always whispers like, ‘There’s a high-level government official coming.’ The rumors started to spread, in the trades and on Twitter. And Denzel was saying, ‘Come on, who else could it be?’ But nobody ever actually said he was coming. And it was never actually real until we met him.”

At intermission, Obama went backstage to pal around with the cast. “He’s just a very jocular guy,” Richardson Jackson said. “Just good all around. He said he was enjoying the play. And Denzel was joking with him — did he wanna know what happened next?”

“He was just telling us how good of a time he was having,” Thomas elaborated. “He was very complimentary to each individual person. He was so normal and regular and so cool.” Also: “Both he and Michelle are way better-looking in person. You see him in person, it’s — “‘Wow! You’re like a movie star!’”

Obama stayed throughout the whole second act, then even waved off his Secret Security detail to stick around for the curtain call. Taking in the applause, Washington — who beautifully embodied the fumblingly ambitious, intermittently boozed-up Walter Lee Younger (in a role perfected, of course, by Puffy) — grinned and lifted his fedora in the president’s direction. Then he made a shuffling little motion, kind of like a combo hand toss and foot stamp, that seemed to translate to something along the lines of “Can you believe this?”

Afterward, Thomas was mostly just glad it was over: “You talk about, ‘It’s just a show. It’s the same show we did yesterday. Just do the show.’ But it’s not the same.”

Asked whether she, a veteran of this performing-for-the-president business, had given any advice to her fellow actors, Richardson Jackson — perhaps thinking about the inanity of telling Denzel how to do this — responded with a bit of a jokey harrumph. “Are you kidding? Are you kidding? This is real life. You just hold on and ride.”

Filed Under: We Went there, Broadway, Denzel Washington, Barack Obama

From A$AP Ferg to Zedd: A Coachella-Informed Guide to 2014 Music Festivals