We Went There: A Nearly Empty Sunday-Night Showing of Justin Bieber’s Believe 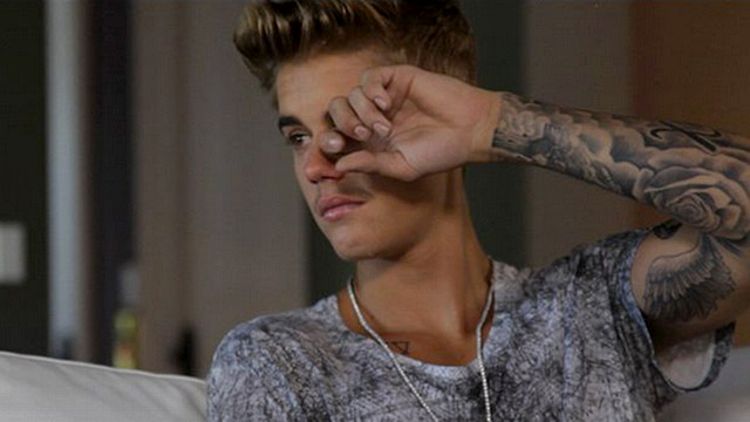 One of the best things I saw at the movies this year came about 25 minutes into Justin Bieber’s Believe and involved a large, possibly Icelandic man. The film had just finished running through the expected milieu — screeching tweens declaring their love and adoration for Mr. Bieber through mouthfuls of braces — when it cut to a more unlikely sight: a big, tattooed fellow, speaking uniquely accented English with what I took to be the clipped tongue of the Scandinavians but might just as easily have been, say, a Na’vi accent. It’s freezing where he is, and he’s all alone, far from the screaming gaggles. But he’s also here to express his love and adoration for Mr. Justin Bieber. He explains that he’s a very big fan, very much inspired by the pluck and guile of the young man. And then he lifts up one pant leg (possibly they are sweatpants?) to reveal a massive tattoo, covering his upper thigh area, and depicting, in rough strokes, the gloriously beaming face of Justin Bieber.

And yet, somehow, this wasn’t enough to fuel Believe — released, presumably, as Oscar-bait counterprogramming, on Christmas Day — to any kind of respectable box-office showing. Nearly four years since Justin Bieber: Never Say Never opened to a surprise, bonkers $29.5 million — en route to a $73 million haul and the title of “most successful domestic concert movie ever” — Believe cratered, with a paltry $4.5 million opening stretch. As The Hollywood Reporter points out, that’s a worse showing than concert/docu-flicks from the Jonas Brothers, pre-twerk Miley Cyrus, and One Direction; it’s even worse than Katy Perry’s as-to-date genre nadir Part of Me.

There are mitigating circumstances: Believe is opening on way fewer screens than Never; also, it was apparently knocked out on a $5 million budget and so will certainly make money. But there’s no way around it: For a dude deeply in need of an easy “W” right now, being in any way associated with the phrase “box-office flop” just is not a good look. “Box office observers questioned whether some mothers kept their younger tweens away from Part of Me,” THR pondered, “and they are wondering the same thing in regards to Believe.”

But you know who wasn’t kept from Believe? Me! In 2011, I was one of the millions charmed by the scrappy bootstrapping of Never Say Never (also, in the theater lobby I got to see a girl hump a Justin Bieber poster). In the bracketing years, I haven’t spent much time not aware, concerned, or mesmerized (professionally or, uh, otherwise) by the picaresque adventures of Justin Bieber. I happen to believe that if you find nothing interesting in this dude, you’re not paying close enough attention. So here, in the last days of 2013, on a rainy Sunday night, in a nearly empty movie theater, I had to see what Justin, Scooter Braun, and affable director Jon M. Chu (brought back from Never Say Never) were peddling.

(Yes, that means I’ve now seen both Justin Bieber movies in the theaters. Fortunately, I didn’t have to go alone. To the people in my life who have prevented that from happening: You know who you are. A big [hand heart] to you.)

So, what do we got? Ehh. Not much, really. Aside from the basically pleasing aesthetics of the concert footage, and Our Man in Reykjavik, Believe is, sadly, pointless.

It kicks off with Bieber, his ungelled coif reminiscent of the hair flop of yesteryear, tinkling the piano. A sweet throwback? He’s picking out a familiar tune. Some classic of the American Songbook? It’s … it’s Lil Wayne’s blowjob anthem “Lollipop.” He smirks. Then we see his little baby ’stache and hear he’s growing it out in a self-aware doomed attempt at maturity. (It’s quite a creepy mustache. I’m not a fancy Hollywood insider or anything, but there is a 7,300 percent chance it negatively affected word-of-mouth box-office impact. Could they really not get him to shave it for the 37 minutes he sat down to do the interview bits? This is actually quite telling.) And herein the pervading “not a boy, not yet a man” dichotomy.

The mission statement is to project an image of a dude piloting the G5 himself, as turbulent a flight as that may be. A parade of people directly employed or luxuriously compensated by Justin Bieber Enterprises — songwriter Mike Posner, producer Rodney Jerkins, even road manager Kenny Hamilton — is trotted out to sing high praise of JB’s creative fire. Jerkins says he “thrives” off Bieber’s ideas, which would be eye-roll-inducing enough if we didn’t also get footage of Justin heatedly scribbling down lyrics on a legal pad as Scooter’s voice-over tells us how “it all starts here.” Does it all start here? Or do the oodles of top-line producers, churning out hours of would-be hits and laying them as sacrificial gifts at his feet, have something to do with it?

Never Say Never had a narrative — young kid from nowhere uses Internet and God-given talent to find fame — that was feel-good, easily digestible, and true. I mean, OK, maybe it was all total trite cockamamie bullshit (in particular, you could quibble with how much of the early YouTube attention was truly purely grassroots and how much was patented Scooter strategery). But Chu handled that material, dare I say, masterfully. I’m not ashamed to say that I swallowed that stuff hook, line, and sinker.

Lots in Believe ranges from cloying to baldly emotionally manipulative. (Nothing — I repeat, nothing — is worse than Scooter Braun’s sanctimonious pre-show ticket giveaway shtick. At one point he makes a group of six girls pick one friend to stay outside, pretending he only has five tickets. And then they actually pick one. The kicker is that the booted girl gets to watch the show with Scooter. I mean, that is some Lord of the Flies shit right there.) But the movie commits only one unpardonable sin: ineffective branding. Justin Bieber, tortured creative whiz kid? Sorry. We don’t believe you. You need more people.

In the drum-up to the release, Braun and Chu went out of their way to promise — to promise!!! — that the movie was reworked to broach the Bieber mini-meltdown. In reality, it’s barely tacitly acknowledged, mostly through jokes about sagging pants. (Ryan Good, former swag coach nonpareil, warns of the dangers of having one’s trousers fall all the way down, as once happened to him while browsing a bookstore’s nonfiction section.) When Chu asks Justin directly how he’ll avoid becoming a train wreck, Bieber scoffs. “I’ve seen it happen,” he says. “I’m not gonna be stupid enough to let that happen to myself.” And that’s it.

Which, on the one hand, fair enough. Allow me to be the latest person to say this: At 19, I was doing way more embarrassing things than peeing in mop buckets and being crude toward photos of Bill Clinton — I was peeing in dust pans and being crude toward portraits of John Quincy Adams! — and I didn’t have Justin Bieber’s money, privilege, or pressure. There’s one POV shot of Bieber’s SUV leaving the arena parking lot after a show, and it’s being swarmed by girls. They’re clawing at the doors, leaping on the windshield, and are, in general, completely unconcerned with the possibility of being trampled underfoot. It looks semi-staged, but it’s still terrifying.

So, yeah: He’s fulfilling his extremely taxing duties as an international arena act. He’s still doing his job. So if Team Bieber wants to sweep all the noise under the rug, I get it. But would it have been too much to ask for just a teensy-weensy bit of drama? I know I’m an idiot for thinking we’d actually be getting into some shit here (recent TMZ gems: “Cops to Justin Bieber — Keep Your Hotboxed Vans Out of L.A. … Or Else”; “Bulldog to Justin Bieber — PLEASE PLEASE PLEASE Don’t Adopt Me!”), but maybe, I don’t know, a scandal montage followed by Bieber, head in hands, clucking self-deprecatingly? No? Nothing?

On Christmas Eve, the day before the movie opened, Bieber tweeted, then deleted, this: “My beloved beliebers I’m officially retiring.” A rep from the Bieber camp then followed up with an official statement denying it, pleading that the media focus instead on Bieber’s humanitarian efforts in the Philippines. Which, with all respect, nice try. The movie, not a very good one, flopped. And we’re still going to be talking about Justin Bieber’s mustache for a little while longer.

The Price Is Right Gives Away Its Biggest Prize, Contestant Has Exact Right Reaction