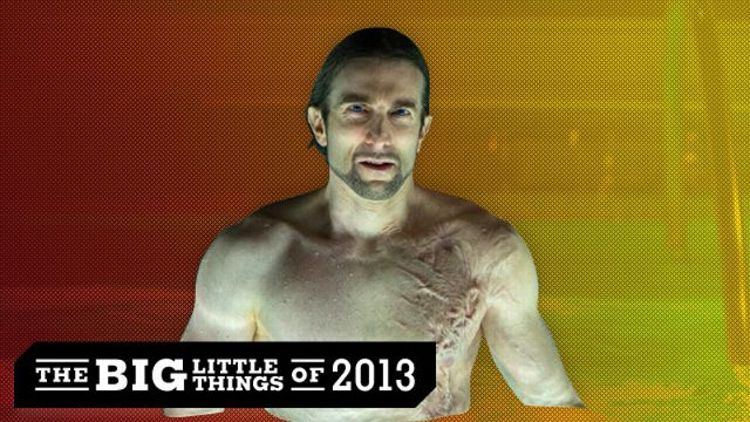 I catalogued villains as a kid. I had the time. When I acted out in school — mimicking Mrs. Liguori in second grade after every utterance of “Now, claaaaasss,” or raising my hand to answer a question with “I haven’t the foggiest” — I’d get sent outside. I’d slide my desk, dragging its Formica-and-steel frame across the room and into the hallway. The only thing worse than sitting in class is watching everyone else sit in class from a hallway. And there I sat for the better part of the day, with nothing to do but write apology letters to my teachers. Sorry, Mrs. Liguori. I didn’t realize you were so bad at having a sense of humor.

After finishing the apology letter, ripping it from the spiral notebook and folding it into a paper fortune teller, I’d get to the real day’s work. I would open to a new page in the Mead and begin writing lists. All the WWF Superstars. The Best Ice Cream Flavors. The Starting Lineup of Every Baseball Team in the National League. I was like a highly shitty BuzzFeed. I’d write these lists with constancy, the ultimate time-killer in an endless period of quiet time. The list I would return to over and again was about villains. Skeletor. Darth Vader. The Green Goblin. Cobra Commander. Shredder. Dr. Claw. Jafar. Starscream. The Joker. Mola Ram. Mumm-Ra. Cartoons and comic books and movies animated my life, but heroes were boring even then. Villains were the thing. It’s not because I was scared of them or wanted to be them. The murkiness of their motivations held an unusual appeal. Galactus isn’t such a bad interstellar planet-eater. He needs those planets for sustenance. Villains are still a prism through which I see shards of culture. That’s why Terence Stamp will always be General Zod, Frank Booth needs to die, and Heath Ledger lives forever.

All’s to say, villains matter to me. And we are living in a terrible time for villains. All the comic-book culture, infantilized box-office stratagems, and youth-targeted world-building haven’t produced a decent original villain in years. This may be because, not unlike the Renaissance or the rise of bop jazz, we have already lived through the most fertile creative period in the field of villainy. And so now every villain experience is meta or mangled. Thanos is coming to the Marvel movie universe soon, and he isn’t exactly a shaded moral crisis in waiting. Nor are World War Z‘s antlike zombie hordes, or Catching Fire‘s dour President Snow. These are pat figures of power or soulless roving viruses.

No one was more “villainous” in 2013 than the South African actor Sharlto Copley, who appeared in his co-conspirator Neill Blomkamp’s disappointing allegorical sci-fi adventure Elysium and Spike Lee’s somehow even more disappointing remake of Park Chan-wook’s Oldboy. In the former, Copley was Kruger, a sort of human drone strike tasked with yelling a lot and firing shoulder-missiles. In Lee’s adaptation, he was Adrian, the mad-eyed mastermind behind protagonist Joe Doucett’s imprisonment and subsequent torture. To say Copley went over the top in these movies is to undersell the height of the top. He spits and howls and growls in one film. He channels a mustache-twirling Vincent Price in the other. He has no motivation in one. He has all the motivation in another. He is every facet of evil and terror, roiling with rage and quietly executing the grandest revenge scheme ever. He is the engine of story, and straining for intensity.

That Copley, the soft-mannered, bumbling star of Blomkamp’s District 9, has assumed this status in Hollywood — character-actor baddie — is more than a little surprising. As Wikus Van De Merwe in District, Copley had an uncommon charm — even as he transformed into an oversize, ghettoized bug, he held our sympathy. He’s not an evil man, and so rather than create villains with backstory he must go to bizarre places. With facial hair. With physicality. With BBQs. He’s not subtle, and a villain doesn’t have to be. But he’s missing Ricardo Montalban’s glint. Gary Oldman’s rodentlike mien. Joaquin Phoenix’s sniveliness. Copley is an interesting performer, but his year is endemic of a culture more focused on synergizing story than on raising stakes. I don’t want bigger villains, I want truer ones. I would never put Adrian or Kruger in my Mead. They can’t hang with Skeletor.

We Went There: A Nearly Empty Sunday-Night Showing of Justin Bieber's Believe