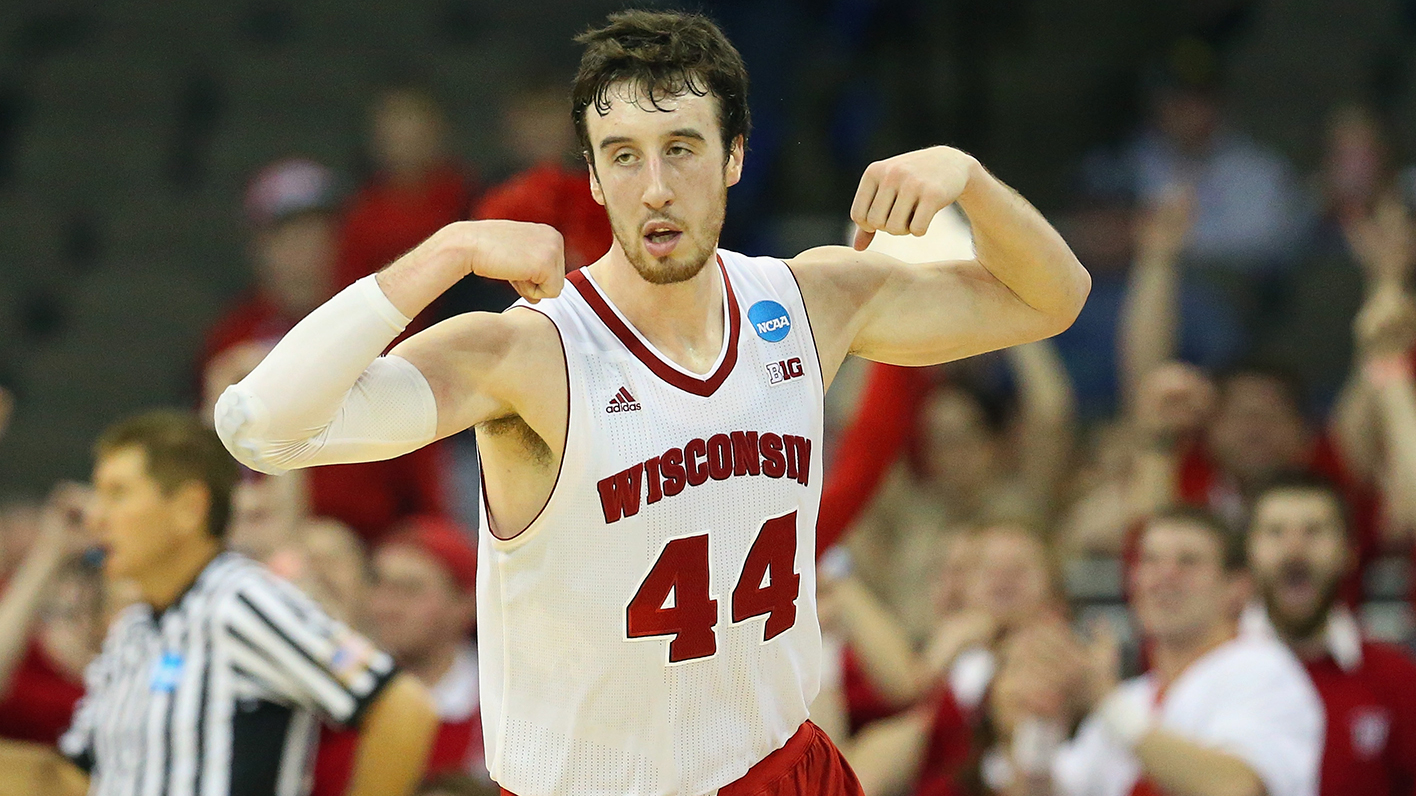 The NBA draft is upon us! We asked the amateur general managers on our staff to pick someone outside of the projected lottery on whom they are particularly sweet and pair them with a mid-to-late first-round team. We’re looking for the next Draymond Green or Khris Middleton here. Welcome to Sleeper Watch!

Sean Fennessey: The Jazz are sniffing around at 12. MJ and the Hornets may be willing to deal Cody Zeller to move up for him. Phil Jackson might just go full Zen proverb and take him at no. 4.1 Not a sleeper, you say? Not quite. If we’re being honest with ourselves, Frank “The Tank” Kaminsky is likely not going to find his way into the lottery. This, despite national player of the year honors; the satisfaction of thoroughly outplaying Willie Cauley-Stein, Karl-Anthony Towns, and Jahlil Okafor in the Final Four; and the recent transmission of this tweet:

Frank may be top-10, but he’s still barely mentioned. The indignity of a JCPenney sponsorship and barely a whiff of true lottery love is only right for the workingman’s Dirk. FSK Part III is one of those classic four-year senior-leader types — the stats improve every season until a senior-year captainship in which a pimpled boy becomes a 21-year-old falcon that dominates Coach Cal’s baby teens. Kaminsky, of course, is not terribly athletic, good at dancing, or able to say he does not endorse JCPenney. Life sucks. But sometimes all that matters is that one true friend: The Glass.

If Frank doesn’t go no. 4 — seriously, picture Melo’s face when that Polish name is uttered tonight — I hope he goes 60th. Anything to put more gas in that tank, some fire in that belly, some wind beneath those wings. Let the falcon soar.

Chris Ryan: Help the aged. Jerian Grant is all of 22 years old, which apparently makes him Jason f’ing Robards in this draft. One of these days, someone will be able to explain to me why guys like Noah Vonleh and Jeremy Lamb, who play basketball like they are watching the plastic bag video in American Beauty, get drafted over young men like Grant. Maybe it’s because NBA franchises would rather chisel away at stone and find the sculpture within than be delivered the finished product? Does Grant’s already established pick-and-roll smarts, NBA-ready body, and pressure cooker experience somehow make him a less attractive development project? Grant is a 6-foot-5 human periscope who can see all over the floor. DraftExpress’s Jonathan Givony describes him as “decisive” and “unselfish.” It’s going to take teams years to teach those same characteristics to some of the higher-rated prospects in this draft.

In a way, being underrated is the best thing that can happen to Grant. Jeff Goodman and Chad Ford have him going 18th and 21st, respectively. That’s Houston or Dallas — two teams looking for immediate playmaking help in the backcourt. They need look no further than this leprechaun with rocket boosters strapped to his back. 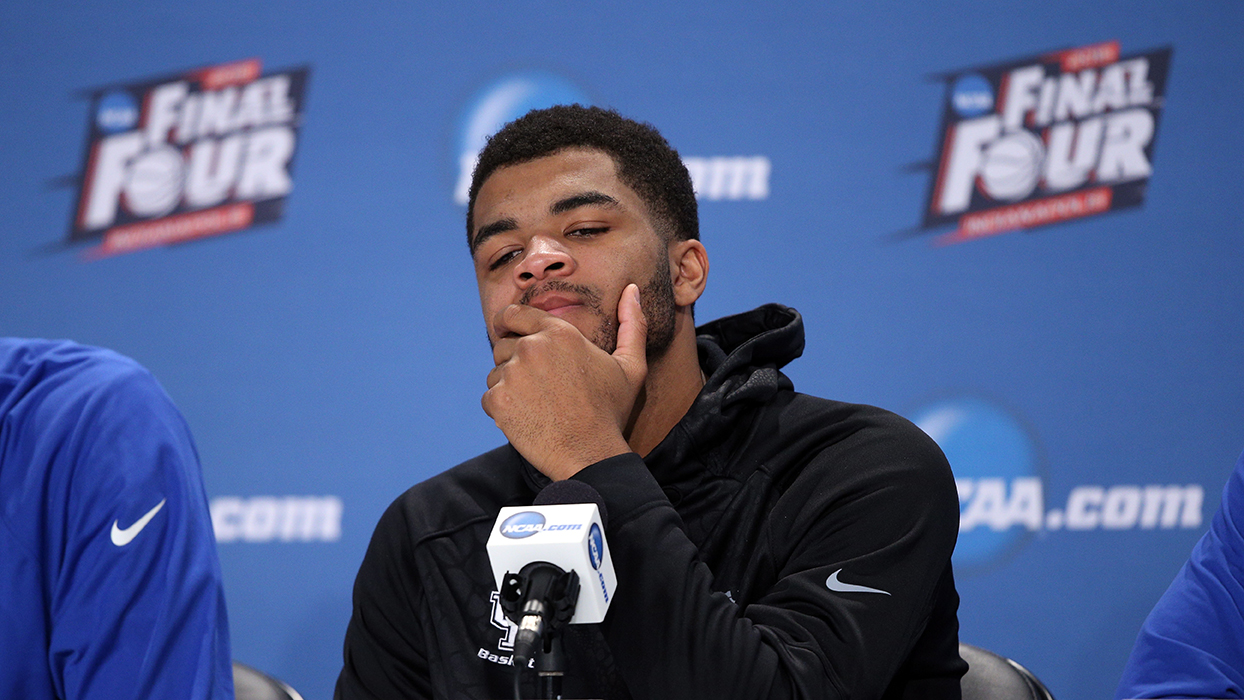 Ryan O’Hanlon: Did Andrew Harrison shoot just below 38 percent from 2 this season? Has no player who’s shot under 38 percent from 2 been drafted since the ’70s? WHO CARES. While you may look at the noted Frank Kaminsky skeptic and see an “enigma … [with] poor body language” who isn’t quick or creative enough to play the point and can’t shoot well enough to play the 2, squint hard enough and you’ll see the future of the NBA. Judged against the traditional designations of the sport, sure, you’ll find deficiencies across Harrison’s game based on wherever he’s slotted. But in the fully optimized NBA of, let’s say, 2020 — don’t fight it, Warriors skeptics — where midrange shots go totally extinct, positions don’t exist, everyone does a little bit of everything, and the whole league is tall enough but also short enough to reasonably guard all five positions, Twin A is the face of revolution.

Less idealistically and more immediately, though, Harrison’s a smooth, long-armed, versatile playmaker who can get to the rim, play the 1 through the 3, and shoot well enough to not be ignored. In other words, he’s the kind of guy whose flexibility gives already-good teams a boost come the postseason. After those 60 wins puttered into a third-round sweep, I’m looking at you, Hawks. 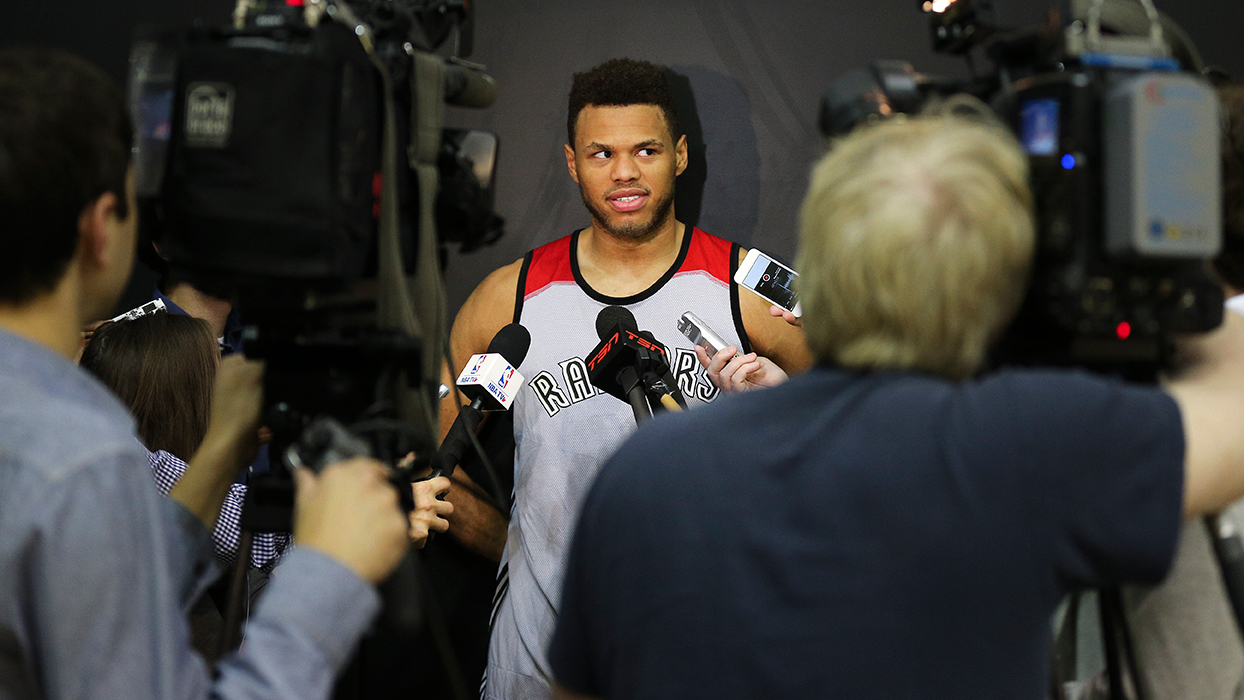 Danny Chau: I swear I mean this in a good way, but watching Justin Anderson make a significant leap in his offensive game last year at Virginia reminded me a bit of how Derrick Williams tricked the world into believing he was the second-best prospect in the 2011 draft.

They’re similar athletes, with a kind of Corey Maggettesque rigidity that affects their ability to accomplish anything more than rudimentary drives — like a car with a compromised axle. But give them space and they’ll show off ridiculous bounce. There was a point in time when teams were trying to talk themselves into Williams as a 3, but not only did he have a compromised axle, he was exclusively a two-footed jumper, and defenses are too good to allow guys like Williams to wind up. Anderson is more versatile, and he has shown great explosion off one or two legs.

Anderson improved his 3-point shooting by nearly 16 percentage points, from 29.4 percent as a sophomore to 45.2 percent as a junior. In 2011, Williams went from not shooting 3s (and making only a quarter of those he did attempt) to scorching the nets from deep at a 54.5 percent clip.

As we know now, Williams’s success from behind the arc was a complete fluke, and he hasn’t been able to leverage his situational athleticism consistently. Luckily for Anderson, he won’t have the burden of expectation that comes with being the no. 2 pick. Who knows how Williams would’ve done had he gone in the 20s, or if teams were more patient with his weaknesses. For a player like Anderson, this is a blessing in disguise. If Anderson’s improved shooting holds up, he has the size, the skill set, and the mentality to be the next Khris Middleton/DeMarre Carroll. And he’ll probably be there for a team that could use a guy like that to get it over the hump. 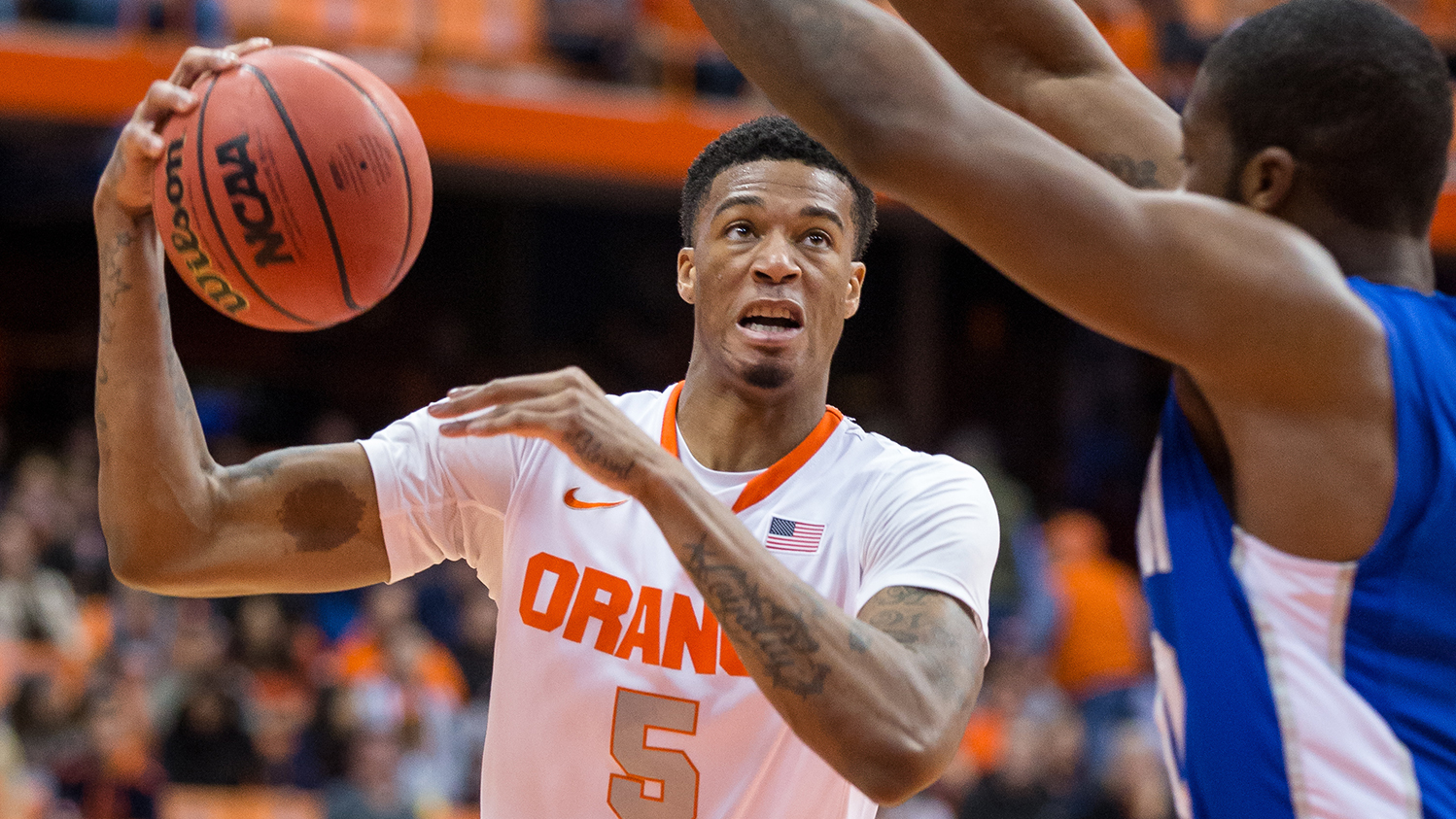 Dave Schilling: Here is the NBA draft equivalent of the shrug emoji. Chris McCullough is a power forward who can protect the rim, score while facing the basket, and play in modern, fast-paced offenses. He’s packing a high-arcing midrange jumper that could be deadly in pick-and-pop situations with the right point guard.

That shrug emoji comes in because of a torn ACL that sidelined him for half of his one and only year at Syracuse. He also needs to bulk up and has a rep for being a bit tentative in the paint. McCullough isn’t a “value” pick. He’s a whole value meal’s worth of potential. The come-hither stares from NBA scouts started early and did not sit well with notorious curmudgeon Jim Boeheim, who tried to shame McCullough into staying another year. His production and minutes went into the toilet by mid-December. Then, the injury happenend and he disappeared from first-round projections. He popped back up in the last few days because, well, just look at this guy. His return to first-round prospect status comes despite speculation that he might not even be able to play next season.

As an injured big man, McCullough seems like a perfect fit for Philadelphia, but the destination that makes the most sense for Chris McCullough is actually Brooklyn — picking at 29. He’s from New York and seems plenty happy to be there, if his Twitter account is any indication. Looking at the Nets’ payroll is like watching a gold-plated Rolls-Royce with five original Basquiat prints in the trunk get set on fire and pushed into the Grand Canyon.

Brooklyn isn’t going to be competitive until it can get Brook Lopez and Joe Johnson off the books, stop falling ass-backward into the eighth playoff spot, and finally get into the lottery. Why not take a shot at a guy who, worst-case scenario, is a low-investment bust? Best-case scenario, he’s doing this to Joakim Noah and Kevin Love in a year. 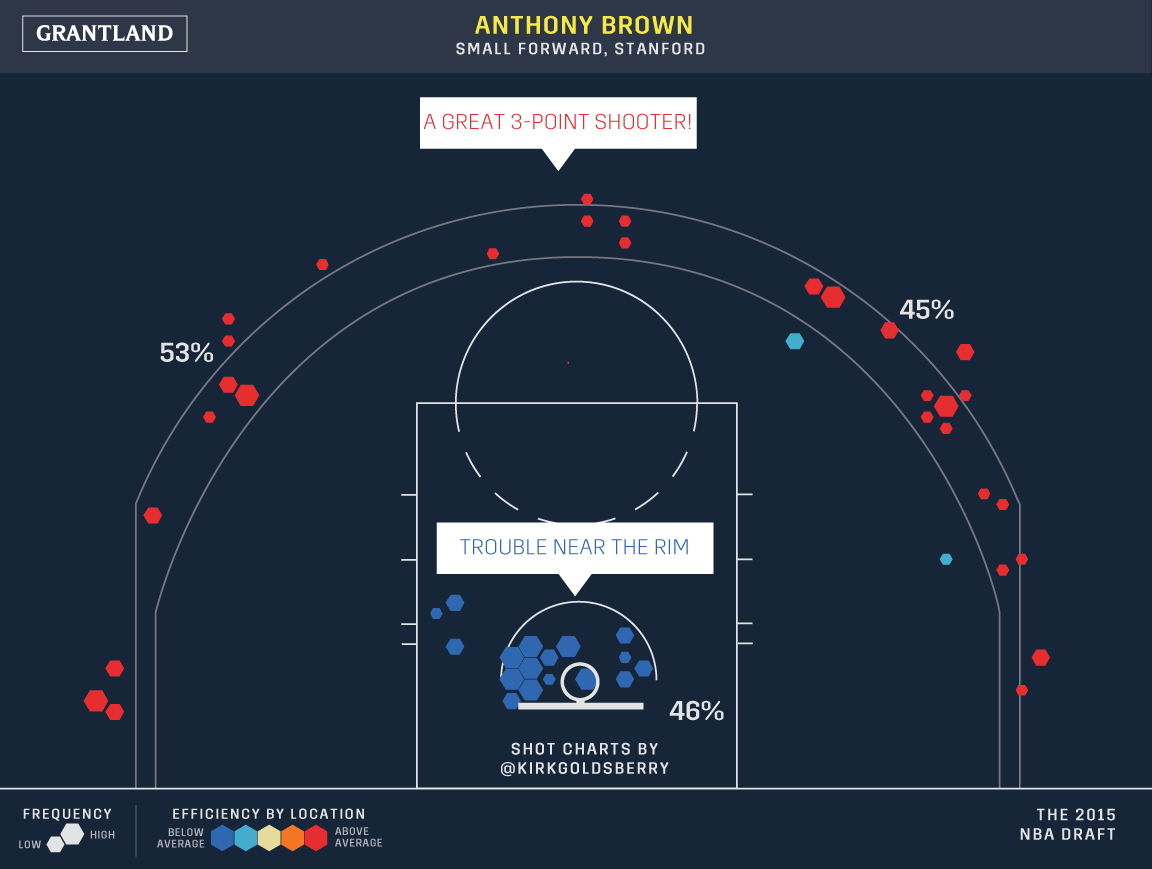 Kirk Goldsberry: You know what’s really valuable right now? The ability to make 3-point shots. Although the top of the draft always includes a flock of top-flight athletes, some of the NBA’s best 3-point specialists were found way outside of the lottery. Kyle Korver went 51st. Danny Green went 46th. Wes Matthews didn’t even get drafted. You get the idea. Stanford’s Anthony Brown is a decent candidate to be the next Korver, Green, or Matthews. The dude can flat-out shoot, and most mock drafts have him going near the end of the first round or in the beginning of the second. If he goes to a spot-up paradise like Golden State or San Antonio, he could make a difference right away. 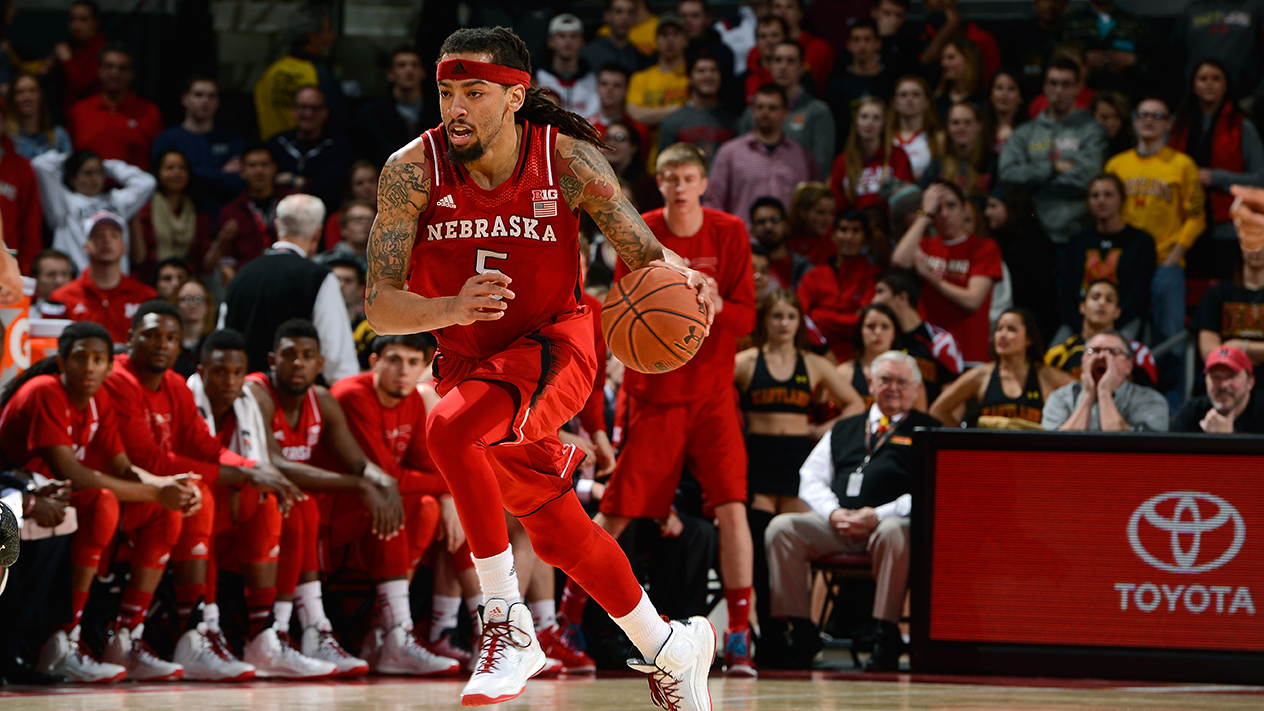 Jonathan Abrams: I’m going with Nebraska’s Terran Petteway as my sleeper pick. He’ll probably go somewhere in the second round. He likely would have entered the draft in 2014, after leading the Big Ten in scoring, but his mother was fighting cancer — a battle she ultimately lost the day before Petteway planned to declare.

I like Petteway as a sleeper because he plays both ways and can guard multiple positions on the wing. He transferred from Texas Tech to Nebraska in 2012 and sat out the 2012-13 season. Not many players can say they shouldered the burden of the responsibilities for a Big Ten school like Petteway has the past two seasons.