We Tried to Go There: Matt Lauer’s and Al Roker’s Today Prostate Exams 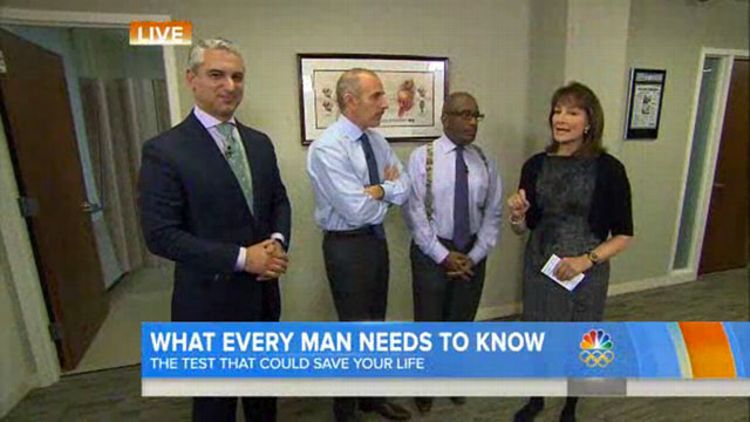 This is all I saw (via The Hollywood Reporter):

“The Today mainstays will undergo prostate exams — live and on camera — during Thursday’s episode of the NBC show.”

I read that and I immediately thought six things:

So that’s exactly what happened.

I woke up at 5:30 a.m. And then I stumbled into another room to find a Sharpie, a pen, and my big paper. And then I made a TV-worthy sign.

Even if I didn’t get on TV, this sign would. And we’d both be present to watch Al’s and Matt’s prostate exams.

Walking outside in the darkness around 6:10 a.m., I got a coffee and marched toward Today. About 20 minutes later, I arrived and was greeted by a crowd waiting to get in. I’ve seen Today fans on TV, so I knew there was the potential for droves to be out for Al’s and Matt’s procedures. But there were only about 20 people in front of me, 30 minutes before the show aired at 7 a.m.

About five minutes later, we walked in and I had a prime spot. Just a row back from the barrier. This was good.

Surveying the crowd, I realized a few things. One, I was one of only a handful of people there by their lonesome, with the majority of the crowd there as a family or an organization. Secondly, one of the segments on the show was about adoption, and many of those in attendance had signs about adoption. Third, no one else had a sign about Matt’s and Al’s prostates.

Once I realized this, another flurry of questions entered my head. Wait, we’re outside. Are Al and Matt getting prostate exams outside? Seems like a public health nightmare. Wait, what exactly is a prostate exam? What did they really mean by “live and on camera” anyway? Was my sign big enough?

My daze of confusion and self-doubt was broken by a security guard, who announced his presence by saying “looks like another day in the zoo” and then walking away.

That in itself made waking up at 5:30 a.m. worth it. But still, the question of how live and on camera these prostates would be remained.

At 6:50, camera and sound crews made their way to our side to begin filming a few segments. A few people up front did the standard “I’m Etta May and I’m from Louisville, Kentucky, just wishing my best friend Janis a happy 64th birthday WHOOOOOOOOOOOO” bits. Two of them were right in front of me, these women from Louisiana dressed up as characters from Duck Dynasty.

Of course they were going to get on TV. I don’t even know if they had a sign. Why didn’t I bring a costume? Why didn’t I dress up like Al’s and Matt’s prostates?

After this, there were a few sweeping camera shots of the crowd. Each time the camera came my way, I shouted and held up my sign. One of these was bound to get on television. It had to. I was the prostate health guy, after all. They needed me.

Finally, with only minutes left, the guy Louis from the “Kathie Lee & Hoda” segment about makeovers did a lap, greeting the crowd and taking pictures with the Duck Dynasty ladies, and then it was time to start.

When the show began, it all took place in the studio. All we were doing was watching a monitor outside. Flagging down my security guard friend, I asked him what the deal was with the prostates. He said he didn’t know, but that it definitely wasn’t happening outside. It was probably happening elsewhere, out of the studio.

You know, a doctor’s office of some sort.

Realizing how much sense this made, I waited until they aired the schedule of the Today segments. Finally, around 7:30 a.m., they said the witching hour for prostate exams was 8:16 a.m. The security guard let me out and I raced back to a television. But not before finding Al.

You could tell it was on his mind, getting his prostate examined live and on camera in front of the world. What a brave guy, that Roker.

Arriving home at 8 a.m., I turned on the television to find a Today set sans Al or Matt. Apparently, they’d already left to go see the doctor. Another bit of news:

The prostate exams would be done tastefully. As in, behind closed doors. AS IN, THERE WOULD BE A LIVE CAMERA ON A CLOSED DOOR.

And 16 minutes later, that’s exactly what happened. I watched Matt Lauer walk into a room and come out with a completed prostate exam 34 seconds later. And a few minutes later it was Al’s turn, and he did the same thing.

Yes, I realized the important point of this bit, to show the men of the world that there’s no reason to be afraid of a prostate exam. And to educate. Sure, it’s uncomfortable and there are more enjoyable ways to spend half a minute, but if it can save your life, you might as well get over it and do it.

Because your old friends Matt and Al just did it, after all. And they lived to talk about it on camera.

But, as they say, don’t bury the prostate lede. I was out there trying to get scarred for life before 9 a.m. Can’t a kid dream?