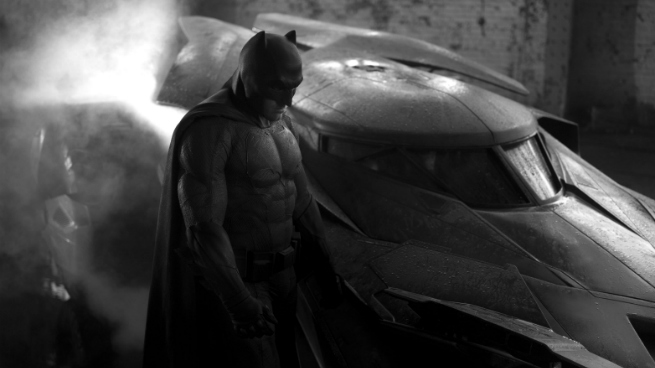 Superman is not exactly the funniest dude on Krypton. He has never been known for his wit, and he’s got so many other skills, he doesn’t really need to be. But it turns out the decision for DC heroes to be humorless on film wasn’t just a stylistic choice put forth by Christopher Nolan and copied by others after that model proved to be a success. Apparently it’s DC’s new company policy, and part of a brand strategy to differentiate DC’s film fare from the jokier Marvel movies.

HitFix claims that Warner Bros. has a “no jokes” rule” for its DC movies. Drew McWeeny writes that “DC treats their superhero characters more like gods,” while Marvel’s characters are more recognizably human. This makes a certain amount of sense, because Superman is not a human (he’s an alien), nor is Wonder Woman (daughter of ancient Greek deities). Batman on the other hand, is just a rich kid whose parents’ deaths spur him to start fighting crime. But the gruff, sad Batman of the Nolan films didn’t exactly feel very human, either.

It’s understandable why the current Batman is so sad and angry. It’s to make sure we don’t confuse him with the more surrealist Tim Burton Batman, the goofy Joel Schumacher Batman, and most important, the TV Batman played by Adam West. The ’60s TV Batman took whatever coolness and mystique Batman may have possessed in the comics and turned him into a campy, dancing buffoon. If DC is afraid to let its movie Batman dance like Marvel’s Star-Lord, it’s because the company is terrified we’ll remember the Batusi. Meanwhile, Bryan Singer’s Superman Returns was zinged for being neither silly nor serious enough, just boring. And Zack Snyder’s Man of Steel took Superman in the Nolan direction, toward a dark palette and dystopian male sadness.

Although the Nolan movies set the tone for the latest wave of superhero films, the trend has since shifted away from darkness toward the lighter tone of Marvel hits like The Avengers and Guardians of the Galaxy. This can be traced in part to the source material — Marvel comics are generally more humorous. It’s in the DNA of DC and Marvel to represent different ideologies, and for these ideologies to battle cosmically forever like Professor Xavier and Magneto, each asserting the superiority of its own philosophy over the other. If DC tried to copy the Joss Whedon–isms of Marvel, it would get dragged for going off brand, just as Marvel would have had it opted to make Nolan-esque movies. Marvel movies aim to balance humor with the potential for world-ending darkness that most superhero movies entail. And the Nolan Batman movies ended up being pretty campy despite their desire to be nothing of the sort. Who didn’t laugh the first time they tried to understand what Bane was saying in The Dark Knight Rises?

A superhero movie that attempts to be too cool and arch risks making story investment pointless, but a superhero movie that is too serious and staid, with no levity, can be downright tedious. My personal belief is that world-ending scenarios call for at least a little bit of gallows humor, but to each their own. My favorite Batman is Batman: The Animated Series, which was incredibly dark for a children’s cartoon, and which understood how to strike Batman’s tone of gothic melancholy without falling into camp. Batman: The Animated Series is the only Batman to have ever made me cry.

Take this whole “no jokes” policy with a grain of Kryptonite, as it has not been confirmed by Warner Bros. or DC. But considering the summer was won by the jokey B-movie antics of Guardians of the Galaxy, one wonders whether it’s the right move for Batman v Superman: Dawn of Justice to be as serious as its title. I’m not sure you even can do an Aquaman movie (with Jason Momoa!) without making at least one little fish joke. Batman v Superman isn’t due to come out until 2016 (!!!) so there is plenty of time for the DC v Marvel film wars to rage. I’m so desperate for a Wonder Woman movie at this point that I’ll take her serious, funny, whatever. Just get the Lasso of Truth rolling already.

Luckily for fans who are waiting on summer-tentpole release dates, there are plenty of still-unadapted comic stories about many sorts of superheroes. In comics, you can find stories about characters from both universes done seriously and goofily, because that is the upside of a multiverse. Superman can coexist with Bizarro Superman. What was delightful about Guardians of the Galaxy was its promise that a multiverse could exist for superhero films, too, that they need not be a monolith. Eventually, hopefully, superhero films will feel free to take on diversity of both subject and tone.