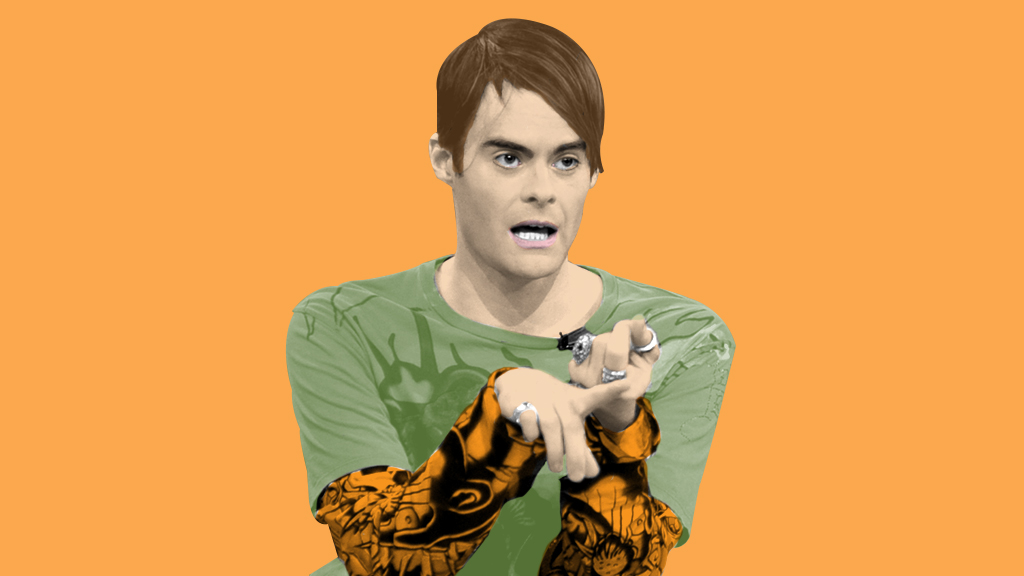 The battlefield smolders under a blood-red sky choked with dust. From the grim tableau of broken samurai swords, dead horses, shocking upsets, mummified driving cats, the torn bodies of notable and forgettable repeating characters alike, and tiny scattered specks of blackened bone that I think used to be Chris Kattan, emerge our finalists.

First, Will Ferrell’s leisurely Sunday-stroll decapitation of Bill Hader. I have an eternal love for Hader, and it should be noted that no cast member has ever managed the trick of making breaking up during a bit an indispensable part of the sketch’s joke DNA like Hader (with writer John Mulaney) did with Stefon. That’s not to say Jimmy Fallon never tried. That said, Hader was always punching above his weight here. Ferrell is simply a Bill Brasky–esque giant.

Of my 10 favorite SNL sketches of all time, Ferrell (often with writer Adam McKay) is probably involved in eight. In his best SNL bits, Ferrell managed to use his white-guy everydudeness in a wonderfully self-aware way, dropping the mask, inch by inch, to reveal streaks of anarchic malevolence that turned over-the-top violence and sociopathology into sly jabs at his own privilege.

There’s the morning show that turns dystopian when the teleprompter goes down in “Wake Up and Smile.” There’s psychopathic middle manager Mr. Tarkanian, of “Evil Boss,” who abuses everyone around him without fear of ever being held accountable. There’s “Crazy Doctor’s Office” the single-most demented skit of the last 15 years that is actually funny. It seems amazing now that Ferrell actually dropped un-bleeped N-bombs during his “Coconut Bangers’ Ball” sketch as out-of-touch crooner Robert Goulet. Perhaps more amazing is that SNL let him do the character several more times, including in a sketch in which Jay Z and Beanie Sigel smoke blunts on air. Ferrell’s genius was his ability to make himself the butt of the joke, to make the offensive things he did during a sketch a commentary on the character he was playing — not just shock-value bullshit. That’s why it works when Ferrell mumbles, “We should get some men with guns and sweep out those ghettos,” during “Wake Up and Smile,” and that is a nearly impossible balance to strike. Get it wrong, and your career is over or you become Gavin McInnes.

And, of course, there’s Ferrell’s Greatest Hits reel, a trove of quotable sketches as unforgettable as anything anyone on SNL has ever produced. Ferrell mining existential suburban unhappiness in “Family Dinner Argument.” Ferrell skewering classic-rock myth-building with “More Cowbell,” a sketch that Fallon, as he was wont to do, subconsciously (?) tries his best to ruin. (Think that’s too strong? Perhaps. But notice: Fallon never once cracked up during a sketch he starred in.) On and on. Alex Trebek. The Devil and Garth Brooks. The pure belly-laugh pop sugar of the Spartan cheerleaders. James Lipton. Harry Caray. Marty and Bobbi Culp. Ferrell made it look so easy that — even with accolades and the movie stardom and the multi-DVD Best of Will Ferrell collections — I actually think he’s underrated. No cast member has ever come up bigger in a more fraught spot than Ferrell did when he donned an American flag speedo on SNL’s second show after 9/11, and that bit probably just barely makes most top 10 Will Ferrell lists, if it makes it at all.

Phil Hartman over Eddie Murphy is an outcome I agree with, though not without reservations. SNL Eddie Murphy really belongs in its own category, after all; his entire career on the show is one outlier after another. How many 19-year-olds are funny enough to make SNL? Does Murphy even make SNL if not for the Doumanian-Ebersol interregnum? How many 20-year-olds are talented enough to keep an entire late-night sketch comedy show from being canceled? Eddie Murphy defined his era. So, it makes sense that not all of Murphy’s work from that time has held up as Saturday Night Live and the rest of the world transitioned away from that era. What does hold up, across the board, is Murphy’s still startling confidence, his swaggering through a scene as if he couldn’t even conceive of a dimension in which he was not hilarious. Murphy was compared to Richard Pryor often because — spoiler — they’re both black. But really they could not be more different. Pryor was vulnerable; his act was basically one uproarious and heartbreaking story after another about what a mess his life was. That was not Murphy. SNL Eddie Murphy had power brokers like Jeff Katzenberg waiting around in the writers’ room just to give him million-dollar checks. If there’s one SNL moment that sums up Murphy, it’s from the December 1984 episode he hosted at 23. During a sketch titled “Black History Minute,” Murphy, affecting a Huey P. Newton militancy, stumbles over a line, and instead of just carrying on, shouts, “So I messed up, shut up!” Of course, that got a laugh, because from 1981 to 1984, it was basically illegal to not laugh at Murphy.

Famously, Murphy hasn’t associated himself with SNL since David Spade made a joke at his expense in the early ’90s for his “Hollywood Minute” on “Weekend Update.”

Phil Hartman is, for my money, the greatest SNL cast member ever. He was a do-everything chameleon who could carry a sketch front-and-center or hold it together just by his very presence. The best way to put it, I guess, would be to say that, as a comedic performer, he had taste.

His audition is amazing, all the tools there on display. He starts with the Dashiell Hammett–esque private investigator Chick Hazard (“I was a sucker for long legs. I wanted to shinny up one of hers like a native boy looking for coconuts”), then transitions to a slick, fast-patter infomercial pitchman hocking a stun gun, presaging his work on The Simpsons. Next up: Gunther Johann, a German comedian specializing in impressions of actors from Hollywood’s golden age. Then a vanilla news anchorman spouting non sequiturs (“Marijuana abuse among the elderly is rising drastically”); Jack Nicholson doing Hamlet; a shot at the late Charles Rocket, who was fired for infamously saying “fuck” on the air; and some closing bits he’d like to bring to the show, including “Playhouse 90” (“90-second dramas that are very intense”), a riff on Lifestyles of the Rich and Famous, and two quick impressions of William Shatner and Charlton Heston.

“Sexual Tension Diner” from the 1989-90 season is the kind of one-off character-driven sketch that would be hard-pressed to make air on today’s SNL, which is typically overly reliant on cameos. Hartman isn’t the star of that skit, but what he does is sublime; you know within a few seconds that his Earl is puppy-dog friend-zone in love with Jan Hooks’s Brenda the waitress. His acting coach creation Bobby Coldsman (“This is something. This is nothing.”) hits the bull’s-eye for anyone who has ever experienced the existential thirst and sublimated dread of an actual acting class.

He was the best kind of impressionist in that he didn’t go for slavish accuracy. Instead, much like Dana Carvey, he’d create these alternate-reality versions of the people he was imitating, conjured out of vocal hooks and behavioral tics. Did Ed McMahon ever say “You are correct, Sir”? I don’t think it matters. (It’s even funnier when you consider that Johnny Carson hated SNL.) Hartman’s lion in winter Frank Sinatra (“Sign-AID O’Connor!”) was so funny that the Sinatra family took issue with it, which should be the standard by which all Sinatra impressions should be judged. Hartman’s Bill Clinton at McDonald’s is the definitive SNL Clinton, and the way he delivers the line “Jim, lemme tell you something — there’s gonna be a whole bunch of things we don’t tell Mrs. Clinton” only gets better when you realize the skit aired six years before the Monica Lewinsky scandal.

So, here we go. Hartman vs. Ferrell. A fitting final for the two best to ever do it.