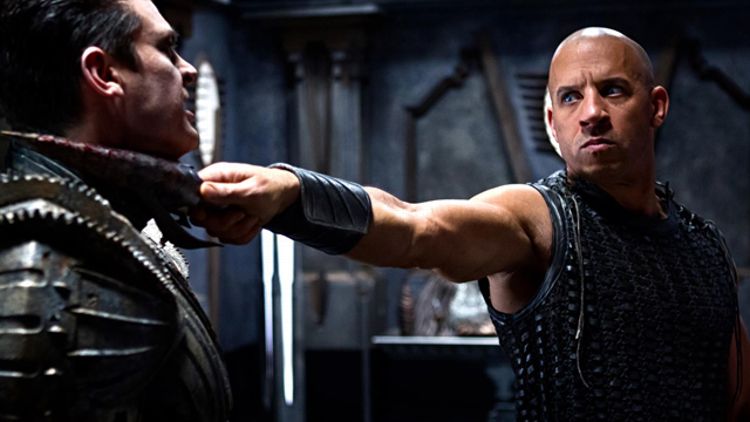 While the Hollywood fat cats are away (at Toronto combing the prestige film bargain bins for the next The King’s Speech), the bloodthirsty, intergalactic ex-con mice will play … That’s right, Vin Diesel’s Riddick threequel, counterintuitively named Riddick, was no. 1 at the box office this weekend! Even Universal’s distribution chief admits Riddick’s $18.7 million opening is kind of like winning $100 in the lotto: Don’t bother putting it toward the new car fund; just enjoy taking your significant other out for a nice dinner.

Riddick bested franchise-starter Pitch Black’s $11.6 million opening, though it didn’t come close to the $24.3 million of its ostentatious sequel Remember the Time — oops, I mean Chronicles of Riddick. Just to be clear, these numbers are not adjusted for inflation or the 3-D luxury tax. (By the way, I hope your brain cells are as fried as mine from being reminded that Magic Johnson was in Remember the Time, and that Dame Judi Dench has screen time with Vin Diesel.)

Since Diesel actually owns the rights to the Riddick character, he is well on his way to becoming king of video on demand. Hey, kudos to him for knocking late-summer juggernaut Lee Daniels’ The Butler from the top spot. Considering that Harvey Weinstein will not sleep until every man, woman, and child within 50 miles of an Academy voter has seen it, that’s no small accomplishment.

Neither is We’re the Millers’ stealthy accumulation of $123.8 million in box office gross. Then again, it would probably be a leading indicator of the apocalypse if Jennifer Aniston as a stripper wasn’t worth at least $100 million. Meanwhile, Shane Salerno’s highly hyped J.D. Salinger documentary, Salinger, raked in a respectable $91,000 in New York and Los Angeles, despite some blistering takedowns. All told, a decent haul for the low-attendance weekend better known as the quiet-before-the-storm of Oscar season.